Awright awready, Mr. Duterte, in 23 days you'll be the President of the Philippines, please be more secure now and build on our future, instead of being against all flags. On the 40th day of Chief Justice Renato Corona's passing to the bosom of the Lord, his martyrdom is eulogized by former Sen. Francisco Tatad at the NTC night during CJ's wake.

Fr. Eliseo “Jun” Mercado of the Oblates of Mary Immaculate, who hails from Mindanao, rightly observed that incoming President Rodrigo Duterte seems to be on the warpath against all flags. First, as Fr. Mercado noted, he went on a rampage against the Catholic Church, then vs.the media establishment, the UN agencies and now against the police and the AFP. Fr. Mercado ended his observation with a soft “cuidado” for the incoming Chief Executive.

Many of us are watching with bated breath as our President-elect basks in the limelight from the Malacanang of the South. Doubtless many find themselves agreeing on some points in his agenda but definitely against some of his attacks on institutions, as the colorful incoming Chief Executive goes through what columnist Randy David referred to as his “stream of consciousness technique” in his governance musings in Davao. Like Fr. Mercado I laud Duterte’s vow to combat crime and criminals, but I vehemently object to the vigilante-style fast becoming fashionable.

News the other night was that over ten vigilante-style killings have already been recorded in the CAMANAVA region alone!

Incoming President Duterte’s musings have to be well thought-out, for while the stream of consciousness technique he copied from Irish author James Joyce was an instant hit with literature majors two generations ago, like Duterte Joyce was tough to read and tougher even to understand. But Joyce we could just throw into the wastebasket, Duterte we have to live with.

For close to 23 years as mayor of the third-largest city, he spoke very locally. But once he got elected  President , not only the entire nation but the world has become his stage, and he can’t be too candid and casual anymore---as otherwise he faces condemnation over controversial statements, or worse, he becomes the laughing stock, a screwball.

Note that because of Duterte’s advocacy of vigilante-style tackling of criminality, once sane leaders like Cebu City’s Mayor Tommy Osmena are now mouthing offering sizable bounty for criminals killed or wounded.  But as worried Filipinos argue, what if the wrong person got slain, can it just be written off as a "wrong mistake?"

It’s a pity that the incoming President has to polarize media, both formal and social, this early, when the better thing to do would be to gain their help and cooperation in solving the horrendous problems this nation faces. Thus, what has become national concern are the quarrels during Duterte’s press conferences, when what should be their substance are his programs for the future---how he plans to solve all the gargatuan problems he’s inheriting from P-Noy. What’s happening today is that his media bureau is tripping over, trying to explain or undo what their boss just said. Being in the shoes of Peter Lavina  or Sal Panelo has to be the most unenviable job right now.

Mr. Duterte won the biggest plurality ever in the presidential race in this country, 16.6 million votes---enormous political capital. Thus, we should expect that this new President would  become more secure about himself and truly use his unprecedented popularity to serve the nation in positive ways and rally the people to unite, instead of causing this sharp polarization.

A friend of mine rode a taxi recently and was startled to find the cabbie so angry with Mr. Duterte for disrespecting women, when, as he himself confessed, two months ago he was so gung-ho over the guy. Let’s hope Mr. Duterte would sober up and stop being so insecure about himself. Awright awready, you’re President now. 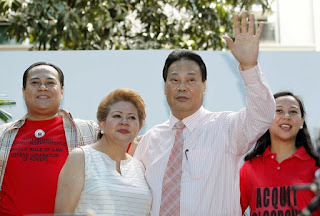 As we pause to remember today the 40th day of the passing of Chief Justice Renato Corona to the bosom of the Lord, allow me to reprint the beautiful eulogy delivered by former Sen. Francisco S. Tatad at the solemn wake held by the National Transformation Council, titled “God Knows  Him Well!” "Cardinal" Tatad goes"

“In this gathering of family and friends, we can only hope and try to console Tina Corona and children Carla, Francis, Charina and the entire Corona family, and indeed our own selves too, on the profound loss we all share upon the passing of Chief Justice Renato Corona.  But  we can add nothing to what the good Lord knows and has to say about our dear departed brother and friend Rene. God loved him in a special way, and he tried to correspond with all his imperfections and human weaknesses: so we pray, as we have prayed these last few days, that the good Lord will consider only his love and loyalty and not his human frailties.

"He lived a simple Christian life devoted to the service of God, family and country.  Simplicity and humility were the first virtues that shone out of his noble character and attracted his brethren on the Court, as Justice Roberto Abad told us last Sunday. But I did not have to hear it from Justice Abad: these were precisely the same qualities I saw in him when he and his brother “Toti" started working with me at the Department of Public Information in the '70s. I have no doubt that aside from his humungous brain and devastatingly good looks, these too were among the first qualities that drew Tina to his bosom when she consented to become his blushing bride in a wedding ceremony where I was privileged to stand as “ninong.”

Like the biblical Nathaniel, there was no guile in him. He took his faith seriously and tried to live it intensely.  This is why, as his former brethren would attest,  there never was a hint or breath of wrongdoing against him in the corridors of the High Court that has lately come into so much controversy and disrepute. He was a just man immersed in the love and holy fear of the Lord. On the shores of the Sea of Galilee, following the disciples’ miraculous catch of fish after that long empty night, our Lord asked his disciple Peter, “Simon, Son of John, do you love me more than these?” “Yes, my Lord,” Peter answered. Three times our Lord asked him, and three times he answered, and on the third time he finally said, hurting a little bit, “Lord, you know all things, you know that I love you.”

Our brother and friend Rene did not have to repeat those words; he tried to live them everyday in the service of God, family and country; he was the good and ever faithful servant. Now God has called him to His presence, and we mourn his passing, human as we are. But we know he is now looked after, so much better than when he was with us here, in a world where only love reigns and Death has lost its sting. Upon Lazarus’s death, Martha and then Mary told our Lord, one after the other, “Lord, if you had been here, my brother would not have died.” This moved our Lord  to tears, and moved him to raise his friend Lazarus from the dead after having been entombed for four days.

Well, our Lord has never left Rene’s side from the moment he was baptized and incorporated into the assembly  of the people of God under our Lord Jesus Christ.  He  never left him even when his enemies tried to take away his basic human dignity and worth which he had received from birth. And still, like Lazarus, he died. Why is that?  Why?  Because our Lord, who has resurrected and conquered death,  wanted to tell him that his special earthly mission was over and that he could now enter into the eternal joy of His Presence where there is no more doubt nor darkness nor pain nor grief nor despair.

The poet T. S. Eliot has a beautiful stanza in Little Gidding: 'We shall not cease from exploration and the end of all our exploring will be to arrive where we started and know the place for the first time.This is like dying, but death is more than this. It reaffirms our inextinguishable union with God.

We begin with God, and we end with God. In philosophy, we call this our First and Last End. We are never to veer away from this. Sister Death, as Francis of Assisi calls her, interrupts our journey only to transport the good and faithful servant to another world where eye has not seen nor ear heard, neither have entered into the heart of man the things which God has prepared for them that loved Him.  This is where we all hope to be reunited to all our loved ones after our earthly toil, and this is where we hope and pray our Lord has taken our dear departed brother and friend.

God wants a handful of men of his own in every human activity, writes a great saint, so that the peace and glory of Christ may reign in the kingdom of Christ. And He placed Rene in the vineyard of the Judiciary` to fertilize and nourish the Tree of Justice with the truth and love of the law, honor and personal sacrifice, so that it may bear the most abundant fruits. This entailed giving himself completely and unconditionally to the work at hand, even at the risk of incurring the wrath of the ill-willed and the unjust.   In Thomas More’s time, this might  have earned him certain martyrdom—-he might have had to pay for it with his blood. But even martyrdom has changed its manners and dress—-as the infamous impeachment trial had shown,  they destroy your honor while sparing your life. But it is martyrdom nonetheless.

But I have a sneaking suspicion that in this Rene found his “perfect joy.” What do I mean by perfect joy?  St. Francis of Assisi defines perfect joy as that which fills a pilgrim’s soul when after a long and terrible journey through wind and rain and snows and storms, he finally reaches his destination, hungry and tired, but finds his longed-for lodging already closed for the night; and instead of being welcomed with a bowl of soup, a hot bath and bed, he is driven away with curses and threats, and is forced to spend the rest of the evening in stormy weather outside.  In that situation, the pilgrim finds himself close to the suffering endured by Christ. He becomes another Christ—-alter Christus, if not Christ himself.

This was how I looked at Chief Justice Corona as he sat in that rigged impeachment court. No disciple is ever above his master. As our Lord drank the cup according to the Father’s will, so did our departed brother and friend drink his. He died embracing the Lord, and being embraced by Him in turn. In God’s grace, he lives, and will live on forever in the sweetest peace. God bless us all.
Posted by Veteran Journalist and Relentless Advocate of Truth at 10:04 AM No comments: