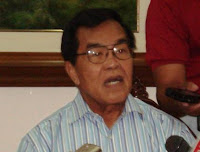 In my chosen profession I get books and books galore from publishers and authors. But one book has impressed me with the labor of love that went into it. This is the recently launched work titled “Constitutions of the Philippines and Basic Documents,” authored by former three-term Congressman and former Mayor of Cagayan de Oro Constantino G. Jaraula, who belongs to the UP College of Law, class ’60, that’s celebrating its Golden Jubilee this year. Now, you readers might say that sounds like a boring book, but I assure you that it’s far from boring. In fact, once you begin thumbing through it you can’t put it down.

It’s interesting to note that lawyer Jaraula deliberately did not run for the House of Representatives in the recent elections, even though he would have had no opponent, as he wants to concentrate on promoting and campaigning for charter change now. Hence, this book, which I like to call the “encyclopedia of Philippine constitutions and basic documents,” must be something so close to his heart and was put together to convince us Filipinos that we deserve the best basic charter in all the world. For one thing, I didn’t realize that aside from the landmark constitutions we have had---the Malolos Constitution, the 1935 Constitution, the Constitution of the Second Philippine Republic under Jose P. Laurel, the 1973 Constitution, Cory Aquino's Freedom Constitution and her 1987 Constitution---there were so many constitutions drawn up by our individual heroes such as Emilio Jacinto and Francisco Makabulos, and most notably, the paralytic Apolinario Mabini, known as the "Brains of the Revolution." There were also the constitutions proposed by various provinces that carried the fight against Spain even after the exile of Emilio Aguinaldo to Hongkong, such as Laguna, Negros and Central Luzon (this makes me mighty proud of the province of my father, Laguna). 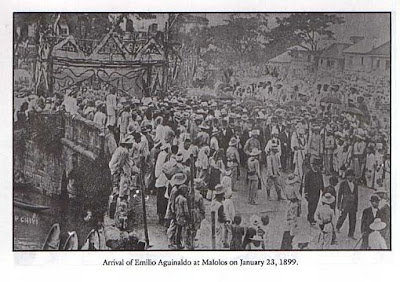 Lawyer Jaraula, who also taught at the Xavier University and the Liceo de Cagayan, regards all the basic documents he dug up and put together in the book---such as the “Kartilla” or teachings of the Katipunan, the Declaration of Philippine Independence, and even the Treaty of Paris by which Spain ceded our country (and Cuba) to the Americans---as contributing to the political development of the Filipino people. Much like the building of the cathedral of our people’s dreams and aspirations---step by step, stone by stone. I suggest that no school library, especially of the law colleges, should be without Jaraula’s book, if only because one can read all those documents there. There's even a section on how to go about the revision or amendment of the Constitution.

But what I like more than the cut-and-dried documents are his commentaries on each of them, which are refresher courses in Philippine history in themselves. It was evident from even a cursory look at Jaraula's book that our National Hero, Dr. Jose Rizal, dominated and inspired so much of the revolutionary activities of our forebears around the turn of the 19th century through his thoughts and writings, and long after he was shot through the heart at the Luneta on Dec. 30, 1896. That fact inspired Jaraula to first launch his book during the centennial of Rizal’s martyrdom in 1996 (my brother Roger Olivares, who boldly recast the characters of Rizal’s "Noli Me Tangere" in our contemporary times, in a book he titled "Noli Me Tangere 2,” would be delighted to get hold of Jaraula's book).

Jaraula’s book easily shows how politically and legally sophisticated our forefathers already were even before the turn of the 19th century, displaying a keen familiarity with the tenets of the European Enlightenment across the seas. But there’s an anecdote that Atty. Jaraula cited that ran contrary to what we know of that political sophistication. In fact American congressmen and the US public appeared to have such terrible impressions of the Filipinos at the time when our heroes were writing their own versions of the Constitution. The redeemer proved to be Rizal’s “Mi Ultimo Adios,” the immortal poem that has been translated into no less than 100 versions, with the first known Tagalog version supposedly written by Andres Bonifacio. This episode stands out in Jaraula’s book and I want to share it with every Filipino.
He recalls that in the early years of American occupation, there was a huge debate in the US Congress and among the American people as to whether it was wise for the US, as President William McKinley wanted to do as his “manifest destiny,” to colonize the group of islands in the Pacific so far away and populated by a people with a terrible reputation for barbarism and extreme backwardness (recall the ditty about the “monkeys without tails” in Zamboanga?). Congressman Henry Allen Cooper of Wisconsin, chair of the Committee on Insular Affairs, had sponsored the bill which was to extend to the Philippine Islands basic and fundamental constitutional rights and establish a popular assembly. Referred to popularly as the “Cooper Bill,” its formal name was to be the “Philippine Bill of 1902 and later the “Organic Act of the Philippine Islands.”

Cooper’s bill was meeting with congressional fire and brimstone, especially from constituencies where American fathers and mothers had lost sons in the far-away Filipino-American War. As Jaraula noted, the Anti-Imperialist League fanned the flames of opposition. Whereupon Cooper saw it fit to deliver before the US Congress the English version of Dr. Rizal’s “Mi Ultimo Adios” and, as Jaraula narrated it, “at the end of the recital, and shaking with emotion,” the Wisconsin congressman rhetorically asked:

‘ “Pirates, Barbarians, Savages, Incapable of Civilization!” ‘ How many of the civilized slanderers of his race could ever be capable of thoughts like these…Search the long and bloody roll of the world’s martyred dead and where---of what soil, under what sky---did Tyranny ever claim a nobler victim...It has been said that if American institutions had done nothing else than furnish to the world the character of George Washington, that alone would entitle them to the respect of mankind. So, Sir, I say to all those who denounce the Filipinos indiscriminately as barbarians and savages, without possibility of a civilized future, that this despised race proved itself entitled to their respect and to the respect of mankind when it furnished to the world the character of Jose Rizal.”

In our radio program, Atty Jaruala asked Cecille Alvarez, the Magsaysay Awardee for Theater, to read that dramatic speech of  Cooper praising Rizal's genius. I must confess that though it has been 108 years since the Wisconsin legislator recited that ode before his US colleagues, it was still music to our ears.

Dr. Nicolas Zafra pointed out in his “Jose Rizal: Historical Studies, 1977,” that the Cooper bill was approved on July 1, 1902. Doubtless the delicious lyricism of “Mi Ultimo Adios” proved to be a wise strategy for Rep. Cooper. As our country works its way to the second centenary of Dr. Rizal’s martyrdom, it behooves us Filipinos to nurture and maintain the respect of mankind that he so gloriously earned for us with his blood and his pen.

Posted by Veteran Journalist and Relentless Advocate of Truth at 8:09 AM