On the morning of President Aquino’s inauguration, I called in my household staff (two househelpers, a driver and a handyman) to watch the proceedings over the bigger TV screen with me in the library. I wanted them to watch a most historic event, and it was a good way to gauge their reactions to different scenes as they unfolded.

My house staff was dazzled and awed by all the celebrities in their gorgeous gowns (to this veteran journalist it was the most elegant inauguration we have had) and all the stars and entertainers. They were particularly taken by the elegance and beauty of the presidential girlfriend, Councilor Shalani Soledad, who looked regal and elegant in her yellow terno, swept-up hair and that seeming shyness. My househelpers waited for her to exchange beso-beso with the presidential sisters, but the TV never gave that opportunity. Ano pa ba ang inaantay ni Noynoy? Bakit hindi pa niya pakasalan ito? Gerry the driver said. They were also quite amused that ex-Presidents Fidel Ramos and Joseph Estrada found themselves sitting next to each other but weren’t talking.

The house staff’s interest began to really stir up when President-elect Noynoy’s car entered Malacanang and he proceeded to the Guest House to await the proper time to fetch his predecessor and escort her to the Luneta where the fulcrum of power will shift. Everyone in the room thought President Macapagal Arroyo’s eyes were a bit puffed and my cook Marie quickly concluded she must have done quite a bit of crying. Why not, said Beth the cleaning girl, if you’re about to leave the place which has been your home for nine and a half years, you’d really feel bad. I hope she won’t break down and cry, said Gerry. No, said handyman Doming, that woman is a tough cookie. Remember how the Hyatt 10 people tried for five years to remove her from the Palace, but they got nowhere, he said.

My house staff noticed everything: how GMA, regal in her pina terno, walked around and shook hands with everyone, and gave one particular Palace personnel a big hug. At that moment, they thought she’d cry but she didn’t. Then Noynoy, looking already presidential in his barong, crossed the Palace grounds and met GMA as she descended the historic grand staircase of Presidents for the last time. My staff thought their shaking hands, repeated a couple of times for the swarm of photographers, was “sobrang awkward.” Mi-hindi tumingin si Gloria ki Noynoy,” observed Marie. In the brief ride to the Luneta, which media earlier speculated must be like eternity to P-Noy, thank God GMA found something to talk about: the report on Philippine education that Fr. Bienvenido Nebres’ committee had finished and which GMA promised to endorse to her successor.

Once Car No. 1 got to the Luneta my house staff grew stiff with anxiety: it was the moment of goodbye for GMA to the nation and a new beginning for her successor. They watched keenly as she trooped the line for the last time, saluting the AFP officer who addressed her as “Madame President” for the last time. My girls held their breath as for one brief moment, GMA looked like she was going to break down and cry, but she didn’t; instead she pasted on a smile throughout that pained ceremony. My staff continued to be edgy: would she be booed by that hostile sea of yellow? Sana wag madinig ni GMA kung may mag-booboo, said soft-hearted Beth. Later news reports said the boos from the yellow grandstand was loud, but there was some scattered applause from the hoi polloi. GMA just walked on with her pasted smile and her composure intact; after a fast handshake with her successor who seemed unsure whether to escort her to her car or not, she got into her car, and later sped on to Pampanga to be sworn into her new role as legislator; P-Noy ascended to the grandstand of history as the 15th President of the Republic.

It was at that point when the two Presidents were about to part ways that Vice President Jojo Binay drove by in his electric-run jeepney, looking quite sheepish. My house staff went crazy and jumped up and down. Masyadong magnakaw ng ecsena si Binay, they screamed. 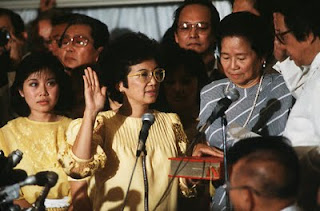 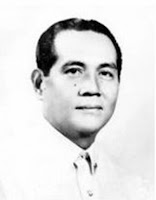 perhaps because, apart from their teacher-student status, the LP candidate had uttered some acrimonious words about the sitting president during the campaign. Since we’re on the subject, it’s fitting here to recall the historic ride to the Luneta of incoming President Marcos & his predecessor, outgoing President Diosdado Macapagal on December 30, 1965, for the swearing-in of Marcos. They had been bitter rivals in the previous election of 1965, where Marcos defeated reelectionist Macapagal; but before leaving the Palace, Macapagal invited Marcos to pass by the little chapel at the foot of the grand staircase and, as Macapagal wrote in his book, “A Stone for the Edifice—Memoirs of a President (1968 edition), they knelt there together in “a one-minute prayer for the welfare of our country.”

What a beautiful historical tidbit indeed, what sign of civility and grace between old bitter political enemies. This tidbit was courtesy of my good friend, election lawyer Romeo Macalintal, who was personally gifted by the late President Macapagal a copy of that autobiography in which that passage was featured.

Posted by Veteran Journalist and Relentless Advocate of Truth at 10:22 AM