Election violence is directly related to some politicians' willful instinct to prevail at all costs---with massive vote-buying among poor sectors. They recoup "investments" by monkeying with PW funds to ensure dynastic rule. When dynasty is threatened, that's when violence erupts. How to break this evil? Rescue masses from abject poverty by revving up the economy and educate them, so they become independent of pols. 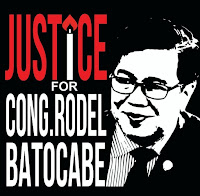 Since the heinous slaying of Bicol Ako party-list Rep. Rodel Batocabe by still unidentified assailants, his widow, Gertrudes Duran Batocabe, has won a lot of sympathy and admiration for her courageous and dignified response to this tragedy.

During President Duterte's visit to Daraga City to condole with the congressman's family, Mrs. Batocabe, a member of the prominent Duran family in Bicol, sought justice for her slain husband from the Chief Executive. That the criminals who killed the respected law-maker ought to be caught and punished is the least that the administration could do for his family.

To Mr. Duterte's invitation that she run in her slain husband's place in the May 2019 elections, she replied candidly that right now her focus is "to bury him with dignity and honor, in accordance with how he lived." After this, said the widow, she will seek justice for him---that those responsible be brought to court and punished.

With the slaying of Rep. Batocabe, the threat of political violence across the country rears its ugly head anew as the May 2019 mid-term elections approach. Mr. Duterte contributed P20 million to the financial reward offered by Rep. Batocabe's party-list colleagues to anyone who could provide clear leads to his slaying.

Reward money to identify the killers now stands at P50 million, and perhaps it would bring results, but election violence remains in the political scene every campaign season---unless certain factors are checked and eliminated from our midst.

Political rivalry exists in every setting all over the world, even in the politically and economically advanced countries such as the US, but in less developed political settings such as ours, it's accompanied frequently by violence. The slaying of Rep. Batocabe in so brazen a manner in Daraga, however, speaks of grievously degenerated standards in our very Third World political setting. Facts about his slaying are not all in yet, as PNP investigation is still going on, but it is easy to see that in our milieu many politicians feel they stand to gain so much in office, that they are ready to eliminate rivals by means fair or foul.

While there are few exceptions, it's obvious that political contests in this country have become so expensive for the candidates---this is because it's almost impossible for politicos not to resort to buying votes at exorbitant costs, to win. Citizens, on the other hand, often sell their votes to the highest bidder because many of them have remained very poor, and election time is seen as their opportunity to gain some fast bucks with their votes.

I dare say that with few exceptions, our citizens look at the elections as opportunity to get their revenge on neglectful and abusive politicians---by exacting their pound of flesh through their votes.

Politicians doubtless realize the truism that elections are revenge time for the voters, so the pols have to buy votes---and it could run into hundreds of millions of pesos or even billions in some cases for the politicians, if, for instance. they have to ask a rival to withdraw.  Lots of votes are for sale and voters are not coy about it---in fact they feel a strong sense of entitlement about it. This is their revenge every election time on politicos who have paid only token care for their welfare.

This realization that the electorate would extract its pound of flesh from the politicians has made the latter, with some exceptions, utilize their pork barrel funds---formally termed years back the Countrywide Development Fund and later the notorious Priority Development Assistance Fund (PDAF)---in all manner of wheeling-dealing with contractors of public works projects or with insidious characters like Janet Napoles, to raise funds to buy votes.

Note Sen. Panfilo Lacson's loud complaint about how House solons are still trying to insert pork items into the 2019 budget despite its passage on second amendment already, when no insertions should anymore be tolerated. That's obviously desperation on the part of those running this May 2019.

Another way to win is to eliminate political rivals, which may have been the case with the late Rep. Batocabe---though this has enraged the Bicolanos so much that it could boomerang on the perpetrators.  His slaying can be explained thus: over the years Filipino voters, by and large, have come to expect grease money during elections---which is why politicians have to be creative in their staying power.

Corruption rears its ugly head in various ways and perhaps those candidates perceived to be uncorrupt, like the slain Bicol party-list solon, have to be yanked out of the race by hook or by crook.

This is also why political dynasties seek to survive: the palm-greasing practices exacted from the pols by the largely impoverished voters continue unabated, so that political power has to be preserved within the family over generations---by hook or by crook---to recover its investment.

To be sure, political dynasties also exist in the more advanced countries. In the US, the Kennedys, the Bushes, the Rockefellers and the Daleys of Chicago, among others, are normally mentioned in dynastic terms, but it is not the same as here. The American public---and the US media---are generally unforgiving of political abuses, and public opinion there is mighty strong, unlike here where it often fails to rightly condemn.

The Center for People Empowerment and Governance (CENPEG), headed by my good friend Prof. Bobby Tuason, estimates that more than 17,000 national and local positions, including all 265 seats in the House of Representatives and half of the the 24 seats in the Senate, are at stake in the May 2019 national and local polls. CENPEG also estimates that there are about 250 political families---at least one in every province---in the entire country, and of the 265 House members, 160 belong to such clans.

CENPEG regards political dynasties as a consequence of our country's colonial days, in which an elite class was nurtured by the Spaniards and later by the Americans. Even after our country gained independence in 1946, the largely feudal system persisted, as landed families sought to protect their interest by occupying public office.

Unfortunately, then as now, their constituents on the ground---unlike those of the more politically developed countries---have remained largely poor and uneducated, thus pretty much at the mercy of the politicians. No way to change our country except through education, which should also rescue the poor from numbing poverty.


Posted by Veteran Journalist and Relentless Advocate of Truth at 2:32 PM