If President Duterte is criticized for missing events in ASEAN meet in Singapore due to what Sal Panelo terms PRRD's "power naps," think of sleepless nights US President Trump is having from Melania's tantrums and Democrats' capture of House. A prelude to his impeachment? 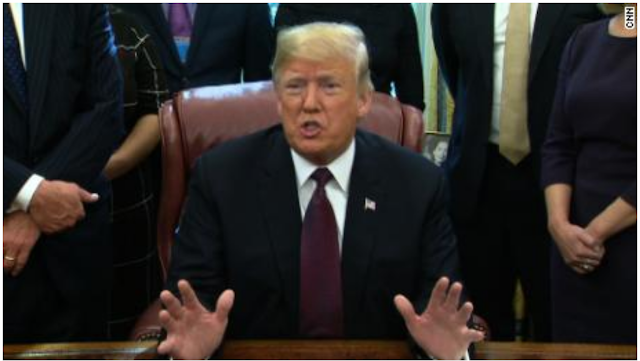 Prior to the US mid-term elections last Nov.6, Republican President Donald Trump had been boasting of a “red wave” coming, whereas the Democrats were bragging about a “blue wave” to sweep America. Soon enough, however, general consensus on the US mid-term elections became clear, or so it seemed.  Thus, although the Democrats regained the House of Representatives for the first time in eight years, no blue wave seemed to have materialized.

A week later, however, the steady trickle of further gains in late results in some battle-ground states appeared to reveal a far more positive picture for the Democrats. A giant blue wave alright.

The Democrats picked up at least 32 seats in the House and are on course for four more, in addition to flipping seven governorships and eight state legislative chambers.

Speaking of Sen. Flake, this outgoing Republican recently lashed out at party-mate President Trump, warning him and the "Grand Old Party" that if they tried to remove Special Counsel Robert Mueller---who's investigating allegations of Russian interference in the 2016 general elections that made Trump president in 2016--Flake would block any and all of Trump’s judicial nominees in the Senate.

US Attorney General Jeff Sessions, a Trump appointee, was fired allegedly for looking too closely over the shoulders of Mueller as he scrutinized the supposed Russian intervention that caused the defeat of Trump rival Hillary Clinton. Can we imagine such independence akin to that demonstrated by Sen. Flake, in any of President Duterte’s party-mates here?

What the overall results in the nationwide mid-term elections of Donald Trump's presidency represent is the Democrats’ best mid-term performance since 1974---a vote which came in the wake of the infamous Watergate scandal that triggered the resignation of Richard Nixon.

Trump, who last week declared election night to have been a “tremendous success,” has since been reduced to making baseless allegations of vote fraud to explain knife-edge contests in key states such as Florida,  Mississippi and Arizona.

After securing a significant majority in the House, the Democrats have broken the Republican monopoly in Washington and secured the power to block the president’s legislative agenda as well as significant appointments of his ---principally through FILIBUSTERING, something not seen in the House of Representatives since 2013.

That there’s huge trouble in the Trump White House is demonstrated by the way his mood has turned increasingly foul!  “He’s pissed--at practically everyone,"  a White House official said.   After the election disaster, another rock was thrown his way when First Lady Melania Trump publicly demanded that her husband's loyal backer, Mira Ricardel, who was personally chosen by National Security Adviser Jim Bolton to be his deputy, be fired.  Apparently, Ms. Ricardel drew the First Lady’s ire when she clashed with Melania’s staff about the seating arrangement inside the plane enroute to Melania's visit to Africa.

Trump didn’t immediately react, but White House staffers were shocked that the message from Melania (who holds office in the East Wing) flew directly to the West Wing, thus breaking protocol. The President eventually said that Ms. Ricardel will be moved to another sector, but days later, Mira Ricardel voluntarily resigned---obviously to save her boss from further embarrassment and avert a huge domestic crisis in the White House.  Pundits commented that Melania proved who is the real power there.

In fact, the atmosphere in the White House these days is described as "bleak," and talk is that various top officials are preparing to exit ahead of the rumored "purges" by President Trump. CNN reported that George Conway, husband of White House counsellor Kellyanne Conway, has now become an outspoken critic of Trump---asserting that he'd "rather leave the US than vote for Trump again." Interestingly, House Republicans are said to plan to summon Conway.

Another explosion: recall that CNN star reporter Jim Acosta was stripped of his press pass after a clash with Trump last week. CNN promptly sued Trump---stressing that Acosta's constitutional rights had been violated by the President, five members of the Administration and the Secret Service.

Well, the latest is that a Federal judge ordered the Trump Administration to restore Acosta's WH press pass. Could we see a Philippine judge coming to the defense of a harassed reporter vs. the President?

As if things weren’t bad enough for Trump, his recent official trip to Paris to join other world leaders in celebrating the 100th anniversary of the end of the First World War turned out to be a similar disaster.  During his European trip, he appeared to have been purposely isolated from other dignitaries---standing alone at times while other leaders exchanged pleasantries and chatted among themselves.

French President Emmanuel Macron, who hosted the gathering of world leaders in Paris, decried in his speech the new wave of nationalism, and everyone seemed to think that his words were aimed directly at the US President.

To make matters worse especially on the home front, on his last day in Paris, Trump was prevented by his top aides and the Secret Service from visiting the vast American Cemetery in the once blood-soaked battlefields of Normandy in northern France, because the heavy rains were deemed unsafe for his helicopter to fly.

The irony, however, was that other top American officials with him were able to participate in the ceremonies there despite the weather. Could the Secret Service agents be trying to embarrass the President in so doing? Trump was fuming!

Soon after he got back to the US, Trump unleashed a barrage of tweets directed at President Macron and the French people in general.  He insulted Macron by mocking him for his dismal ratings in the French polls.

The French President fired back---asserting that Trump lacked the “common decency” in unleashing those barbs directed at the French ON THE VERY DAY OF THE ANNIVERSARY OF THE 2015 TERROR BOMBING IN PARIS THAT KILLED 130 PEOPLE.

There’s no easy way out for Trump’s funk, says CNN. The  imminent revelation of Robert Mueller’s findings on allegations of the 2016 US election shenanigans caused Attorney General Jeff Sessions his job. Trump didn’t like the way Sessions was too keen on the trail of those alleged shenanigans that could have caused Democratic presidential candidate Hillary Clinton (my candidate) to lose to Trump.

Then there’s the blistering November 2018 loss in the mid-term elections , and prospect of indictments coming from the Democrat-controlled House of Representatives in the next few months. There’s also Trump’s own lawyer’s expected testimony against him as part of that official’s plea bargaining to save his own skin. And don’t forget the continuing legal troubles Trump has run into with women from the past.

All these are weighing on Mr. Trump right now, as the cloud over his head turns increasingly dark.

Posted by Veteran Journalist and Relentless Advocate of Truth at 9:42 PM