President Duterte graces PDP-Laban celebration where Nene Pimentel serenades him with popular postwar ditty, "You are my Sunshine, my only Sunshine." Bigger focus, however, on Sara's "Hugpong ng Pagbabago" especially given Duterte's recent revelation about his desire to "step down" and Star's banner today about his intention to join Sara's HNP. Query: is HNP preparing Sara for "succession to the throne?" 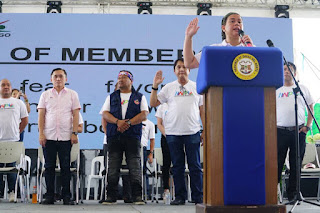 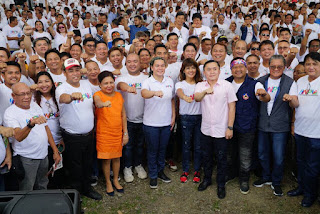 Last Wednesday evening,  Aug15, PDP-Laban, the party founded by former Senate President Aquilino “Nene” Pimentel Sr and son, former Senate President Aquilino “Koko” Pimentel III, held a reunion at the GSIS compound next to the Senate, to launch its "PDP-Care" program for typhoon victims. Gracing the occasion was no less than President Rodrigo Duterte who ran and won under its banner in 2016.

It seemed like a convivial gathering of political forces,  so that 85-year old Nene Pimentel---all white hair now and voice raspier than  ever---even took to singing the American ditty popularized during early post-war years,  “You Are My Sunshine, My only Sunshine,” and dedicated it to Mr. Duterte, "who has always been my sunshine.” The President, staying late into the evening, graciously acknowledged Nene's tribute.

Behind the festive atmosphere of the PDP-Laban celebration,  however, loomed  the shadow of the new “regional party” announced days ago  by presidential daughter and Davao Mayor Sara Duterte, the “Hugpong ng Pagbabago” (HNP), in a launch in Paranaque City..  Like an ultra-powerful magnet, the HNP instantly attracted various political groupings---though most of them were hardly the “regional” type.

To be sure, there was initially a sprinkling of regional politicians from Mindanao and the Visayas at Sara’s launch---a total of 11 governors. More  significant, however, were those from the national political parties who flocked to the HNP launch, flaunting the Duterte signature fist-bump.

Adding to the political excitement over this new "regional" party is the fact that today, Friday, Aug. 17, the Philippine Star headlined that Duterte will join Sara's HNP. This news headline should not be treated with incredulity, however, as blood is thicker than water, most especially in politics.

Boosting the HNP were national figures like Sen. Cynthia Villar and Rep. Pia Cayetano of the Nationalista Party, whose son and sibling, respectively, are key members of the President’s Cabinet---namely Secretary Mark Villar of Public Works and Secretary Alan Peter Cayetano of Foreign Affairs.

Statistics-wise, attendance at Sara Duterte’s HNP launch may still be too insignificant to be touted as a “regional party:” 2 out of 23 senators; 1 House member out of 292 members; 11 of 81 governors.  But noteworthy was Sara's release of  HNP's initial list of senatorial candidates to back up for the 2019 mid-term elections:  former PNP Chief Bato de la Rosa, presidential aide Bong Go (despite his frequent denials, he went around distributing relief goods during the storm) and Sen. J.V. Ejercito.  Certain to also be included is Harry Roque.

Sara was quoted saying that the HNP supports the ruling PDP-Laban and has no wish to take away its members. As she put it, “We do not meddle with the factional problem of the PDP-Laban.”

With the entry into the national political ring of the new “regional” party from the South, however, all eyes would be on the fate of  PDP-Laban, the party under which Mayor Rodrigo Duterte ran for the presidency in 2016 and won.  PDP-Laban leaders have admitted that some of their politicos are flocking to HNP, and this has led to “confusion” among party leaders as PDP struggles for unity and survival ahead of the 2019 mid-term elections.

At the outset, Mr. Duterte was quoted saying he has nothing to do with the HNP of his daughter, but he is also set to grace the  swearing-in and oath-taking of its political leaders.  As if to make amends, however, he also attended the anniversary celebration of PDP-Laban last Wednesday.

Then came the expected, delivered by the Philippine Star headline today: Duterte is joining HNP.  The question now is, what happens to PDP-Laban with its "super-majority," if Duterte himself is abandoning the party he won under?

The situation is becoming tough for PDP-Laban. Senator Koko Pimentel, a stout ally of the President, was yanked out of the presidency of the Senate and the party's majority leader, Sen. Tito Sotto. was installed in that post.  Koko admitted in media that “the possibility of HNP endorsing national candidates could be an issue to the ruling party.” Clearly an understatement.

Governor Anthony del Rosario of Davao del Norte,  one of the HNP stalwarts, admitted that his group did not anticipate “the level of interest that other political parties had with (Sara Duterte) Carpio’s party.”  Del Rosario also stressed anew that the HNP supports President Duterte’s political agenda and will endorse 8 senators all supportive of him.

Sara Duterte, however, does not seem confused and in fact was candidly quoted in media as saying, “I am confused with (the PDP-Laban’s) confusion.” HNP,  she insisted, “is not a national political party. Perhaps the right way to put HNP in perspective is that it's a 'regional party' with super-strong 'national links.' ”

One grizzled LP stalwart who has seen administrations come and go over decades, noted to this blogger the super-strength demonstrated by Sara Zimmerman Duterte-Carpio, e.g., the unceremonious ouster of the object of her reported ire---Speaker Pantaleon Alvarez, who was replaced by Pampanga Rep. Gloria Macapagal Arroyo. This  pundit also noted  the easy removal of staunch presidential ally Koko Pimentel from the Senate Presidency and his replacement by Majority Leader Tito Sotto, also of PDP-Laban. In both cases, noted this pundit, "both party leaders were ousted without Malacanang throwing its vaunted “life savers.’ ”

If this analyst is to be believed, we are witnessing in the HNP today preparations for "succession to the throne.”  This theory becomes especially fascinating in the light of yesterday's Inquirer banner:  “DU30: I’m thinking of stepping down.”

Sara Duterte as defender of the political fate of her father, especially if it should worsen, or as eventual successor to the throne through an electoral coup in 2022?  Any which way, Duterte's popular daughter is---as the French would say---"tres formidable."

Posted by Veteran Journalist and Relentless Advocate of Truth at 7:36 PM