US President Trump---widely viewed as unstable and tantrum-prone—could emerge as winner in the Sentosa high drama with Kim, who also wants to score as a debuting closet statesman. Here at home, Senate and House leaders brace for tug-of-war over BBL which Digong wants as his SONA centerpiece. 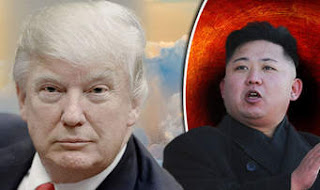 The world will be keenly watching for dramatic developments as US President Donald Trump and North Korean Leader Kim Jong-un sit down today, Tuesday, to talk peace and  the de-nuclearization of the Korean Peninsula in Sentosa Island---once a British Army artillery mess but now one of Singapore’s most luxurious resorts.

More things set the two leaders apart than bind them: Trump is 72 while Kim is a little less than half his age at 34. For many decades their two countries had been estranged. In 1948, with the aggressive communist thrust into Asia at the close of  World War II, another war erupted in the Korean Peninsula and the US supplied men and materiel to buttress the Free World forces sent there to contain the Communist advance. This included the Philippines.

The Korean War officially ended in July 1953 with the Americans sustaining 36,974 soldiers killed, some 103,284 wounded in action and 7,704 still unaccounted for as of April 2018.  America spent $67 billion in that war, with an armistice resulting in a demilitarized zone (DMZ) between the two Koreas---but without a peace treaty ever signed between the protagonists. Thus, technically, the Korean War had never ended.

For decades, North and South Korea remained separate entities with hardly any interaction except for some efforts by religious groups to penetrate the North Korean communist curtain. That country retreated into isolation as leadership passed through three dynastic generations---from patriarch Kim Il Sung to his son Kim Jong-il and now to his grandson, Kim Jong-un. Young Kim drove North Korea to develop its nuclear capabilities at the high cost of draining the economy and impoverishing his country and people.

But most significantly, Kim Jong-un pledged to dismantle nuclear weapons that at one time were deemed ready enough to aim at the heartland of America.

Now comes this historic meeting between Donald Trump and young Kim Jong-un in Singapore. Some critics are plainly skeptical about how sincere is Kim’s declared intent to abandoning his nuclear program. They opine that it could be just a ploy to get the US to ease crippling economic sanctions that have wrung the impoverished kingdom dry. The street-smart Trump---a business mogul before turning politician---is seen, however, as first insisting on “verifiable proof” of North Korea’s dismantling of its nuke arsenal, before offering some economic aid.

Still and all, whether Korean watchers are simply naïive or hopelessly optimistic, the world is better off with political leaders meeting and drinking to one another’s health in luxurious Sentosa Island, than firing those missiles across the world.

This early, it’s easy to see that President Trump, whom the American people---and the world---largely view as a bit zany and unpredictable, could come out of Sentosa a winner if he and the equally zany Kim end up agreeing on even a little something---like dismantling some of those nuclear toys of Kim. .The 34-year old Korean leader would also definitely gain in stature from looking and acting like a statesman in quest of peace Singapore---instead of what the world remembers: how he executed dozens of his men.  .

Here at home, political analysts will be watching what happens to the bicameral conference committee that will seek to reconcile the House and Senate versions of the Bangsamoro Basic Law (BBL) this coming June 9 to 13. Talk is that President Duterte intends to make the BBL the centerpiece of his 3rd State of the Nation Address this July 23 before Congress. In fact, he has certified the BBL bill as urgent and wants it on his desk on July 23 morning for his signature. .

Problem is that House Bill No. 36475 and Senate Bill 1717 contain certain passages that each chamber plans to stand pat on and are therefore considered pretty contentious.

For instance, in the Senate version, the Bangsamoro people shall be considered “citizens of the Republic of the Philippines and their area in Mindanao shall be their “territorial jurisdiction” instead of their “core territory” as some Moro leaders want, and some House leaders are willing to acquiesce to.
On the other hand, the senators appear more concerned that the BBL be more compliant with the 1987 Constitution, so that it could pass muster in the Supreme Court, where it is almost certain to be challenged, according to Sen. Miguel Zubiri, author of the BBL.

Fr. Eliseo Mercado, OMI, who was among the panelists at the “National Conference on BBL & Federalism”  at the Dusit Thani Hotel in Makati last week, opines that the chances of the BBL’s passing is greatest under the leadership of President Duterte. This is because Mr. Duterte hails from Mindanao and he has been quite open since the beginning of his administration to amending the Constitution to convert the country to Federalism.  Fr. Mercado asserts that the shift to Federalism and the adoption of the BBL are “the twin pillars of peace.”

And so, just as the whole world will be watching how the Trump-Kim Jong-un summit works out in Singapore, on a smaller scale, but equally impacting on the peace situation especially in the Asean region, the fate of the BBL in the next weeks and months will be assiduously followed.

Posted by Veteran Journalist and Relentless Advocate of Truth at 11:26 AM