Duterte should have left the sacking of Rappler entirely to SEC, and stayed away from making the bruising fight his own. Foreign reactions mount in protest of the SEC move, but it still has failed to dent Duterte's popularity here at home. What gives? 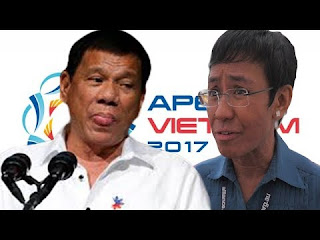 There's tremendous uproar over the recent closure by the Securities and Exchange Commission (SEC) of the nearly six-year old Rappler, Inc. on the charge that it has violated the Constitution’s restriction on foreign ownership of local media, continues. The SEC, headed by P-Noy appointee Teresita Herbosa, has also accused Rappler of violating the anti-dummy law, the Corporation Code and the Securities Regulation Code.

SEC has revoked the news outlet’s certificate of registration, alleging that Rappler, Inc. ”sold control to foreigners”---even as its closure extended to the stockholder which owns 98.77% of the company, Rappler Holdings Corporation, headed by Benjamin Bitanga, who is  Filipino. SEC accused Rappler Holdings of “existing for no other purpose than to effect deceptive scheme to circumvent the Constitution.”

The closure of Rappler comes in the heels of a number of administration moves that bring into serious question---especially abroad, judging from various foreign reactions---what appears to be its ineluctable drift toward authoritarianism and strong-man rule. The overtures in Congress about the possibility of a "No-El" scenario only succeed in reinforcing this unhealthy perception abroad about the administration's drift.

Very recently a prominent senator from President Trump's Republican Party, Arizona Senator Jeff Flake, in a privilege speech delivered IN THE US SENATE NO LESS, lumped President Duterte with other leaders, including his party-mate Donald Trump who had been attacking news media and accusing them of propagating "fake news."

Citing how Mr. Duterte had complained of being "demonized" by "fake news," Sen. Flake recalled the recent ASEAN Summit in Manila where the Philippine President, with President Trump "laughing by his side," called reporters "spies." Flake said that though that statement appeared to be a joke, still, "nothing was funny about the emergence of dictatorial leaders who attacked news media when the truth started to hurt them."

The shut-down of Rappler would not have hurt Mr. Duterte's image as much had he just let the SEC do the dirty job vs. the news site.  That move could have been argued by SEC, as  Sec. 11 (1)  of Article XVI, “General Provisions,”  of the 1987 Constitution specifies that “The ownership and management of mass media shall be limited to citizens of the Philippines, or to corporations, cooperatives or associations, wholly owned and managed by such citizens.”

SEC fell on the provision that Congress “shall regulate or prohibit monopolies in commercial mass media when the public interest so requires. No combinations in restraint of trade or unfair competition therein shall be allowed.” SEC then zeroed in on the issuance by Rappler Holdings to “Omidyar Network Fund LLC---a fund created by ebay founder Pierre Omidyar and wife---of what are called “Philippine depositary receipts” (PDRs). To SEC those PDRs represent tools of ownership.

SEC’s action may be appealed within 15 days, but it has already created history in that, as noted in media, revocation of Rappler's license “was the first for both the commission and the Philippine media.”

If Mr. Duterte was smart, what his administration should have done was to studiously keep out of the SEC-Rappler dispute and just let them fight it out. Unfortunately, he came out in an interview showing articles from Rappler that were outright against his administration. His communications people jumped in too, and the issue of violation of the Constitution---which can be argued by smart lawyers---morphed into a campaign instigated by the President to get Rappler for its attacks against him.

Recall that in his 2017 State of the Nation Address, he already attacked Rappler as foreign-owned, thus violating the Constitution; he later followed this with the accusation that the CIA was funding the online website. Palace communications officials began making life difficult for Rappler---e.g., Mocha removed it from the Palace website.

The SEC had admitted in one instance that it had been deliberating on the Rappler case since December 2016---only six months into the current administration---when it received a request from the Office of the Solicitor General for an investigation of the news website and Rappler Holdings Corporation.

The battle has become personal between the President and his men, and the news website. Feisty broadcast journalist Maria Ressa---who heads the Rappler media group composed mainly of daunting women scarred in journalistic battles over the years---has vowed to fight for her organization’s right to exist and operate. The SEC case  has aroused fears in local circles of  increasing media censorship by the administration.  Observers, recalling what happened to the Inquirer, are now watching what could become of ABS-CBN.

Tie that to talk in the House of Representatives about a No-el scenario and one can imagine the reactions from abroad as well.

Interestingly, however, despite fierce criticisms, Rodrigo Duterte's popularity remains at an all-time high here at home---the highest for any Philippine President at this comparative stage in his administration.  This is the paradox of his zig-zagging leadership.

Posted by Veteran Journalist and Relentless Advocate of Truth at 10:38 PM