The “Field Marshal” of the ASEAN@50 celebration is a seasoned diplomat, but an even more seasoned events organizer and military-trained strategist---Ambassador Marciano “Jun” Paynor of PMA Class '71. Since the time of FVR he has walked Philippine presidents through their state visits abroad. 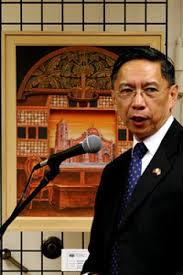 In two or three days’ time will begin the “lock down” of areas of  the metropolis where 21 heads of state from three continents will converge for the 31st ASEAN SUMMIT in Manila---that also celebrates the 50th anniversary of the birth of the regional grouping in our part of the world.

At 50 ASEAN is middle-aged and has all the agony and the ecstasy of glorious mid-life.  On hand to prevent this mid-life stage of the regional bloc from becoming a MIDLIFE CRISIS are the Armed Forces of the Philippines and the Philippine National Police which will doubtless enforce the tightest security ever in the history of this country.

Consider, for instance, that Manila Bay would be a “No sail zone” and that the expressways will enforce a truck ban as all the foreign dignitaries will be flying in through Clark Airport. Consider too, that a lock-down of the Cultural Center of the Philippines Complex would mean that personnel of all the establishments within it would also be locked in from Nov. 12-15.  For instance, personnel of station dzRH in the Manila Broadcasting Company beside the CCP will be sequestered in the building for three days---sleeping in portable bunk beds with food already brought inside.

This blogger joins the entire Filipino people in wishing the ASEAN Summit in Manila huge success, and let us all pray that everything would work out smooth as silk and that all the leaders from all over the world would be safe here.

Fifty years ago Asian unity was just an ambitious glimmer in the eyes of five Asian foreign ministers with remarkable foresight and determination.  These were Narciso Ramos of the Philippines, Adam Malik of Indonesia, Thanat Khoman of Thailand, Tun Abdul Razak of Malaysia and S. Rajaratnam of Singapore. On Aug. 9, 1967, the Asean Declaration was signed in Bangkok by the heads of state of those five countries .

Today ASEAN has become a formidable regional bloc of ten countries that includes Brunei, former war-torn Cambodia and Vietnam, and Myanmar and Laos---with a combined population exceeding 650 million. ASEAN has turned out to be a real economic and political powerhouse regional bloc,  with a combined gross domestic product in 2015 of $2.5 trillion---making it the sixth largest economy in the world and the third largest in Asia. By now, 2017, that growth doubtless has leaped even more.

Indication of its economic significance as a region is the fact that eleven leaders from East and South Asia (China, Japan and South Korea, as well as India), Europe (Russia) and North America (the US' Donald Trump and Canada's PM Justin Trudeau) are attending as dialogue partners. The Summit will also see world leaders Donald Tusk, President of the European Council and UN Secretary General Antonio Guterrez in attendance. .

Regional blocs demonstrate the old adage about strength in unity. In another part of the world, the EU bloc is demonstrating its strength in the current imbroglio between the monarchic faction in Spain and the separatist bloc in Cataluña in the northern part of that country. What appears to have thwarted the separatists’ move---at least for the moment---is the fact that the biggest nations in the EU---France, Italy and Germany, threw their collective support for Spain and Prime Minister Mariano Rajoy, not with the rebel leader Carlos Puigdemont who has since sought refuge in Belgium.

The major EU members threw their support for Spain's monarchic government after the disastrous exit of Britain (Brexit) a year ago. A new region-wide Catalan referendum toward the end of this month could be the make or break for the region.

In the ASEAN@50 Summit, confronting the ten members and their dialogue partners is the erraticism of young North Korean Premier Kim-Jong-Un who likes to tell the world that his itchy fingers are on his nuclear bombs that can obliterate New York City. Then there is the continuing dispute between China and ASEAN countries, led by the Philippines, about their claims to the vast seas all around us, which China calls the South China Sea, but which we insist on calling the West Philippine Sea.

Then there are the pesky human rights issues bedeviling so many ASEAN countries, including our own, that are related to the drug problem in the region, as well as the Rohingya ethnic minority in Myanmar that refuses to get off Nobel Laureate Aung San Suu Kyi's back. .

The host to this gigantic undertaking of ASEAN@50 is President Duterte, but behind the success of its mid-century celebration is its field marshal, no other than Ambassador Marciano “Jun” Paynor, who is calling the shots behind the scenes. Even generals and admirals as well as politicians and diplomats defer to Jun Paynor's judgment in handling the top events for the country in the next week.

Last August 2016, newly installed President Duterte appointed  Jun Paynor ambassador to the US, where he had served as Consul-General in San Francisco a few years back. But Paynor’s assumption of the ambassadorship to Washington had to be put on hold because of the ASEAN Summit---which is President Digong’s debut in international politics.  And with reason:  Paynor has been walking Philippine Presidents through their various state visits abroad since Fidel Ramos’ time, and through the presidencies of  Joseph Estrada, Gloria Macapagal Arroyo, Benigno Aquino III and now Rodrigo Duterte. IN 2015, he was head organizer of the APEC event in Manila.

The Baguio-born mild-mannered military officer-turned-diplomat was a member of the Philippine Military Academy’s Class of 1971, and for a while he was managing director of external and government relations for Ayala Corporation.  From the private sector he catapulted to the diplomatic world and became ambassador to Israel and Cyprus, with his wife Teresita and their three daughters joining him.

It was in Jerusalem during Holy Year 2000 where he saw me and my husband off at the airport as our pilgrim group was leaving for Rome to continue our pilgrimage. I entrusted my two teenage sons to his care, as they awaited their separate flight to Rome. As we were leaving Israel that time the political situation was deteriorating with the “Intifada,” but Ambassador Paynor was  securely in charge of the Filipino community.

In this most significant event for the Philippines of ASEAN 50 we pray that everything would go well and it truly helps that someone various presidents have trusted is on top of the preparations: Marciano Paynor, Jr.---ambassador par excellence. God bless you, Jun Paynor, and God bless our country and nation.

Posted by Veteran Journalist and Relentless Advocate of Truth at 12:00 AM