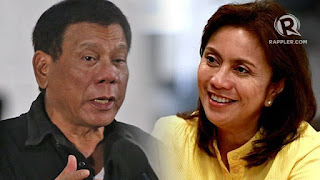 President Duterte suddenly took the wind out of the impeachment sail aimed directly against Vice President Leni Robredo by his staunch allies in Congress. Mr. Duterte suddenly was quoted today as saying that "Leni was just exercising her freedom of speech" when she criticized in a six-minute video tape submitted to the UN Commission on Narcotics Drugs in Vienna and played last March 16, his anti-illegal drug campaign that has seen more than 7,000 people dead in past months.

With this news that the VP took the anti-drugs and EJK issue to the UN, his leaders were furious.  Speaker Pantaleon Alvarez gathered House leaders to push for her impeachment, while Senate President Aquilino Pimentel III began pressuring the House leadership to send the complaint to his chamber to get the oust-Leni ball rolling.

Why, even the Department of Foreign Affairs had the temerity to lecture the second highest official of the land---never before has this happened---that "there are limits to freedom of expression," and that this right |comes with the responsibility to ensure that facts are verified, and unfounded allegations from questionable sources are avoided."

Tourism Secretary Wanda Teo reinforced administration allies as she, complained that Veep Leni’s pronouncements before the UN body “make it hard for us to sell the Philippines as a tourist destination.” Secretary Teo also pleaded with the media, “to please tone down reports on EJKs” even as she stressed during the President’s state visit to Thailand that PH is actually “a safe destination”---EXCEPT THAT JOURNALISTS ARE MAKING IT HARD TO SELL PH BECAUSE OF THEIR FOCUS ON DRUG-RELATED KILLINGS.

There are several things to point out. One is that jeopardizing the image of the Philippines did not begin with VP Leni, for almost from Day One, President Duterte has displayed the propensity to counter-attack against people who even just gently criticize him---he just cannot brook criticism. Unfortunately, every attack he leveled against foreign leaders would be assiduously reported in foreign media.

As Inquirer columnist Rina Jimenez-David pointed out the other day, “Who’s the traitor?” Said she: “If speaking out about the country’s problems and failings constitutes ‘treason,’ then the biggest traitor of all is President Duterte himself.” She pointed out that “Many times he has not been afraid to castigate foreign leaders to their face, putting our trade relations with these countries at risk..”

So why did the President retreated from the certainty of impeaching VP Leni Robredo when his House allies have the numbers? It’s good to remember that IMPEACHMENT IS ALL ABOUT NUMBERS. Thus ---though the House is fully controlled by Speaker Pantaleon Alvarez and he could get the numbers to impeach Leni, just as he got the votes to ram the death penalty through his chamber (217 pro death penalty, 54 against and one abstention in the House)--- IT'S A DIFFERENT BALLGAME ALTOGETHER IN THE 23-MEMBER SENATE. The LPs have a solid 10 votes there, so it's obvious that no matter what math is resorted to, Mr. Duterte would not get the 2/3 required vote (16 votes) in the Senate to oust Leni Robredo as Veep.

I suspect that Digong’s conciliatory move toward Leni is very much related to the second impeachment complaint being proposed in the House---this time against  himself, led by Magdalo party-list Rep. Gary Alejano. I suspect that the President’s most wary of appearing to the world as being impeached---bad for his strongman-image even if that move won’t prosper.  All the turmoil (the impeachment of the two top leaders, albeit by different parties) would also be most hazardous for the country’s image abroad.

So it had to be a QUID PRO QUO: he stops the impeachment of Leni in the House, so that he himself escapes impeachment in the Senate. MR. DUTERTE IS THE WISE GENERAL WHO RETREATS TO FIGHT ANOTHER DAY.

When Senior Associate Justice Antonio told President Duterte recently to “defend” Panatag Shoal, no one in his right mind, most especially this learned jurist, would ever think of involving Filipino troops to fight for it. They’d be killed like flies with a fly-swatter on a summer day. Justice Carpio, who has long been looking into and speaking out on the issue of Chinese incursions into PH territory--- and how the Chinese are building various structures on our ocean islands in an effort to make a more realistic nine-dash line for them--- knew of course that defending the Shoal cannot mean doing it with our troops.

The fight has to be carried out ON THE WORLD STAGE. AND IN THE ARENA OF INTERNATIONAL OPINION: PH has to bring this issue to various international forums where its claim has been upheld and seek to get allies to support our stand. Mr. Duterte knows this only too well but perhaps he’s just being stubborn. Neither would it help to hold him to his promise during the presidential campaign: that once-elected he’ll jet-ski to Panatag Shoal and plant the Philippine flag there.

The jet-ski bit was Duterte hyperbole at its most colorful, but it clicked with the Filipino voters who gave him an unprecedented 16 million votes to capture Malacanang.  But now that he’s President, Mr. Duterte can no longer hyperbole his way to our China problem’s resolution. He has to build up a consensus among Asian claimants to these China Sea waters and get their support for our cause, as it might someday be theirs too.

First, there is the UN-backed Permanent Court of Arbitration in The Hague, where the Philippine claim to the contested islands in what’s called the "West Philippine Sea" was upheld last year. The logic of the UN Arbitral Court decision is simple: The Panatag Shoal is only 124 nautical miles from our nearest shore in Zambales, whereas it's easily over 250 nautical miles from Beijing. Moreover, these seas have been the traditional fishing grounds of our people since the dawn of civilization.

Let’s build a consensus while PH heads ASEAN this year. Various countries in this regional grouping---e.g. Vietnam, Cambodia, Malaysia and Myanmar--- have claims as well to some of the islets in the vast ocean around us. PH should try to win them over vs. the big neighborhood bully up north. And perhaps there is more sympathy than we think.

Posted by Veteran Journalist and Relentless Advocate of Truth at 4:53 PM