Retired lady jurist takes deep breath when queried about extra-judicial killings, realistically fearing clogging of courts if all rights cases are filed. Rabid Dutertista frantic to coax President Digong to shut up for a while and ponder instead on his remarks that continue to rile up international community. Problem: would media be mature enough to relegate his colorful quotable quotes to inside pages? 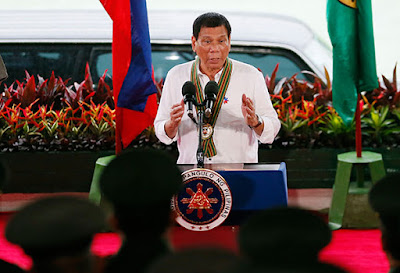 Last week I was at the wake for veteran newsman Vet Vitug, husband of my journalist-friend Marites Danguilan-Vitug and who had succumbed after being in coma for five months. I spotted a retired lady jurist in the crowd and pulling her to sit down with me, I posited to her the query on everyone’s mind: can the President’s all-out war vs. drugs be conducted without violating human rights of victims or resorting to what critics term “extra-judicial killings?”

The retired jurist took a deep breath, obviously encountering this question many times over. She admitted that “It’s really very difficult” as cases filed in court would pile up, owing to the astounding number of people involved with drugs.  But aside from the clogging of court dockets, there’s the poverty angle, the sense of alienation from society of drug users, both among the very poor and the very rich, etc.

“A tough balancing act,” was all she could say. I felt somewhat relieved at her admission, as it shows the human side of this mind-boggling problem facing our country---no easy way out at all.

A lady friend, a rabid Dutertista, sent the following text message two days ago: “Friends, this is getting worrisome, to say the least. What a scare looking at the morning news today. What is President Duterte trying to do with his careless remarks that are creating more enemies instead of allies?” My friend seems to have thrown up her hands as she texted further, “How do we reach him? How do we tell him to be more careful?  As much as we want to help him succeed, he is embarrassing us all---our country is in peril. The international community is up in arms with his careless rhetoric. Please let us help him shut up with his careless machismo tirades. ASAP pls---his men cannot continue defending him every time.”

This lady cites, for instance, among Mr. Duterte’s most avid “explainers” especially to foreign governments Foreign Secretary Perfecto Yasay, who, she feared, might just get fed up and give up!  She followed this up with a frantic appeal: “Please, please, let us senior citizens gather together and speak to the President.  For the first time we have a strong decisive President, but he needs to be guided; please let us seek an audience with our President. This cannot go on! Let's seek a dialog with him.”

I think the sentiment my friend, who’s normally calm and un-rattled, aired is a growing feeling: Let’s call on the President to just be quiet for a while to gather his wits and assess the situation all around.  Sen. Dick Gordon echoed this same sentiment when he advised Mr. Duterte, as headlined in Manila Standard yesterday, “To Shut Up Already” on his claim that he will kill drug dealers and pushers.  In fact, Gordon, who was once in the Mayors' League with Davao Mayor Duterte, was quoted as saying he’ll suggest that “we change our tourism slogan from ‘Wow Philippines’ to ‘Wow PI (for Wow Pu---ina!),” the President's favorite expletive.

Gordon added that Mr. Duterte’s “repeated endorsement of the killing of drug suspects if they resist arrest leads to the misconception that he sanctions the use of unnecessary violence.” He continued, “He stumbled on his own sword because he was talking and talking, so that now the whole country is being accused of allowing such things to happen.”

The cause celebre of the “mouth that roared too much” came to its height when the President was quoted in Davao as saying that he'd be “happy to slaughter three-million drug users,” just like Hitler who exterminated six million Jews. That ghastly remark went viral internationally as the pits and understandably aroused the livid ire of Jewish organizations the world over--- especially in America which has a very large Zionist movement that controls the lion's share of US wealth. The uproar forced Mr. Duterte to apologize to the local Jewish community and the world.

A US defense department official, in fact, was quoted as likening Mr. Duterte’s propensity to put his foot in his mouth to that of Republican presidential candidate Donald Trump who likes to invoke notoriety to get the attention of the American public in the campaign hustings. The US official opined that just as the best way for the American media to treat Trump’s outrageous remarks is to ignore them, it would also be good for local media to ignore Mr. Duterte’s outbursts especially against the US, for after all, this official reasoned, the affinity of the Filipino people to their former colonizer remains solid.

There’s sensible basis to insist that Mr. Duterte’s fiery outbursts ---such as his most recent tirade advising President Obama to go to hell and officials of the European Union’s Parliament to try purgatory---be ignored rather than treated as screaming front-page headlines to be feasted upon by foreign media. There is obviously something in the psyche of the President that relishes his enormous preference for shock-and-awe remarks as he observes his first 100 days in office.

Perhaps as he gets used to the pomp and circumstance of his exalted office, he’ll be more sober and circumspect about his pronouncements and begin to sound PRESIDENTIAL. That's a big iffy, however, for as Mr. Duterte argues, 16 million Filipinos voted for him, coarse tongue and all. The problem, however, is, would media by and large be MATURE ENOUGH to relegate his fiery outbursts to the back burner where they could just simmer quietly, and put more sober analytical stories on the front burner instead?

These times are trying for both Mr. Duterte, the media and the Filipino public.

The same is true for both chambers of Congress. After the circus hearings in the Senate and the House---where female senators and representatives of various political persuasions had to band together in order to prevent the slut-shaming of Sen. Leila de Lima in alleged sex videos, and the latter had to stage a walk-out in the Senate in protest of what she claims to be mangled evidence in the Senate---it's time to gather all the documents and turn them over to the public prosecutor, preparatory to the filing of cases against her in court.

To be sure, court proceedings won't be as colorful as the hearings in both chambers; but it’s time we terminate those scandalous hearings which are in reality just continuing politically-motivated jousts between the old LP and the current administration’s allies.

Moreover, there are so many problems that persist despite all the fireworks in both chambers of Congress and in the presidency---the hideous traffic in Metro Manila that’s demanding kuno emergency powers from some quarters before it could be solved (thank God Sen. Grace Poe is rightly skeptical of this plea); cutting the drug problem at its very source, the horrible state of our prisons, deepening poverty (26 million Filipinos go to bed hungry at night), etc. All these are not being given enough attention by Congress.

Let’s stay focused on those problems that truly affect our people.
Posted by Veteran Journalist and Relentless Advocate of Truth at 10:46 PM