"We have to listen twice as much as we speak" ---message of Davao Archbishop Emeritus Fernando Capalla to old friend Digong Duterte, whose mother, Soledad, had once besought him: "Monsignor, help my son become a religious leader." Capalla pines for Digong who used to do "Bisita Obispo" every Holy Thursday. Current Archbishop Romulo Valles strong contender for CBCP prexy in July 2017, which may alter his current off-issues stance. 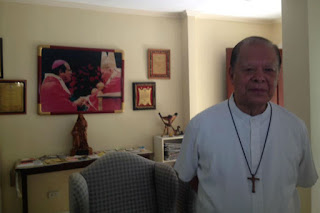 Davao Archbishop Emeritus Fernando Capalla misses old friend Digong Duterte, whom his mother, Mrs. Soledad Duterte, had entrusted to his care soon after the Archbishop was installed on Nov. 28, 1996---20 years ago. In a recent conversation with this blogger, Capalla recalled the visit of Ms. Duterte where she told him, "Monsignor, can I ask you a favor? Can you help my son become a religious leader?"

Apparently the then Mayor's mother had worried about the slew of killings in the southern city.

Capalla stressed that Digong loved his mother very much and that "He would never contradict her." But now the old lady is gone and access to the President, once his good friend, has become very limited.

Archbishop Capalla has reason to pine for old times. He recalled to me with a laugh how, every Holy Thursday, while the faithful would flock to the churches for the "Bisita Iglesia," Mayor Digong would instead come to see him at the Archbishop's Palace for a "Bisita Obispo," where they would chat about anything at all.

At that time the Mayor would tell him, "When you speak as Bishop of Davao, I respect you." In fact, he would stress that "We should always remain as friends."

Now there is a yawning gap between them. Capalla recalls that the Digong he knew “was a very, very humble and respectful person .. I know he would really respect his mother and the church pero karon what he says about the church, (it’s) as if he does not know what it is all about.”"

Reading the MindaNews write-up on his sentiments, I called up Archbishop Capalla at his Davao residence, where he admitted that "“I am worried about Digong as a friend.”  Capalla, who turns 82 next month, opined that “I think (Digong) has a problem and we need to help him."

He has asserted that his old friend is "in the course of self-destruction, without even knowing that he is ruining himself. I don’t know that he knows that, but because he is already there, we need to help him." How? "That’s a big question."

Capalla's successor, Archbishop Romulo Valles, and his prelates are quiet on the raging issues about the new President, and the only voice heard is that of the retired Archbishop who strongly feels that "the Church cannot be stopped from preaching about morals."

But Archbishop Valles might not be able to sustain his seemingly detached stance. Currently also the CBCP vice-president, he stands a big chance to be elected the next CBCP President for a two -year renewable term, after current President Socrates Villegas, Archbishop of Dagupan-Lingayen, bows out in July 2017. Should he be elected then, Archbishop Valles may be thrust into a position where his current silence about criticisms of Duterte may not be tenable.

In 2001 the Church in Davao under Capalla's leadership issued a pastoral letter titled "Thou Shalt Not Kill," which criticized the dreaded Davao Death Squad associated in the popular thinking with Mayor Duterte (it resurfaced as the "Prayer for Healing" in 2009 in the Manila Times). All the churches in Davao at that time bannered huge streamers in their facades vs. the killings, but now it seems that every one in the church hierarchy is quiet---except the Archbishop Emeritus.

Capalla acknowledges that Duterte “really loves the people,” especially the poor. He said the people he's helping “are also suffering but they don’t mind. What they want is for him to listen to them so they could be helped. Sayang imong gibuhat na di nato malahutay (It would be a pity if what you’re doing can’t be sustained)."

As quoted by MindaNews, Capalla wishes to tell the President, "Listen. Listen. Listen. Digong, ang Ginoo naghatag kanatog duha ka dalunggan, usa ra baba (Digong, God gave us two ears and only one mouth)." Which means that we have "to listen twice as much as we speak.”

He continues: “The ears are important. But we should listen not only with our two ears but with the third ear OR THE HEART. Mao na akong message sa iya pero (That is my message to him but) will he accept that? Will he listen to that?”

“Listening is very, very important, even in a dialogue,” Capalla asserts, even though he cites the counsel of former President Joseph Estrada that "few words, few mistakes; no word, no mistake.” I cannot agree more: the virtue of meditation combines ardent speaking and patient listening.

Capalla laments, however, that “It’s the reverse now. That’s why we are in trouble,” referring to Mr. Duterte’s expletive-laden broadsides and “I will kill you” pronouncements. His old friend, asserts the prelate, is making "colossal blunders."

“If he can only listen… listen to other people,” and not talk too much, earn friends instead of enemies, Duterte can become the “greatest President of the Philippines,” Capalla told MindaNews.

Archbishop Capalla said his sentiment is shared by other friends of Duterte, but access to him has become limited since he won the presidency. Capalla had hoped he could talk with him last September 19 at the Bishops-Ulama Conference general assembly at Mergrande Ocean Resort, but while he confirmed attendance he didn’t show up.

Archbishop Capalla, though retired, remains much sought -after as speaker. On Oct. 26 he travels to Laos for the "Global Forum on Moderation (Peace) where he will speak on his experience 20 years ago as co-founder of the Bishop-Ulama Conference with Dr. Mahid Motilan, the only Filipino with a doctorate degree in Islamic Theology from Cairo University in Egypt.

This Nov. 17-19, Capalla will travel to Colombo, Sri Lanka, with Presidential Peace Adviser Jess Dureza at the invitation of the Sri Lankan government for a conference among Asean countries on Islam---with the aim of reviving the values of Islam.

Interestingly, retirement has not allowed this brilliant theologian and ex-primate of Davao City to retire, but his one big aim---to dialog and rekindle his friendship with his old friend Digong Duterte---seems still unattainable.
Posted by Veteran Journalist and Relentless Advocate of Truth at 12:11 PM