US President Obama assures continuing close US-PH relations even as US State Dept. cancels his meeting with Duterte. Our President is most sought-after leader in ASEAN summit, but this is largely owing to notoriety in his speech which has tremendous repercussions on world stage. Citizens' query: is "lawless violence" proclamation "creeping martial law?" 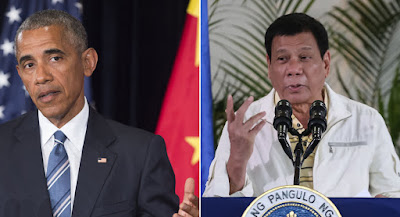 Listening to last night’s evening news, I felt uncomfortable about the way US President Barack Obama was assuring world and ASEAN leaders assembled in Laos how his country would guarantee free and untramelled passage through the China Sea, in accordance with international law, especially after the recent arbitral committee decision in The Hague upheld the Philippines’ claim against China in the West Philippine Sea.

Obama also stressed to the world how strong US and PH alliance remains, even as there was Russian President Vladimir Putin defending China’s claim to the same sea waters---clearly remaining the staunchest ally of China.

And yet the US President’s unequivocal defense of its traditional ally took place even as the US State Department cancelled a scheduled meeting between him and President Rodrigo Duterte on account of the latter’s curse-remark. Mr. Duterte's ire was provoked by the State Department's pointed reminders to him in recent weeks about the need to uphold human rights  and prevent what it considered the mounting extra-judicial killings in his campaign against illegal drugs.

It was embarrassing for a Filipino like me to listen to Obama's forever-friends reassurance, inasmuch as days before, Mr. Duterte had lambasted him in his typical colorful invectives reserved for perceived adversaries---which by now the world has grown accustomed to.

Finally the axe fell. Mr. Obama sounded quite hurt in his press conference following Mr. Duterte's threat to shame and confront him at the ASEAN summit and the one-on-one between the two supposedly staunch allies was cancelled. Yet there was the outgoing US President still proclaiming to the world the continuing strength of the two countries' historic alliance and that aid in various forms would continue. Surreal indeed.

Mr. Duterte sounded sorry the next day for the mess he had created in the ASEAN meet and his Cabinet officials are now tripping all over to do damage control. Labor Secretary Bebot Bello made light of the meeting's cancellation by saying that after all, Mr. Obama is already a “lame duck President.” Really now, Bebot Bello---defense ba yan!

On the other hand, some of those who had strongly supported Mr. Duterte’s uncompromising stand on many issues now feel obliged to remind him that his utterances on the global stage carry enormous repercussions and that he should be more studious about them. One of them is Fr. Rannie Aquino who now invokes that the President take the statesmanlike approach. I hope he listens to Fr. Rannie, although those who know him well doubt whether he would change tactics. After all, they argue, he won 16 million votes precisely because of his colorful language.

I can imagine how tough it must be for Foreign Secretary Perfecto Yasay Jr., who has to deal with his counterparts from around the world about all the PR fiasco of his boss. But thank God that Jun Yasay is a veteran lawyer who had maintained a successful practice in the US in the martial law years. On the other hand, the colorful Presidential Legal Adviser Sal Panelo can keep the ship of state afloat with his typical bluster.

At the interview weeks back that Cecile Alvarez and I conducted with Secretary Jun Yasay over our regular Sunday 6pm. dzRH program, he defended the Duterte administration from the accusation by his predecessor, former Foreign Secretary Albert del Rosario, and former Ambassador to Washington Joey Cuisia, that this administration took such a limp stand over our claim to the West Philippine Sea during the Asean gathering in Kunming, China.

Secretary Yasay admitted that the initial order of President Duterte after PH's victory in The Hague was "to go easy and not to rub it in” to the defeated Chinese. But he also stressed that in a subsequent gathering of nations in Laos, the Philippines took a hard-line position toward our claim and that the US and Japan joined other Asian nations in recognizing that UNCLOS-supported Hague decision. Hence, argued Yasay, the earlier tactic of going easy with our Hague victory won friends, thus proving superior.

Yasay lamented that his critics "were not there and they did not know the dynamics among the participants." I can see his point. There are always several sides in an issue. Besides, it was rather poor taste for Del Rosario and Cuisia to air criticisms of their foreign service colleague in public---at a time when developments called for unity among Filipinos.

The recent decision of President Duterte to place the entire country under a proclamation of "an existing state of lawless violence” may have reasons the public may not fully comprehend, but it has placed our people in a new spate of nervous tension while hogging headlines anew in international media. Fear is being expressed in various quarters as to whether this proclamation (now just newly named Proclamation No. 55)---coming after the terrible blast in Davao City, heartland of the President, just days earlier that left 15 people dead and 70 wounded---is “CREEPING MARTIAL LAW.”

Many Filipinos who recall the Marcos martial law years doubtless remain allergic to the idea of a new imposition and they acted quick and strong toward the "lawless violence" proclamation. The Integrated Bar of the Philippines stressed that in the light of this proclamation, the President's power under Art. VII, Sec. 18 of the Constitution limits his act “to summoning the armed forces” under his constitutionally established “calling out power.”

This is the power to call on the AFP to “prevent or suppress lawless violence, invasion or rebellion,” but that in so doing, civil rights and liberties have to be respected. The same Art. VII, Sec. 18 in fact, sought to protect these civil liberties in such invasion or rebellion, by requiring the President to report in person or in writing to Congress within 48 hours on the suspension of the privilege of the writ of habeas corpus;  a revocation of such proclamation or suspension by Congress may not be set aside by the President.

The IBP reminded him that any act beyond this “calling out power” to the AFP  and its concomitant consequences “shall be considered illegal or ultra vires.”

But do such conditions of lawless violence, invasion or rebellion exist on a nationwide basis to warrant calling out the AFP? This remains the question on many minds.

Once again---nothing new in the very young Duterte administration---there is the familiar tough balancing act demanded of the Chief Executive, as various citizens rap him for over-acting and exaggerating the bombing crisis in Davao. Part of the tension, however, came from the Malacanang Press Office, for at first it stressed that the proclamation of “lawless violence” would be limited only to the Davao area; but just hours later, Presidential Spokesperson Ernesto Abella said it would cover the entire nation.

But in what was clearly an after-thought---rather than attach fresh importance to the bandit Abu Sayaf that acknowledged the bombing as its handiwork---the Palace later stressed that the root of this “lawless violence” proclamation may be found in the war against illegal drugs and the fact that extra-judicial killings have been resorted to by enemies of state.

What's causing a lot of anxiety among various leaders obviously was the fact that the basis for such proclamation was not adequately explained. Mr. Duterte stressed that it was not “martial law” but that “I’m inviting now the Armed Forces of the Philippines, the military and the police to run the country in accordance with my specifications.” But just what are those specs were not readily laid out.  Would the call-out to the AFP result in abuses?

From my talk with various citizens, I believe the President has the support of majority of Filipinos in his campaign vs. illegal drugs, but his proclamation of lawless violence rakes up a lot of nervous tension about the past. The experience of citizens in the earlier martial rule of President Marcos beginning in 1972 showed that there were numerous violations against human rights then--- so much so that they now invoke those same violations in protesting Mr. Duterte's intention to bury Mr. Marcos in the Libingan ng Mga Bayani.

Mr. Duterte must be well aware of the citizens' grave distaste for abuses in the Marcos martial law era; thus It's reassuring to hear him stress that there will be no suspension of the writ of habeas corpus or warrantless arrests or even curfews during the period of the state of lawless violence. But as Sen. Ralph Recto insists, the Chief Executive still has to issue a written order that “will prescribe the specifics and limits of (his) proclamation placing the whole country under a state of lawlessness,” so that in turn, citizens would know just what activities would be permitted or prohibited, if any,  during this period."

I cannot agree more. There is something about martial law that sends chills up and down citizens’ spine. This may sound odd for an ex-military wife to say, but I remember vividly how it was in 1972, when Mr. Marcos imposed martial law. My husband, then on leave from the Defense Department, was on schooling in UP; thus, when martial law was declared I had to be the one to hear it over radio and tell him that morning. I remember how I felt like a thousand thunderclaps hit me, but my husband took it calmly though I’m sure he felt most anxious too.

Posted by Veteran Journalist and Relentless Advocate of Truth at 10:22 AM