Shameless politicking in the Senate even as world economy faces possible banking crisis with China’s external debt of US$28 trillion. Recent peace talks in Oslo were so friendly---truly Pinoy-style---that third-party facilitator asked, “Are you really at war with one another?” Even the Norwegian Foreign Minister ate with his hands boodle-fight style. Can we seniors engage Mr. Duterte in much-needed dialogue? 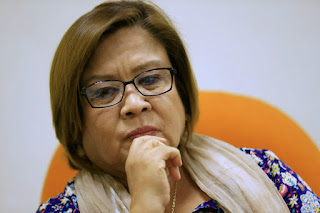 Can their Excellencies, whose salaries are paid by us tax-payers, concentrate, for example, on how China’s huge financial crisis---its outstanding external debt of US$28 TRILLION is as much as the commercial banking system of the US and Japan combined--could impact on the world economy, and more specifically, on the small and fragile Philippine economy? Recall that adage: "When China sneezes, PH catches pneumonia."

Is anybody minding the store?

The other day Senate justice and human rights committee chair Leila de Lima hurled all the dirt she could muster against President Duterte by presenting witness Edgar Matobato, who sought to link him allegedly with the infamous Davao Death Squad that was said to have eliminated about 1,000 people on orders of the then Davao Mayor.

The past days witnessed the heated uncivil exchanges between two senators who were, ironically enough, united before the November elections in a year of undisguised political persecution of then VP Jojo Binay: Antonio Trillanes and Alan Peter Cayetano (then Senator, now that chamber's president, Aquilino Pimentel III, completed the anti-Binay triumvirate then).

This time Trillanes backed up De Lima’s star witness vs. Duterte, while Cayetano stoutly defended the President. Senate President Pimentel, another staunch Duterte ally, refused to give protective custody to Matobato, which runs smack against the chamber's practice, forcing Trillanes to take charge of that problem.

This afternoon the Senate majority retaliated against De Lima, with Sen. Manny Pacquiao---who should have stayed in the boxing ring instead of straying into the Senate circus ring---moving to declare her committee post vacant. Fifteen other senators backed up his motion and installed Sen. Richard Gordon in De Lima's place.

There’s just too much politicking---each side eager to protect the dirt accumulated in its yard, in a manner befitting thugs and hoodlums. How times have changed, as once-revered institutions have deteriorated.

I recall how my elder brothers would narrate to me how they and their classmates would travel all the way from the Ateneo de Manila in Loyola Heights to the Senate, then located along Taft Avenue, just to sit in the galleries for hours on end and listen to the great debates among senators. Names like Claro M. Recto, Lorenzo Tanada,  Arturo Tolentino, Emmanuel Pelaez, Jovito Salonga, Lorenzo Sumulong and the Laurels and their ilk used to liven up the Senate plenary hall with their vigorous verbal jousts---carried with such lofty tone, elegant language and solid substance befitting worthy parliamentarians.

In the course of research on topics such as the Sabah issue, I also had to go through Senate records and I noted the debates between Senators Sumulong and Salonga, and how celestial their language was. Today a total lack of civility prevails among the senators as the order of the day is crude, undisguised politicking.

It’s a sign of the times indeed, what essayist Joseph Wood Crutch termed the “Age of the Common Man”---except that the latter has become ALL TOO COMMON in our Senate and we Filipinos are the poorer for it.

If I may borrow again, this time the late great Martin Luther’s phrase, “I HAVE A DREAM.”

I dream that one day soon, President Rodrigo Duterte would allow a group of us senior citizens to meet with him at the Bahay Pangarap and dialogue with him on the state of our country and the way he is responding to our problems on the national and international stage. It would be great for Mr. Duterte  to listen, not to the fawning sycophants who need jobs or projects from him and therefore are singing hosannas to him all day long, but to us seniors whose only concern is the country we have served for decades---and how our President’s sizzling pronouncements are being quoted and interpreted in various major news outlets around the world---mostly plastering a black eye on his administration.

I get a lot of the world’s headlines daily and right now Mr. Duterte is the undisputed enfant terrible of the planet. It’s good for his ego to be incessantly talked about by the leading presses of the world, but I lament that so much of his political capital and good will abroad is being needlessly dissipated in what seems the lack of cautious study of his pronouncements and close coordination with his advisers---some of whom may be too afraid to speak up for fear of losing their jobs.

What’s good about us seniors is that we don’t need jobs or favors from Mr. Duterte; we are only interested in helping him win the war against illegal drugs, criminality and terrorist groups, etc., while respecting human rights in the process.  His success in solving these huge problems will impact on the future of our grandchildren, about whom we care so much.

How about it, Mr. Duterte?  We’ll share with you our wit as well as our hard-earned wisdom of the ages, while you explain your side on the burning issues of the day over tea and Davao delicacies. We’ll both talk and listen---fun and work.

The image of the Duterte administration is one of disarray and his Cabinet members are having a tough time straightening out distortions on his pronouncements.

Foreign Secretary Perfecto Yasay, for instance, did a yeoman’s job at the recent ASEAN Summit in Laos, as he sought to do damage control after Mr. Duterte bandied around photos at the formal dinner, which showed mass slaying of the Moro people by colonizing American forces at the turn of the century (Yasay later had to fly to the US to tackle the State Department). Mr. Duterte sought to use those photos to counter US criticism of the extra-judicial killings in the current anti-illegal drugs war, but it’s easy to see that standards of morality have changed since the colonial period and what passed muster in one era cannot apply to the current, hopefully more enlightened time.

Unfortunately, the disarray in the administration hurts economic prospects and dissipates respect for our leader abroad.

Speaking  of fun and work, Ramon Magsaysay Awardee for Theater Cecile Alvarez and I had both fun and work at our “Radyo Balintataw” over dzRH last Sunday, with a phone patch with Labor Secretary Silvestre “Bebot” Bello from out of town. He  was one of several Cabinet members led by Presidential Adviser on the Peace Process Jess Dureza, who journeyed to Oslo, Norway last month for history-making five days of peace talks with the Left, led by Luis Jalandoni and Jose Maria Sison.  Tackling the Oslo peace talks was appropriate for our dzRH show as this Wednesday, Sept. 21, is the UN-declared “International Day of Peace.”

As we now know, an “indefinite, unilateral ceasefire” on the side of the Left resulted in a joint declaration of ceasefire with government---the first time in 12 years this was achieved. Failure to declare it earlier is said to have stemmed from fear of some leftist elements that "ceasefire" would be read as “capitulation.” The second round of the Oslo talks resumes Oct. 6-10.

But more than the ceasefire declaration that was adequately carried in news outlets, we asked Bebot Bello to “make kwento” behind-the-scenes stories in that Oslo gathering.  He recalled that the sessions would open with prayers (did the Communists join in prayer? Fantastic if yes). He also admitted that at times a walk-out seemed imminent but it never materialized, drowned out by the friendly camaraderie and what looked like so much fun among the conferees---so much so that third-party facilitator Elizabeth Stratum asked at one point, “Are you people really at war?”

In fact, at the conferees’ last night in Oslo, there was even a boodle fight (in military parlance, this is a feast in camps spread out over banana leaves, where everyone eats standing and with his hands).  Bello recalled that even the Norwegian Foreign Minister took to eating with his hands. If nothing else, His Excellency would remember that effort forever.

The success of the Oslo talks---let’s pray for Round Two---would impact greatly on the economy as for instance, revolutionary tax imposed by the Communist Left in the countryside should disappear in a permanent and lasting ceasefire. I asked Secretary Bello to convey my best wishes to my UP classmates, Joma Sison and his wife, the former Julie de Lima, and urge them to return to the homeland and work with all of us at nation-building, before Joma loses his hair altogether.

Posted by Veteran Journalist and Relentless Advocate of Truth at 12:07 AM