Nervousness about Rodrigo Duterte palpable even as his inaugural is just a month away, due to his recent attack on bishops/Church and statements that seem off-the-cuff rather than well-thought out. New Press Secretary/spokesperson Sal Panelo seeks to allay public apprehension by stressing that these statements could be “pang kampanya lang.” Duterte contemplates simple inaugural at Malacanang with only pika-pika fare. Even as House reps rally to battle-cry, "Change is coming," faint whispers in half-jest also admonish that "Abolition is coming." 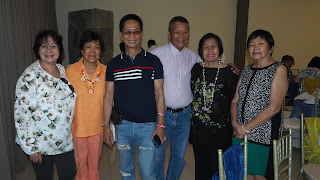 Recently I was having a blow-dry at my favorite beauty parlor when a lady friend wailed into my cellphone, “Bel, ano ba ito? Why is the new President frightening all of us?” She then rattled off the “offer” made public by presumptive President-elect Rodrigo Duterte of four mass-based Cabinet posts to the Left.

Amid the whirring of the hair-dryer I could barely hear my friend as she cited headlines about Duterte’s intention to bring back the death penalty, abolished since 2007, and she was plainly hysterical as she noted how he advocated death by hanging, describing vividly how the head would snap from the body!  She also noted that Duterte said he'd give law-enforcers permission to shoot-to-kill lawless elements, prompting human rights advocates here and around the world to discombobulate.

“Ano ba ito? Dios ko!  my lady friend wailed. I agreed with her and we spoke about how even the usually mild-mannered come-backing Cebu Mayor Tommy Osmena seems to afflicted with the same sickness as the President-elect. Osmena raised eyebrows when he was recently quoted as offering to pay his police force a bounty of P50,000 for every criminal they kill, and P5,000 for every criminal they wound.

The Cebu mayor was quoted as saying that he would not suppress vigilantes, but my wailing lady friend and I agreed that vigilante-style executions are not the answer to criminality.  Instead it lies in strengthening the justice system where palakasan is reduced through the appointment of dedicated public servants in the judiciary, and properly equipping and motivating the police and security forces.
I sought to comfort my hysterical friend, opining that the President-elect should  have signified mere intention to submit these moves to exhaustive study and consultation first, rather than sounding so definitive about imposing them. There’s a whole world of difference between rushing headlong to implement a move and first subjecting it to study and deliberation---the way there is a difference between being a demagogue and being a statesman.

I realize that those initial pronouncements were made to shock and awe, in true Duterte fashion, and that they caught on with the broad masses during the campaign--- garnering him the biggest plurality of 17 million votes, over 6 million more than his closest rival, LP’s Mar Roxas. Duterte must be reminded, however, that he is now the President-in-waiting and in a little more than a month he will be sworn in to rule over our country, God-permitting, for the next six years. Unfortunately Rody Duterte has not let up on the shock and awe tactic.

Today’s headlines screamed about how he hit the Catholic Church as “the most hypocritical institution” in the vilest language. He also brushed aside complaints from his long-time friend and patron, 64-year old Pastor Apollo Quiboloy---one of his biggest financiers, who lent him use of his private jet and other assets in his campaign---about his being shut out from negotiations regarding Duterte’s appointments. In this connection, however, perhaps it's timely to remind the good sect-leader that his kingdom-building ought to be geared toward the spiritual world.

Adding to the general unease is the oft-repeated threat of the incoming President that if he encounters an obstinate Congress, he would abolish it.

The nervousness of much of the population is evident, even as a sizable part of them is applauding loudly his seeming decisiveness and forcefulness, in stark contrast to the frightfully limp image of outgoing President Aquino. I had occasion last Saturday afternoon to air this sentiment on behalf of all those nervous about Digong to his new Press Secretary and Spokesperson, UP-trained lawyer Salvador Panelo, whom Cecile Guidote Alvarez and I were able to hijack for a 20-minute interview for her Sunday 6 pm. program, “Radyo Balintataw,” over dzRH.

Witty and quite approachable, and dressed in what he said would be de riguer attire in the Duterte administration (T-shirt and denim pants with cuts that expose the fabric's threads), Sal Panelo sought to calm public apprehension about his incoming boss’ remarks on vigilante justice---even as I noted that US President Barack, in his five-minute congratulatory call to the President-elect, sought to remind him about human rights. Panelo, whose wife is a famous endocrinologist, stressed that after all, Duterte is a lawyer and knows the limits of the law; he opined that doubtless those remarks were “pang-kampanya lang” and that Obama’s admonition “should be taken in context.”

Panelo also revealed that the incoming President is leaning toward a very simple inaugural at Malacanang Palace, not at the Luneta, with just pika-pika instead of a full-course banquet. This is laudable.

The incoming Press Secretary---who will have his own battle with the Commission on Appointments over his involvement as lawyer of the Ampatuan family during the investigation into the infamous massacre that ended in many media people slain--- narrated that he had been egging the Davao mayor to run for president as early as seven years ago. Panelo cited his incoming boss' opinion that only he can truly articulate Duterte's mind. If this is so, I expressed the hope that he as presidential spokesperson could help rein in his boss' often outlandish statements and subject them to intensive study and deliberation first---in other words, that Duterte can act more like a statesman than a campaigning politico.

Inside the House of Representatives, politicians from the 40-year old NUP, the NP and the NPC are now busy positioning themselves vis-à-vis the new administration and a new leader in the chamber---in the hope of getting juicy committee chairmanships.  Duterte’s anointed candidate for Speaker is Davao del Norte Rep. Pantaleon “Bebot” Alvarez and as expected, there'll be a lot of shifting of party loyalty to support him. First to jump ship are some 80 out of the 116 LPs elected, who have opted to join Alvarez's “Coalition for Change” with the empirical blessing of outgoing Speaker Sonny Belmonte, soon to become the Minority Leader. Leading the pack of turncoats is the Visayan bloc led by Rep. Albee Benitez which originally went for Grace Poe. The Panay bloc originally supported VP Jejomar Binay but is now also supporting Alvarez.

The NPC, which earlier backed up Grace Poe, has now allied with PDP-Laban, whose chair is Duterte himself.

And so the House politicians once again demonstrate that politics is essentially the survival of the fittest. But even as there is jockeying for posts amid the battle-cry, “Change is coming,” there are also faint whispers in the corridors of power that say in half-jest, “Abolition is coming!”
Posted by Veteran Journalist and Relentless Advocate of Truth at 5:06 PM