It seems SC would be tackling Poe issues in several more sessions, but Comelec would have problems with her name on ballot if she were DQed (a high probability despite some justices openly lawyering for her). More complications: Smartmatic's source codes have to be pulled out from BSP vault due to "glitches." Citizen groups demand, in addition to restoring PCOS safeguards, providing voters with receipts that would tell them whom they voted for, not just the "congrats." message in past elections. But why is League of Municipalities objecting to this? 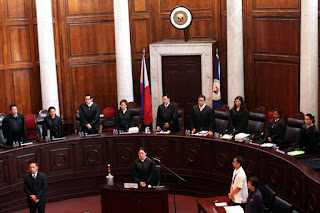 With the official campaign period for the May 09 elections kicking off last Tuesday, the status of oral arguments on the Comelec's disqualification  (DQ) case vs. Grace Poe on-going in the Supreme Court is only one of the several factors that are contributing to citizens’ deepening apprehensions about clean, honest and orderly elections. The SC hearings on Sen. Poe’s DQ case promise to take easily two or three more weeks, but Comelec can no longer postpone printing of ballots beyond this Monday, Feb. 15---which means the likelihood of including Poe's name in the ballots is a given.

Now, since Poe has emerged on top in several surveys, there’s understandable and grave concern that should she be DQed in the end, discarding votes in her favor as stray ballots could create enormous political instability.

What's interesting, however, is that SC justices openly for her, such as Chief Justice Ma. Lourdes Sereno and Associate Justices Marvic Leonen and Francis Jardeleza, all Aquino appointees, have hogged the previous four sessions of the High Court, their interpellations running over three hours each---as though there's no urgency to resolve Poe’s candidacy and her inclusion or exclusion from the ballots.

This has led to speculation in media and political circles that President Aquino is now playing the Grace Poe card, in view of the low standing of his anointed, Mar Roxas, in the presidential race. Another angle being advanced by pundits is that Poe's candidacy helps split the votes for Binay, thus widening the field for Mar. These speculations have become grist even for some US-based Filipino media outlets.

Add to the Poe issues before the SC the problems currently bugging Smartmatic (which has always had problems ever since government contracted its voting machines for the 2010 elections, the 2013 and now the 2016 elections)---thus seriously putting into question (again!) the viability of the May 09 elections. Credit Comelec and Smartmatic for incredible timing, but on the very eve of last Tuesday's campaign period kick-off, Comelec announced that it’s "modifying" the source codes for components of the AES to be used in the coming elections, because, as the Daily Tribune put it, glitches have caused "incompatibilities" in them!

The source code is the command order for the machines, and the codes for both the consolidated canvassing machines and the election management system were deposited in the vault of the Bangko Sentral ng Pilipinas two weeks ago. But because of the glitches, these codes would have to be pulled out and voided---and a new modified source code would be deposited in BSP anew.

But how reliable would this "modification" be, given the time constraint? Doesn't this predicament conjure fearful memories of those 76,000 CF cards that had to be ostensibly pulled out from precincts all around the country and reconfigured a few days before the 2010 elections?

Moreover, concerned citizens led by former Biliran Rep. Glenn Chong (who lost in 2010 owing to PCOS machinations in his province) and multi-faith leaders such as senatorial candidate Greco Belgica are strongly pressing for the return of necessary safeguards in the PCOS machines that were discarded in the 2010 and 2013 elections. Among these safeguards are the use of UV lamps to determine authenticity of ballots inserted into the PCOS machines, the source code, the digital signatures of the board of election inspectors in order to pinpoint responsibility for any hocus pocus in the precincts (as they say, you can jail colluding BEI inspectors, not the machines).

But just as important, Glenn Chong and our IT experts also demand that voters be issued by the voting machines their voter’s receipts (called the "voter verified paper audit trail," or VVPAT) that would indicate whom they really voted for---unlike in previous elections when all the machines said was "congratulations."  If there is discrepancy in the receipts, voters can complain to the election inspectors; moreover, these receipts can be deposited in a box inside the precinct for counter-tallying as well as to prevent voters from selling them to unscrupulous parties.

Interestingly, however, the League of Municipalities has refused to agree to this VVPAT.  Does it have anything to do with the Bottom-Up-Budgeting largesse being distributed by the administration at the barangay level (P1 million per barangay)?

I have followed religiously all four oral argument sessions at the SC on two constitutional issues vs. Grace Poe. One, her eligibility or non-eligibility to run for President, given her inability as a foundling to prove she was born of Filipino parents, thereby failing to qualify as a natural-born Filipino. Second is her failure to prove that she has had continued residency in PH for ten years prior to election.

Of these two requirements to run for President, that she is a natural-born Filipino is the more emotion-laden issue. We see this clearly in the way the three SC justices, in grilling the lawyers of opposing parties. have sought to arouse enormous public sympathy over her being a foundling unjustly dealt.

This issue Poe herself has capitalized on in her public speeches that seek to tug at the heartstrings of the masa voters---even though the reality is that she has had a life of plenty under her adoptive parents, power film couple Fernando Poe and Susan Roces, here and in the US, where she studied in an elite school and maintained well-appointed homes and lucrative jobs.

The second issue against Grace Poe---her failure to present ten years continuous residency in the country, as required by the Constitution for presidential candidates--- is, however, what would ultimately disqualify her. This is the studied opinion of many lawyers who have been keenly following this issue. This is because this second requirement involves incontrovertible dates of entries and departures held by various agencies such as the Bureau of Immigration and Deportation, as well as the US Embassy where her application for US citizenship and renunciation of the same are clearly marked.  No two ways about it, unlike the citizen issue which lends itself to plenty of subjective interpretation.

As an assiduous watcher at SC oral hearings on the Poe issues, I find interesting the way the musical chairs are arranged in the Court, for or against the candidate. Evoking sympathy for Poe are Chief Justice Sereno and Associate Justices Leonen and Jardeleza, who each run over 3 1/2 hours of interpellations of Comelec Commissioner Arthur Lim, the adroit handler of Comelec's DQ case vs. Poe. On the other hand, clearly against Poe on the twin issues are Senior Associate Justice Antonio Carpio and Justices Teresita Leonardo de Castro and Arturo Brion, who voted with Sen. Nancy Binay in the nine-member Senate Electoral Tribunal against Poe, while five senators upheld her candidacy.

At times the pro and con justices slam one another outright, to the amusement of the audience. On the other hand, the other nine justices still have not clearly indicated where they stand in the issues vs. Poe.

Last Tuesday, Feb. 09, Justice Jardeleza  pointedly accused Comelec  of having deprived Poe of due process when it DQed her candidacy on the ground of her being a foundling and thus, not a natural-born citizen. Jardeleza argued that “There is a disputable presumption that a foundling is considered disputably a natural-born citizen” and that thus, Comelec’s summary DQ  was in gross violation of Poe's rights under the Bill of Rights. As a consequence, he stressed that having to rule on Poe's status was “an agonizing problem” for him.

Commissioner Arthur Lim politely but stoutly denied Jardeleza's accusation and argued that "there is only one truth here---that which is laid down by the Philippine Constitution: that no citizen can run for President unless he is a natural born citizen." In fact, the UP Law '69 alumnus stressed that "the issues here are “clear-cut, though somewhat complicated.”

In another corner, another citizen who was also DQed as a nuisance candidate took a potshot at the high magistrates for their double standard thus:

"If such is the justification for the majority of the high court justices to rule that the Comelec acted in excess of jurisdiction, just to enable Poe to run, despite her ineligibility to run for the top political post, then why has the Comelec been allowed to disqualify certain candidates who also wished to run for the presidency, and who, moreover, are natural-born Filipinos, who have not renounced their Filipino citizenship and who did not apply for a naturalized foreign citizenship, who can read and write, and have been staying all their life in the country? If the Comelec had no jurisdiction in disqualifying Poe, why did the SC favor the Comelec for having disqualified those qualified under the charter to run for the presidency, since they all meet the requirements of the Constitution?"
Top of Form

Posted by Veteran Journalist and Relentless Advocate of Truth at 10:16 PM