The inevitable happened at SC's first hearing on Grace Poe's DQ as candidate for president: Justice Diosdado Peralta raised query that she could be the daughter of an Ilocano "or even an Ilonggo like me"---if DNA tests were to be run again. Thus, this issue that has been bruited about in whispers came to fore at SC, drawing faint murmurs and even snickers. Historic photo of opposition reunion in martial law years---with passing of Nap Rama, all of them now united in Great Beyond.


Yesterday, Tuesday, Jan. 19, the inevitable---and perhaps the unthinkable---happened at the Supreme Court during the hearing on several petitions to disqualify Sen. Grace Poe from running for President. Associate Justice Diosdado Peralta, famous for his at times irrepressible sense of humor, tossed to Poe’s counsel, Alexander Poblador, a sensible question: why not just present findings of DNA tests run on the senator and her relatives which are 99.99% accurate, to end the issue of whether she's a natural-born Filipino or not?

While the Constitution firmly stipulates that only natural-born Filipinos can run for representative, senator, Vice-President and President of the Philippines, local jurisprudence accepts that if a foundling can present a DNA-certified blood relationship to a natural-born Filipino, this issue becomes moot and academic.

Justice Peralta had penned what's known in SC records as the "Caballero vs. Comelec" case, that cancelled the certificate of candidacy of Mayor Rogelio Caballero of Uyugan, Batanes on the ground that he was a Canadian citizen and non-resident of the place when he filed his COC. At the SC hearing on Poe's DQ, Peralta, after stressing his authorship of that decision, averred that “I don’t believe there are no relatives of Ms. Poe that can be found." In fact, he insisted, that missing relation "may be an Ilocano or even an Ilonggo like myself.”

At the mention of a possible Ilocano relation of Poe, the SC hall reverberated with audible murmurs as well as some snickers, for it has been whispered about in various circles for some time now that Grace Poe is secretly a child of the late President Ferdinand Marcos with a popular actress at that time.


In the Senate, in fact, it is a well-known joke so that Sen. Ferdinand “Bongbong” Marcos Jr. and Sen. Poe at times like to refer to each other in a sporting way as “Brod” and “Sis.” Recall that some weeks back, Bongbong challenged Poe in a joking manner to submit to a DNA test together, which the senadora simply deadma-ed. On the other hand, Poe went to some length to undergo a DNA test with some folks in Iloilo who may be related to her, but it proved negative.

Word from her camp is that she continues to look for relatives who could provide that vital key to her candidacy.  But what if suddenly she turns around and accepts Bongbong's challenge and their DNA tests turn out positive?

I suspect that Poe does not want to entertain that possibility because her being related to the late martial law dictator could dilute her present clean and well-scrubbed political image.

Interestingly, her adoptive mother, Susan Roces Poe, wife of FPJ, attended the SC hearing with her, and they stayed for over an hour, after which Grace excused herself to attend Senate session. Looking at the still attractive and well-coiffed Susan Roces sitting there and very serious in mien, a thought entered my mind: what if she and Grace underwent a DNA test and it turned out positive? It would only confirm what's being bruited about in speculations---that the senadora could be the daughter of Susan's sister, Rosemarie Sonora.


Yesterday's hearing at the SC was long drawn out and exhaustive, where aside from the recurring debates on Poe's natural-born status or the lack of it, many details were brought out by the Justices on the second issue bedeviling her. This is the residency issue that should support her claim to having renounced her US citizenship at a certain time, in order to establish domicile here.

There were a number of inconsistencies, however, in dates involving use of her American passport, which was especially explored by the very persistent Associate Justice Teresita Leonardo de Castro but which Poe's counsel, Alex Poblador, tried to heroically overturn.

De Castro stressed, for instance, that the fact that the DSWD initiates the process to prove that a child is  a foundling proves that contrary to the argument of the Poe camp, THERE IS A PROCESS THAT SHE HAS TO UNDERGO to prove her natural-born status---that in fact "birthrate citizenship" does not apply in her case; rather, it is citizenship by law.

In other words, what Justice De Castro was saying was that all the procedures being resorted to now in Poe's candidacy seem to contravene Sec. 2 of Article IV on "Citizenship," which says that "Natural-born citizens are those who are citizens of the Philippines from birth WITHOUT HAVING TO PERFORM ANY ACT TO ACQUIRE OR PERFECT THEIR PHILIPPINE CITIZENSHIP." (emphasis BOC's). Poe's lawyer Poblador, however, preferred to refer to it as "a series of incremental acts," and "an incremental process."

In the end it all boiled down to what was admitted by lawyer Poblador and the Poe camp:  that the inconsistencies in her record---her re-acquisition of PH citizenship through her oath of allegiance on July 7, 2006, her renunciation of her US citizenship on Oct. 20, 2010 but her continued use of her US passport up to July 2011, and the loss of her US citizenship in Dec. 2011, when the US Embassy in Manila issued a "certificate of loss of nationality of the US"---all constituted "honest mistakes." But such admission only seem to confuse the justices even more.


Whatever it is, Poe is in a jam at the moment, judging from the way her ratings continue to slide down, doubtless due to the uncertainty of her qualifying for the presidential race. Financiers certainly could be hesitant in contributing more to her campaign. I saw Isabela Rep. Georgiddi Aggabao at the SC hearing yesterday and he stressed that a faction of the NPC is backing up Poe and of course, it hopes everything turns out right for her.

But if the party supporting Grace Poe is quite worried about the result of the SC deliberations, it certainly is not showing it. The first SC session to hear all three private petitions seeking her DQ was held yesterday, Jan. 19, with Poe's lawyer Poblador taking the stand for a good three hours; the next one is scheduled for next Tuesday, Jan. 26. To kick off the SC session, her supporters held a mammoth, bouyant rally in front of the SC yesterday---jamming the entire area from Paco Park all the way to Padre Faura.


Grace Poe's ratings may be going down where once she was neck-to-neck with Vice President Jejomar Binay (the latter now has a 7-point lead over Poe in the four-candidate race), but it seems she still has substantial funding. There were a lot of young students in her rally crowds, but there were also the usual hakot crowds with their children in tow.

My fearless prediction, if the line of interpellation by the justices in yesterday's proceedings is any indication: the SC would thumb down Poe's candidacy. Unless, as rumor is going around, that the Palace is now shifting to Poe in view of Mar Roxas' unspectacular performance in surveys. Playing the Grace Poe card could complicate matters even in the SC.


The photo below is quite historic as it presents in one picture all the leading opposition leaders during the martial law years under President Marcos, who were all imprisoned by the dictator at Fort Bonifacio after he declared martial law in 1972.

The occasion shown below was the opposition leaders' very brief reunion when Ninoy Aquino was allowed a 36-hour furlough from prison to celebrate his wedding anniversary with wife Cory---an occasion obtained through the ministration of Jaime Cardinal Sin. Years later, these opposition leaders were to campaign under the Laban Party In the desire to participate in the April 7, 1978 elections for the Interim Batasan Pambansa called by Marcos, then under heavy pressure by the Americans to loosen up a bit on his martial rule. 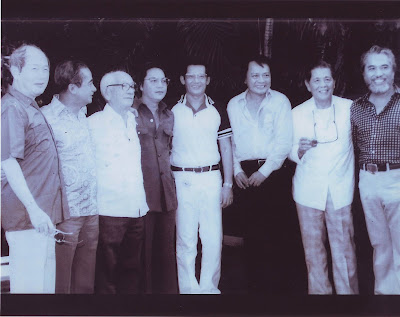 The great opposition leaders of the martial law years---now all passed on to the Great Beyond.

This photo surfaced during the wake last week at the Santuario de San Antonio, of Nap Rama who died at the ripe old age of 92---the last to journey on to the Great Beyond in this historic group shown above. Nap Rama was a fearless and distinguished writer of the Philippine Free Press who also served as Floor Leader of the 50-member Constitutional Commission of 1986 that drew up our present Constitution.

Though Nap Rama was much older than myself, I had the privilege to be his friend through the years that I was an active journalist, and we both were part of the "core group" around Speaker Jose de Venecia over the years. My profound condolences to his lovely widow, Paz "Lady" Ramos Rama and their children.
Posted by Veteran Journalist and Relentless Advocate of Truth at 8:19 PM