Sen. Juan Ponce Enrile did not deliver promised bombshell for reasons known only to him. He labored, however, to give nation sequential texts from various personalities that reinforced his theory: that P-Noy was in the thick of planning and executing Mamasapano plot, together with suspended Gen. Purisima, with Director Napenas as fall guy. Senate divided over loyalty to P-Noy, as AFP and PNP are over Oplan Exodus. 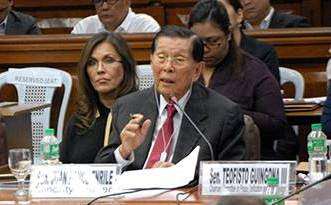 Listening to the seven-hour hearing of the Senate committee on public order and dangerous drugs chaired by Sen. Grace Poe last Tuesday, Jan. 26, on the SAF's "Oplan Exodus," I felt great sadness. At one point I could not help myself---I wept.  Having been a military wife for several decades it was quite painful for me to see officials of the two national security agencies of government---the PNP and the AFP---trade barbs and blame each other for the Mamasapano debacle before the entire nation.

I am sure that for many military officers and men, active and retired, as well as their families, the blame-game and public expose of security weaknesses and flaws proved to be a nightmare. I pitied especially the military as they learned of the SAF's venture into the lion’s den late in the day and when they were called to rescue the trapped men, details from the PNP were vastly incomplete. Yet the AFP officials had to bear much of the blame especially from Minority Leader Juan Ponce Enrile, who had jurisdiction of both agencies for 17 years in the Marcos regime.

I also pitied the PNP officials, led by then acting PNP OIC Leonardo Espina, who were kept out of the loop on Mamasapano but who had to share the onus of blame and shame for the indefensible secret plot hatched by President Aquino and his cohort, suspended PNP Chief Alan Purisima, and their fall-guy, SAF Chief Getulio Napenas.

Last Tuesday’s Senate hearing was called at the behest of Sen. Enrile who claimed to have new information on Mamasapano. The nation stood still that day, glued to radio and TV---with majority of senators present, as were top brass of the PNP and AFP, including officers just retired, who had played significant roles in that monumental debacle.

Media hyped the anticipated exposes of Enrile but when he stuck mostly to revelations of text messages exchanged through that fateful day, the public was disappointed. I presume that the tape supposedly of a conversation between a lawmaker and a PNP official on the debacle was keenly anticipated, and when it was not presented by JPE, folks began to ask if he was  daunted by the threat of Senate President Franklin Drilon that unauthorized use of tapes could be subject to penalty under the "Anti-Wire-Tapping Law."

JPE might have asked himself if he’s prepared for another lawsuit that could return him to hospital arrest.

But Enrile nonetheless came very prepared. Instead of the bombshell tape, he revealed verbatim text messages culled from subpoenaed cellphones of major players in the Mamasapano drama, beginning with President Aquino.  He used the texts to establish not only the sequence of events, but also the role of the dramatis personae. Most important of all, the texts showed President Aquino’s lead role in the SAF operation on Marwan---where before it was only the narration of Napenas about how he and suspended PNP Gen. Alan Purisima were called to Bahay Pangarap on Jan. 9, 2015 to finalize details of the SAF operation.

The texts of various officials, as revealed by JPE, showed that P-Noy was on top of the SAF operation drawn up by Purisima and Napenas and that he approved it---even though P-Noy’s loyalists at the Senate, led by Senate Chief Franklin Drilon and including Senators Bam Aquino, Antonio Trillanes and Sonny Angara, exerted every effort to make Napenas the fall guy. Moreover, the texts revealed that the President knew quite early about the fate of the entrapped SAF commandoes---having been apprised by DILG Secretary Mar Roxas, who knew nothing about it previously, just prior to their flight to Zamboanga that early morning.

What was interesting was that once in the plane and on arrival in Zamboanga, the President’s cellphone quieted down and no reaction was obtained from him by text. As DILG Secretary Roxas noted, in response to a query from Enrile, everything seemed “normal” on the plane and in Zambo---although some media people who were with his party were later quoted as saying that P-Noy appeared quite stunned by what was happening to the SAF men.

The bigger drama at the Senate hearing involved the efforts of both PNP and AFP leaders to escape blame for the SAF debacle---recorded in texts as early as the first waking hours of that fateful day. The AFP officials, led by former Chief Gregorio Catapang, understandably sought to exculpate their branch of service from blame in a prepared presentation.

They argued that they knew nothing about the on-going SAF operation until the PNP commandoes ran into deep trouble. The AFP officials stressed that they were hindered from rescuing by the lack of information from the SAF command as well as in the field on such details as troop positions and strength, civilian population density, etc.; besides, tanks couldn't venture into marshy terrain.

At that point, many viewers began to wonder if all the excuses offered by the military were not simply politesse in lieu of outright admission of a stand-down order on the AFP---which its commanders uniformly denied.

As PNP and AFP officials tossed blame to and fro like a ping-pong game, Enrile suddenly blurted out, “Kasi nakialam ang Presidente ninyo!” That reflex statement, followed minutes later with another scathing "Someone's lying out here," drew tense reactions from committee chair Grace Poe and Senate Chief Drilon. One could slice the tension.

For decades the AFP and PNP have worked relatively well but the SAF operation in Mamasapano that fateful Jan. 25 a year ago sadly put these two armed services at odds with each other--- because, as JPE stressed, President Aquino chose to compartmentalize the operation (JPE kept calling it “compartmentation”).

Why this operation was undertaken by the PNP’s Special Action Force in the marshy terrain of Mamasapano that was perhaps better suited to the Army’s infantry provokes more queries than answers.  Could it be because, as former SAF commander Napenas pointed out, the AFP "is compromised?” What exactly did that mean?

Did it have anything to do with, as Napenas also noted in response to a senator's query, the fact that US forces supplied training, equipment and personnel , as well as the bounty of $5 million for the head of Marwan, the Malaysian terrorist wanted for the Bali bombing of 2004, that killed many people, including some 200 Americans and Australians?

P-Noy is noted for his fierce loyalty to people he has known for years. This could be the reason Gen. Alan Purisima, who at that time was serving suspension from the Ombudsman on graft charges, was handpicked to carry out the mission planning and execution (not just the role of “facilitator” as he claimed about himself). On that fateful day, however, to add more weird details, Purisima was monitoring Oplan Exodus from his Nueva Ecija home by text!

Interestingly, too, acting OIC PNP Chief Leonardo Espina, who replaced the suspended Purisima, was kept out of the loop despite his excellent reputation; the entire hearing must have been so painful for him.  But it was not only Espina who was shut out: Mar Roxas and Voltaire Gazmin, charged with the nation’s internal and external security, had no idea whatsoever of what was cooking at Bahay Pangarap, until the whole thing blew up in everyone’s faces. JPE went hyperbolic on this fact.

Mamasapano was the kind of plot that has practically no answers but all questions---and insane ones at that. As I listened to last Wednesday's Senate hearing unfold, I couldn’t help but think of the US plot to get international terrorist chief Osama Bin Laden somewhere in Pakistan a few years ago---one of the most daring feats ever carried out in the spy world. I imagine it must have taken many weeks of planning and very tight, clandestine coordination among various agencies of the US government. There was just no room for mistakes. Its success took the world's breath away!

Mamasapano, by contrast, seemed fated to suffer mistakes because it was so amateurishly planned and carried out by only three bumbling people.  Unfortunately  44 SAF lives were lost owing to their blunders and the memory of those heroic commandos who rode into the valley of death will haunt the nation for a long time.
Posted by Veteran Journalist and Relentless Advocate of Truth at 10:14 PM