DQ issue vs. Grace Poe is top story, with Imelda Marcos parrying Poe's paternity issue in an oblique way. In the SC the DQ issue is super-high stakes game, and while some insiders opine that voting among the justices could be quite close, many factors could come into the picture that are tough to predict. 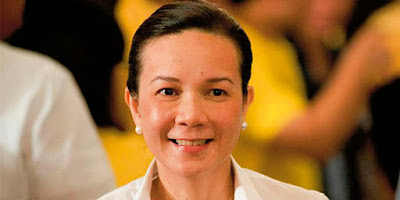 In various social gatherings over the holidays the topic was mainly politics--and invariably it was about Sen. Grace Poe and her fight to stay in the race.

Everyone at  table laughed with Ms. Marcos, and then an intrepid visitor, encouraged by the Imeldific's nonchalance, showed her  a photo of Grace Poe circulating in the internet, that cleverly mingled features of her face with those of the late strongman (as only the internet can manipulate). Imelda took a good look at it and then laughed with ill-disguised amusement.

The Comelec's DQ was based on the grounds of her alleged failure to present conclusive evidence of her being a natural-born Filipino citizen and her lack of the 10 year-residency required by the Constitution for presidential candidates.  Sereno's twin TROs vs. Comelec are valid under the rules of the High Court in emergency cases, but what made their issuance very dramatic was that aside from being ordered at the very end of the work-year and with the SC on recess until Jan. 10, these TROs will save Poe's name from being delisted in the ballots to be printed by the Comelec by mid-February.

Adding to the high drama was the fact that the SC also issued a "revised TRO" the day after its TROs vs. Comelec---ordering the three private practitioners who had also filed DQ cases vs. Poe, to also submit their comments within 10 days from notice. Hearing on all these four DQ cases is set for Jan. 19.

One petition was earlier filed by lawyer Manny Luna on behalf of former senatorial candidate Rizalito David in the Senate Electoral Tribunal (SET) and subsequently appealed to the SC. DAvid accused Poe of being ineligible for the Senate, owing to her alleged failure to present proof of her natural-born status (a requirement also for senatorial candidates) and asked that she be excluded from the Senate.

The two other petitions were filed with the SC by former Sen. Francisco Tatad and former UE Law Dean Amado Valdez, seeking Poe's DQ from the presidential race.

Standard columnist and former Quezon Rep. Danilo Suarez opined that the SC "gave what may be deemed a belated Christmas present to Senator Grace Poe"  in the form of the TROs vs. the Comelec's DQ order. Why so?

For one thing, the SC TROs render moot for the moment the three private petitions to DQ Poe, whose obvious intent is to seek the SC's final ruling  early enough---so that Poe's name would be prevented from being entered into the ballots to be printed early next month. Final printing of some 50 million ballots for the May 2016 elections is set by Feb. 10---a threshold date that cannot be moved any more.

To some observers, the SC's scheduled Jan. 19 oral hearing comes too close to the printing of the ballots. After that hearing  usually a memorandum is required of the parties within 10 days, so that the earliest date for submission of the SC's final decision could be at the end of January---unless the High Magistrates, driven by a sense of urgency about the ballot printing, would come to a vote within days after Jan. 19.

But even if the magistrates could arrive at a vote within this time frame and they indeed sustain the Comelec's and three private petitions to DQ Poe, under the rules of court she is allowed to file a motion for reconsideration. That could mean easily another two weeks whereby Poe---and her followers---hang by a thread.

Poe argues that these three justices had already voted, along with Sen. Nancy Binay,  to DQ her in the recent SET decision on the legitimacy of her election to the Senate. These four SET members held that Poe is not a natural-born Filipino---vs. five senators who voted to allow her to stay as senator. Poe argued that the three justices "had already prejudged" her case and therefore they ought to inhibit themselves from the SC deliberations on her case, and much less vote on it.

Frankly I cannot follow Poe's argument in seeking the three SC magistrates' inhibition. They sit in the SET by virtue of the decision of the entire SC and it's a function they fulfill under the Constitution. True, they voted against Poe in the SET decision on her eligibility to sit as senator, and it's entirely foreseeable that they would vote the same way in the SC case,  but why should that be taken against them?

Some SC insiders predict that the vote on Poe's fate would be close and could go either way, though many more observers are predicting her DQ than not. Personally I think she would be DQed as the grounds are quite clear. One thing, however, should be kept in mind---pending in the SC is a super high-stakes game and anything can happen.  For instance, how the five justices appointed by President Aquino would vote is a matter of high interest, for it could indicate that P-Noy could be playing the Grace factor as well, in the event that LP candidate Mar Roxas doesn't rise enough in the surveys.

For instance, a lot of speculation is being attached to the fact that Justices Mariano del Castillo, who had voted with the administration on various cases, and P-Noy appointee Marvic Leonen got to handle the Poe case in a raffle among the justices.

But what happens if Poe's eligibility cannot be decided early enough by the SC with finality? This means that her name would have to be included in the ballots printed by Comelec.  What happens if she is DQed, but  wins the elections nevertheless---because her name has remained in the ballot and due to the sympathy votes that Filipino voters have been known to cast (it's generally acknowledged that P-Noy won because of overwhelming sympathy over Cory Aquino's passing)?

Senate President Franklin Drilon has been pressing for the early resolution of the DQ issue vs. Poe, as he precisely fears that trouble could ensue if she's DQed but still wins in the vote.  There's reason in his current appeal. Though Poe's followers have somewhat dwindled owing to the uncertainty of the ruling on her cases, it's easy to foresee that they could foment trouble and unrest if she is DQed but wins the elections.

The SC has to rule decisively and with finality ASAP on Poe's case---for the stability of the country and in fairness to her. If she is not qualified as per the Constitution, then DQ her soonest.

Posted by Veteran Journalist and Relentless Advocate of Truth at 11:39 AM