The Aquino administration has bungled handling the “Laglag Bala” or “Tanim Bala” scam at NAIA through a series of stupid moves. First it pooh-poohed what was happening as isolated instances---a tiny drop in the sea of millions of airport departures and arrivals;  then there's the theory that these bullets are actually used by passengers as amulets to ward off evil spirits, or were supposedly carried by passengers straight from the shooting ranges. All these rationalizations, despite tearful protests from scam victims, including elderly OFWs and an American missionary bound for Mindanao. 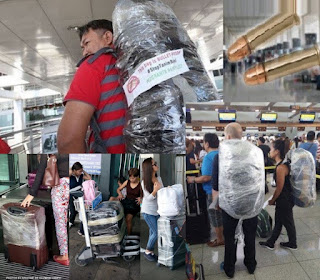 Aquino officials met these episodes with their own protests, with DOTC Secretary Jun Abaya sticking to his statistics and Airport Chief Jose Angel Honrado playing tough about snowballing calls for his resignation. Then the statement attributed to LP presidential candidate Mar Roxas: “I really don’t need the vote of the OFWs.”  It’s hard to believe a rational man would pooh- pooh the 11 million OFWs,  but there has been no denial from Mar's camp.

All these episodes on ”Laglag Bala” and “Tanim Bala” kept local and international media spinning, earning PH new notoriety abroad. But the worst repercussions are among the OFWs, to whom the P-Noy administration appeared quite uncaring and insensitive. This was reflected in recent statements of  Balanga  Bishop  Ruperto C. Santos, who heads the Catholic Bishops Conference of the Philippines (CBCP)’s Episcopal Commission on Migrant and Itinerant People.

In a news release, Bishop Santos admonished OFWs not to vote “for candidates who are insensitive and indifferent to the ‘tanim-bala’ problem” and "who are not compassionate to those who had been victimized particularly overseas Filipino workers as well as tourists.” Santos urged the public “to take a united action against the scam” and adopt a “strong voice in displaying indignation against the issue of ‘tanim-bala’ at the country’s airports.”

The OFWs, already incensed about earlier attempt of Customs Chief Bert Lina to subject balikbayan boxes to open inspection, are susceptible to Bishop Santos’ exhortation which, in turn, could affect  Mar Roxas's candidacy.

The Bishop also decried the slow government response to the ‘tanim-bala’ issue, complaining that “We released a letter on the problem as early as September and to this day, no one has been apprehended. There are no leads as to who the perpetrators might be.” To Santos this simply shows “the lack of compassion and sense of urgency, and insensitivity of concerned individuals who are remiss in their duty to protect and serve the public.”

In view of the denial mode and lack of clear idea from the authorities on how to handle this internationally embarrassing problem, Bishop Santos  urged airport personnel to just confiscate the bullet---just like what's routinely done with knives, pointed objects, and other prohibited liquids and chemicals when found in the possession of a passenger---and let him go.

This same stand has been echoed by various people, such as former Rep. Roilo Golez and TeddyBoy Locsin, but until now confusion reigns at the airport on what to do---scaring OFWs about possible arrests at NAIA this December. This has prompted Public Attorney Persida Acosta to stand watch over the OFWs (Persida reminds me of the Statue of Liberty at the mouth of New York Harbor, offering solace to migrants from the Old World) and private lawyers like Alice Risos-Vidal to offer their services free to harrassed OFWs.

In the Aquino administration’s thinking, the Conditional Cash Transfer (CCT) program---which has already spent some P75 billion in monthly dole-outs to some 4.4 million families (roughly some 20 million Filipinos)---is crucial because it alleviates the plight of very poor families while keeping their children in school. One condition for the dole-out is that the children attend school. But expert opinion holds that, in fact, poverty has worsened. As shown by the recent SWS surveys, the latest hunger figure is three points up from the 12.7 percent (2.8 million families) recorded in the preceding quarter;  that in fact it was the highest since December 2014’s data of 17.2 percent.

I have never been a believer in the CCT program as one of its toughest aspects is THE DIFFICULTY OF HANDLING AND MONITORING ON THE GROUND SUCH GARGANTUAN FUNDS. So much is left to the discretion of ground handlers of Dinky Soliman, and I know from personal testimonies by my house-helpers over the years that the funds that finally get to their families are irregular and incomplete. This was what led the Arroyo administration to give up the CCT after an initial try.

This is not to mention the dole-out mentality that CCT inculcates among the poor and its use for political patronage especially during this campaign period. Rather than CCT, what should be done is to establish branches of TESDA (corruption-free) in strategic regions of the country, where able-bodied citizens of both sexes could be trained in various technical skills to supplement the yawning lack of formal education in the grassroots

Archbishop Emeritus Oscar V. Cruz, writing in Daily Tribune recently, quoted the price tag of over P400 million to be forked out by the Philippine government in hosting the APEC Summit from Nov. 17-20, 2015. It’s a far cry, he says, from the under P100 million the government spent in 1996, when it hosted the first APEC Conference in Subic Freeport in President Ramos’ time. But with all due respect to the militant bishop, this jump is understandable, given that it has been nearly 20 years ago and that the first APEC Summit took place in a small and highly controlled environment; whereas, this second conference in Manila has to meet head-on the gargantuan problems of securing 20 world leaders, traffic congestion on land and air, containing at manageable levels the presence of the poor and many other urban problems that will bedevil it.

As a citizen I feel there’s nothing better we can do as a people than to pray that the many problems of APEC 2 would be overcome; that our foreign heads of state guests and their respective entourage would be safe here, and that the summit proceeds and concludes smoothly and profitably for all participants, including our country. We cannot at this point count the costs in terms of pesos and centavos as the prestige of our country as  host is at stake.

Already the country’s reputation has been terribly tarnished by the “Laglag Bala” airport bullet scam, with all the bad publicity it has reaped in various foreign lands. Its timing on the eve of this APEC Summit is so unfortunate, and God knows when we could recover from it. The least we can do is to make the Summit as smooth as possible.

But one economic cost that will affect so many people involves the cancellation by Philippine Airlines of over 200 flights 14 days prior to the APEC Summit of Nov. 17-20.  The idea is to decongest air traffic and allow smooth flights of all the international VIPs. PAL releases spoke of the difficulty that many of its passengers, who had booked and paid in advance for flights to Manila especially with the onset of the Christmas season, are encountering with these cancellations. The dislocation of many thousands of passengers locally and in various foreign destinations is a nightmare in itself.

In this connection the Center for Strategic Initiatives (CSI), a leading think-tank, gave unsolicited advice to the Department of Transportation and Communication not to cancel these PAL flights but TO TRANSFER THEM to Clark International Airport in Angeles City during the pendency of the Summit. In fact the CIS recommends the transfer not only of APEC-related flights but other flights local and international from Manila  to Clark, as the latter has the suitable runway and equipment to handle them. The only thing needed is to provide shuttle buses to and from Clark to Manila and various points.

Utilizing Clark as an alternative to NAIA is most sensible and I myself am witness to how easy and convenient taking off and landing there is; in fact, given the congestion at NAIA I have come to prefer Clark for trips to Europe. Clark has also been providing safe haven for planes running low on fuel as a result of the traffic congestion at NAIA.

Metro Manilans can take the shuttle bus to Clark free of charge from Resorts World in Pasay City in front of NAIA 3, and for Quezon City and Caloocan dwellers, from Trinoma Center on Quezon Avenue. Return trip to Metro Manila from Clark is also provided by shuttle buses free of charge.

Clark Airport with its long, superb runway built by the Americans is safer, and congestion and hassle-free than NAIA.

Posted by Veteran Journalist and Relentless Advocate of Truth at 7:31 PM