Two views from concerned and sympathetic individuals: one on the expat community's views on the current political “circus” and widening gap between rich and poor in our country; the other on the recently-concluded “Synod of the Bishops on the Family.” Please read these pieces carefully and ponder on their message.

The following consists of very thoughtful observations emailed to me by an expat businessman who has lived and worked for a long while in the Philippines as well as in various other countries in Asia, where he has also traveled extensively.  Since his retirement  from active business  this expat has chosen  to live in the Philippines. I shall not disclose his identity,  but it’s obvious that he cares a lot for the Filipino people and is saddened by recent political developments.  Below are his meaningful comments:

“ I shall read your polbits on a regular basis as they increase my understanding of Filipino politics. I have been an observer of the chaotic political scene here since 1998 when I began working here and have stayed on in this country since then. The political scene seems at present more disturbing than ever. The election circus has started preparing the program but it remains uncertain who will be incorporated  to perform. Meanwhile the aspiring candidates are promoting their act.

"How can the public make up its mind under these confusing circumstances. The end result is that the winning candidate may garner only 20-30% of the votes---a minority president.

“Democracy was not intended that way. Charter Change should revise the election process in terms that if there is no candidate who wins an absolute majority of the votes, the two contenders with the most number of votes should run again for a final ballot. This process is already applied in a number of countries (called a run-off election---BOC).

“I have been living in the Philippines now for one and a half decades after having also worked and lived in Thailand and Malaysia and traveling extensively all over Asia. I have wondered why some countries have done better than others and in particular why the Philippines which had a head start after independence was unable to get its act together and has become the laggard in terms of poverty alleviation, employment creation, infrastructure and foreign direct investment (emphasis BOC's).

“I have come to the conclusion that ‘culture matters.’ The culture of impunity, nepotism, patronage and money politics is to blame as it is so deeply imbedded in the ‘Filipino way’ of doing things in business and politics, that it hinders progress in development (emphasis BOC's).  Foreign observers are worried by the rising inequality between the haves and the have-not's in this country and they wonder about the level of ‘tolerance’ of the masses.

"In a number of instances I have gotten my frustration with the lost opportunities of the Philippines off my chest in private publications.

"My hope is that my view on how western foreigners look at the Philippines would enhance reflection on how cultural aspects of Philippine society prevent this country from really taking off in terms that the economic growth would be shared by the majority of the population and not only for the elite and middle class.

“My observation is that "culture matters"  are trickling down very slowly.  It seems that most members of the academe know what is wrong, but politicians prefer to ignore the "shameful" truth, or only pay lip service to the need for change, which is not in their interest.

“Please continue to write about the flaws in your society, in the hope that it would open the eyes of your readers and pave the way to a more prosperous and just society shared by the elite and the middle-class with the more impoverished sectors.  The Filipino people deserve it.”

Below is a thoughtful and balanced observation submitted by a friend of mine on the recently-concluded “Synod of the Bishops on the Family”  at the Vatican in Rome, presided by Pope Francis:

"The Synod on the Family is a crossroads where some participants who appeared to have manifested a moribund understanding of doctrine took a right turn, while others who displayed a reckless disregard for the unchangeable teachings turned left.

"Happily, there were those who, transcending the cerebral approaches and the mania for documentation, have moved straight ahead, under the aegis of PRAYERFUL DISCERNMENT.  It is these shepherds who have the tools for applying truths to healing the wounded in the Church, not in a rote manner, but with personal attention, mercy and compassion.

"In their obsession with firmness, those who took the right turn will have difficulty distinguishing between compromise and mercy because they will suspect acts of mercy to be compromisory absolutions.  If they were physicians, they would be the type of physicians who would give up on most injuries as hopeless.

"Those who took the left turn will end up thinking that mercy justifies any absolution.  If they were physicians, they would be the type who would deny serious injuries.

"Those who moved forward will, together with Pope Francis, acknowledge
unchanging doctrine and embark on seeking out the sheep who are walking wounded, understand each one, diagnose them, and formulate appropriate medication---clinical, social, legal, canonical, spiritual remedies -- to bring them to the healthiest possible state.

"In summary, some have locked themselves within a circus of traditionalISM, a
circular road of status quo; others to liberationISM, a road to perdition. And then there are those who are moving forward with Pope Francis, on the road to
MERCIFUL HEALING, which is essential to the mission of the Church.  This is what the synodal crossroads would look like: 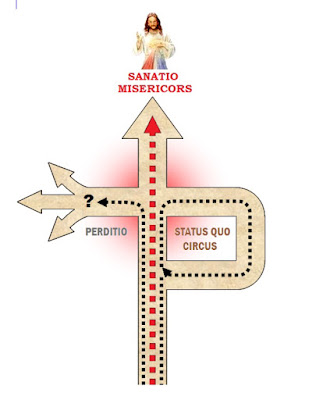 "Needless to say, Pope Francis will be ministering mercifully as well to those who insist on going around in circles and those who think that doctrine is passé.

"After all the hullaballoo, the Synod is not saying anything new as far as basic
pastoring is concerned. Even the resolution to apply "discernment" is an age-old procedure. It will be applying the same Gospel principles in meeting new challenges. While new structures and institutions may be called for, there will be absolutely no need to change the tenets of faith and morals.

"What we can perhaps consider an "improvement" wrought by the Synod is a deeper realization of the Church's FAMILIAL CONSTITUTION:  that it is rooted in a Family, that it is composed of families, and that it is itself a Family---God's Family."

Posted by Veteran Journalist and Relentless Advocate of Truth at 5:59 PM