Tribute to a good friend and great Filipino---Joker Arroyo 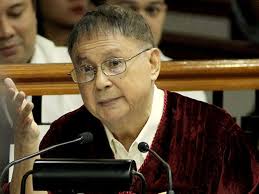 In the corruption that enveloped the Senate during the trial of Chief Justice Renato Corona, where the votes of various senators were bought and paid for by taxpayers’ money without their consent, Sen. Joker Arroyo’s defense of the CJ stood out like an isolated beacon of light in the vast darkness. In his 20-miniuter speech he introduced a defense concept of Corona that was new to non-lawyers like myself---the “BILL OF ATTAINDER.” It made sense to us non-lawyers as he explained it, but by then it was too late. Money had gotten to many of the senators who went for the kill.

As Joker Arroyo explained it, a “ ‘bill of attainder’ is a law passed by one (chamber of Congress) and approved by the other, CREATING AN OFFENSE WHERE THERE WAS NONE, INVENTING A CRIME OUT OF ACTIONS, WILLFUL OR NOT, THAT WERE INNOCENT WHEN THEY WERE PERFORMED. It is a legislative act of convicting an accused of acts that were not offenses in the very measure by which he is condemned--- through a vote instead of a trial on the basis of accusations taken as proof.” (emphasis BOC’s).

Arroyo warned that the Senate “could be moving toward a bill of attainder” that would mock the Constitution---making a crime of something that was not such at the time of the supposed offense.

Joker then stressed that “I cannot imagine removing a chief justice on account of a SALN.” The issue then under hot consideration for half a year in the Senate---it couldn’t have been a “debate” as there seemed almost only one side, which was, to condemn Corona for reasons other than his SALN--- was whether the Chief Magistrate paid the correct SALN. It was an issue that would have hounded the senators were they on trial themselves, for as anyone can guess, doubtless none of them paid the correct SALN. In fact, perhaps nobody ever did in this country---until that point when Corona was convicted ostensibly because of improperly-filed SALN.  From then on, officialdom began to fear this heretofore harmless animal.

Ironically, conviction came despite the fact that the official who should have had the last say on the SALN issue, then Civil Service Commission Chair Francisco Duque, had issued a statement that appeared to back up Joker Arroyo’s near-solitary stand (only two other senators, Miriam Defensor Santiago and Ferdinand Marcos Jr., voted to acquit Corona).  Duque stated without equivocation THAT A FAULTY SALN COULD BE REMEDIED AND CORRECTED WITHIN A GIVEN PERIOD OF TIME. In other words, Duque argued indirectly---and it took a lot of guts for him to do so, even if he was protected by a seven-year constitutional tenure as CSC Chair---that Corona should not be convicted at all.

But by then Chair Duque’s reminder was ignored, for the minds of most of the senators were already made up the week before; and we daily trial-goers could sense it. As Sen. Jinggoy Estrada later revealed, what sealed conviction of Corona were the many millions of pesos released to the senators through a memorandum of availability by then Appropriations Committee Chair Franklin Drilon, about another new animal--- the Disbursement Acceleration Program (DAP). Thus, the velvet crimson robes the senators wore as impeachment judges didn't help many of them act nobly.

Joker Arroyo must have been aware of this recent happy development at the SC before he passed away, and he must have felt vindicated about his stand in that Senate Trial of the Century. In fact, as he condemned in his acquittal speech the “naked power” being used to convict the sitting Chief Justice on a non-existent crime when the so-called offense was committed, Arroyo noted its brazen similarity to 1972.  He warned that “IT IS DANGEROUS NOT TO DO WHAT IS RIGHT WHEN SOON WE SHALL STAND BEFORE THE LORD.” (emphasis BOC’s).

Well, Joker is standing before the Lord now, and interestingly his words uttered in the hallowed halls of the Senate three years ago seem like a grim reminder to present-day politicos who seek to foist brazen acts of legal impunity. Never in the Supreme Court's history have so many acts of the Executive Branch been challenged as now.

Many pundits and netizens will be commenting about the integrity of this "Lion of the Senate" who snubbed the DAP and PDAF and who earned the title of “Scrooge of the Senate” because he kept his staff, led by his loyal assistant, Delfin Espiritu, to bare-bones---just three people. He was not known to indulge in the extravagance of his colleagues, even in foreign travels and other perks.

I have my own recollections of Joker Arroyo that I want to share with my blog friends. The friendship between Joker and myself and my husband went back a long way, and he was the first to write Col. Cunanan a congratulatory note when the latter earned his first star. But among my memories of Joker one truly stands out.

The first many months of President Cory’s term were rocked with coup attempts and among the complaints of the coup plotters was that she was surrounded by “communists,” led by Executive Secretary Joker Arroyo. I would chuckle at the criticism, for this Bicolano hacendero who relished only the finest brandies and champagnes (he used to gift my husband a bottle of Dom Perignon every Christmas for years) was the last thing from being a Commie.

But despite my attempts to defend him in military circles, the perception grew louder and louder and helped to rock the Cory administration. Cory was being pressured to let Joker go.

One day I was in the Officers’ Club at Camp Aguinaldo for a function and fell hot in debate about this “Commie” subject with some officers, but I soon realized  the futility of arguing with them. Then and there I called Joker at his office in Malacanang and told him of what transpired. I remember myself telling him, quite tearfully, “Joker, mag-resign ka na para matigil na ang kaguluhan. Do it for country.”

He listened quietly, but inside he must have balked at my pagka-atrebida, dictating to the “Little President!”  In another two weeks, however, he submitted his irrevocable resignation to President Cory. This is not to say that I was that influential with him in those days, but my nudging might have been the proverbial straw that broke the camel’s back---especially since I was from the establishment.

A few weeks later it was Joker’s birthday and many friends gathered at his Dasmarinas Village home to celebrate. Cory came and it was like nothing had happened. That was Joker---a first-class patriot who deeply loved his country and whose integrity was unquestioned.

Since the Senate impeachment days I rarely ran into Joker anymore, but one day in later June this year my phone rang and that familiar parang kumukulong-mantika voice came on, sounding a little less kumukulo. I was checking my directory and came across your name, he said, and I just wanted to check whether your phone is still the same.  We chatted, made chismis about various people, including the boyfriend of a common friend.  I was happy to hear from him and it was like old times.

Then I told him about the brilliant young Filipino classical violinist Chino Gutierrez, whom I have been helping since way back, and how he needed financial assist badly in his studies in Munich and for concertizing and international competitions. Can you help naman? I asked. Joker probably grumbled inside, pambihira naman itong babaeng ito, I make that one call in a long while and she had to end up soliciting help for someone. But he still came across with a tidy sum for Chino.  That’s Joker Arroyo.
Posted by Veteran Journalist and Relentless Advocate of Truth at 8:12 AM