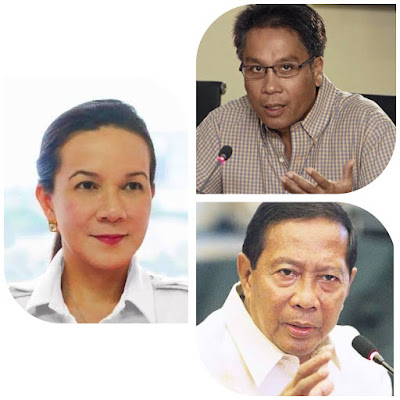 In a stunning development, the Supreme Court has issued a one-month TRO vs. the Sandiganbayan’s proceeding with the trial of detained former President Gloria Macapagal Arroyo, now unopposed re-electionist representative in her native Pampanga. GMA’s defense in the lone existing case filed against her for alleged plunder in the four-year old PCSO case was doubtless strengthened by the position taken by the UN Technical Working Group on Arbitrary Detention (UNWGAD), which ruled that GMA’s continued detention violates international human rights standards.

All of Arroyo’s co-accused in the PCSO case have either been released on bail or acquitted because of weak evidence, but GMA continues to be detained in Veterans Hospital and denied bail. Her lawyers have argued that “Not a single one of the 637 exhibits offered by the prosecution, nor a single testimony of the 21 witnesses of the prosecution was offered…to prove that respondent Arroyo amassed, accumulated or acquired even a single peso of the alleged ill-gotten wealth amounting to P365,997,915.00 or any part of that amount alleged in the Information.”

The UNWGAD resolution, won with the help of international lawyer Amal Alamuddin Clooney, wife of American movie star George Clooney, has encouraged GMA's lawyers to re-file for bail during the pendency of her PCSO case. GMA’s case has won sympathy here and abroad---owing, in large part to the fact that she is the only one of a dozen accused who has remained in detention despite the lack of evidence by the prosecution and her poor health.

Aside from her spine illness which an operation some years back failed to address, causing persistent pain and necessitating her wearing a neck brace, at this moment she is confined for two days at St. Luke’s Hospital in QC because of increased weakening on her left side, which could arise from heart complications.

Various commentators have spoken about perceived injustice in her case, but with the UNWGAD’s much-publicized opinion on the violation of international human rights standards in GMA's case, the limelight has focused more sharply now on the continued denial of bail for her, despite the lack of damning evidence.

The UNWGAD  stated that "Mrs. Arroyo was denied bail on grounds that are not compatible with international law; she did not benefit from the presumption in favor of bail; she was denied bail exclusively on the basis of the alleged strength of evidence against her; measures alternative to pre-trial detention were not considered and there were undue delays in considering her bail position in the proceedings against her as a whole."

Standard columnist Rita Linda Jimeno recently argued that with the APEC Summit drawing world leaders to the Philippines next month, the Aquino administration risks more severe criticism over its continued refusal to allow the aging and ailing former President to post bail. It would highlight growing perception that this administration is quite vindictive. After 93-year old Sen. Juan Ponce Enrile won bail from the SC on humanitarian ground, all the more that GMA’s case has evoked sympathy.

It's good for the administration to note that in this election year, the Liberal Party could ill-afford to ignore GMA's plea for bail. For instance, in GMA's native Pampanga, the candidate for governor is running unopposed and so is GMA in her district. Those could spell solid votes against the LP.

Sen. Miriam Defensor Santiago refuses to bare her medical records despite public request by a woman doctor, on the ground that these records are private to her alone. Many would beg to differ with MDS. She is running for the highest and toughest post in the land, and few issues are more relevant than her health, especially since she has been absent from the Senate for a long time now because she has stage 4 cancer. The chamber as well as the public have been most accommodating to her about her illness, but her run for the presidency makes it imperative that she bare her medical records fully---- instead of merely claiming she’s already well.

If this case were in the US, MDS cannot even get to first base politically following her claim of illness;  in fact, in the US, even the slightest whiff of rumor about a candidate's adverse physical condition would be ground for the subpoena of his or her health records. Until MDS bares her full medical records she'll likely be treated as a joke in the current campaign trail.

In fact, already there's talk that she is running only to give her supposed VP, Sen. Bongbong Marcos, an added forum for his campaign.

Last Tuesday evening a group of close friends was invited to a catching-up-on-politics dinner at the residence of former Speaker Jose de Venecia and his wife, Pangasinan 4th district Rep. Gina de Venecia who’s running for reelection. These friends have remained close-knit for many years and as has been our custom in past elections or on crucial issues, at Tuesday's gathering we held a straw-vote on preferences for president and vice president. The results showed how diverse our political leanings are and how much we respect one another’s views.  It was enlightening, and fun, fun, fun.

Predictably there were votes for Grace Poe, Mar Roxas and Jojo Binay ---reflecting pretty much the survey results of Standard’s veteran pollster Laylo. There were strong advocates for Mar and Binay, with Grace Poe seemingly held at arms’ length primarily because of the various disqualifications filed against her and what one felt was her “too strong sense of entitlement.“ For VP, there were votes for Bongbong  Marcos that simply discombobulated my brilliant friend Cecile Guidote Alvarez, who argued that her objection is "nothing personal" but simply a rejection of "historical amnesia."  Mar managed to pull up somewhat running-mate Leni Robredo (who was President Noynoy’s singular choice for Mar’s VP) but Greg Honasan hardly squeezed in, voted by a Binay loyalist.

I cast an abstain vote at that gathering---the only one who did---as at the moment I cannot seem to prefer anyone in the horizon. Moreover, I lament that our politics has not matured all these years, in fact it has remained infantile and all too fixated on show-biz glitter. Folks can't seem to separate politics from show-biz, as evidenced by the fact that cinema and TV stars have come out of the woodwork in full force, to run for public office. I'M CONVINCED ABOUT THE URGENT NEED TO SHIFT TO THE PARLIAMENTARY/UNICAMERAL SYSTEM.

More interesting, however, was that while the guests showed more or less equal preference for Poe, Roxas and Binay, the household staff of JDV who also cast their “votes” in secret showed clear preference for Binay over the other two. The conclusion, as one guest noted, was the evident class divide where Binay was the preference of the lower-income group. He seems to have a virtual lock on about 23-35 percent of the total vote which is  from the masa.

There was loud cheering inside the De Venecia kitchen when the staff's votes were tallied and announced alongside those of the guests; but Gina de Venecia, who is out and out for Mar-Leni, took all this in stride, in true democratic fashion. It was indication that the year and three months of the much-publicized Senate Blue Ribbon committee hearings on Binay’s alleged corruption had hardly made a dent on the masa vote, which is clearly his.

Speaker JDV then asked all the guests to make their own analysis of how things are now, and among the factors brought up was how the snowballing disqualification (DQ) cases vs. survey front-runner Poe---her being a natural-born Filipino as well as the residency issue---would affect her candidacy adversely. And since the DQ would be battled in the Senate Electoral Tribunal, the Comelec and ultimately in the Supreme Court---and considering the turtle pace with which our court processes take place---it was opined that by the time the SC rules with finality on Poe’s candidacy, sources of funds would have dried up; the common opinion was that few financiers would subsidize a DQ high-risk candidate (I personally think she would be disqualified).

In addition, it was argued, Poe does not have a political party to back her up and organizing one would take time---thus, no group to tackle such nitty-gritty as who’ll hire jeepneys to take voters to the polls, distribute campaign funds and grease money, police polling precincts, watch the counting, etc., etc.

The interesting issue raised was who between Roxas and Binay would benefit most with the DQ of Poe. It was largely accepted that since Poe is perceived as clean and still uncorrupted, majority of her votes would probably go to Roxas who touts the “daang matuwid”---severely challenged though that slogan is. I opined that Mar would also be greatly helped by the P3.2 trillion 2016 "election budget" (if you believe critics' challenge before the SC that P474 million in lump sums are ensconced in the 2016 budget for the LP campaign).

Then there's the PCOS machines which, as resigned Comelec Commissioner Gus Lagman has noted, a small syndicate within the Comelec would manipulate to cheat for the administration. Few guests that night cared to disagree with the inevitability of PCOS manipulation; it was evident that PCOS credibility was at an all-time low in the De Venecia terrace last Tuesday night.
Posted by Veteran Journalist and Relentless Advocate of Truth at 11:58 PM