Reopening Mamasapano issue won’t amount to much, except to allow politicians to grandstand on eve of 2016---to the neglect of more pressing issues, e.g., threat of new cheating by PCOS machines, daily woes of Metro Manila commuters with horrendous traffic, floodings, bad transport system, etc. The whole truth about Mamasapano won’t emerge until there's regime/system change. But never mind, SAF heroes will forever be enshrined in hearts of Filipinos. 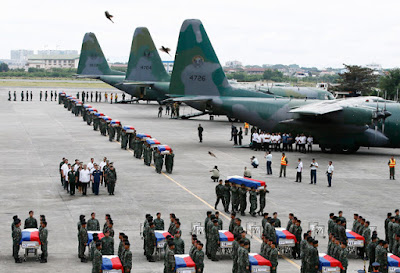 Two recent episodes are bound to have a direct bearing on the current situation in Muslim Mindanao, as well as on attempts over the months and even years to ensure lasting peace and order in the big island.

One is the startling disclosure by President Aquino, in a recent forum with Inquirer multi-media staff about an emerging “alternative truth” or an “alternative version of events” surrounding the slaying of Malaysian terrorist Zulkifli bin Hir, alias “Marwan”---and that “new leads” are being pursued about the Mamasapano tragedy.

The other episode involves the publication in various dailies last Monday, Sept. 14, of the equally startling "Manifesto of Retired Officers" on "Security, Justice and Peace in Mindanao for All!," signed by four former AFP Chiefs of Staff, one former Philippine Navy Flag Officer, and various chiefs of organizations and associations within the AFP and allied groups. All the signatories are of star rank, powerful and influential in their own time, but who, as retirees, still carry enormous weight among junior officers.

I cannot recall an issue that drew out such a large number of retired officers of general rank. This is unprecedented, and P-Noy was said to be very upset at their manifesto. Quite understandable.

What's interesting about these two episodes is that they are frightfully related to each other---a cause-and-effect relationship, instead of being just a mirror of each other. Because of new controversy regarding the bloodbath in Mamasapano and the generals' stiff objection to the BBL in its original form, there's an even chance that bill won't pass in this administration. Which is well and good.

Let's take these two developments one by one:

Regarding this "alternative truth," not surprisingly, the President did not disclose details about it, and in fact even Palace Communications Secretary Herminio Coloma Jr. has nothing to say about his boss' sudden disclosure, except “the need to get to the truth of the matter.” Justice Secretary Leila de Lima, normally very loquacious, quickly said that no details could be offered on the President’s assertion “as it's a sensitive matter” still being investigated.

The problem is that the Mamasapano episode, one of the goriest in our history, is still raw in the hearts and minds of our people, especially among the loved ones of the Fallen ’44. In addition to the 44 SAF who lost their lives, 5 other SAF were wounded with varying severity, and 15 others survived unscathed in that grim episode.

P-Noy’s disclosure (was it unpremeditated or deliberate?) about the “alternative truth” does not assuage the still raw feelings of the slain PNP commandoes’ loved ones---far from it. In fact, in this day and age when huge problems seem to overwhelm the nation, such seemingly idle utterance from the highest official does not help at all.

More so the re-opening of the issue in Congress, as some politicos are now pressing for. The fact is that there's no guarantee that the "real truth" would surface beyond what appears to be an attempt at REVISIONISM by the administration.

For lack of details about this “alternative truth,”  media are now speculating that P-Noy was referring to a new theory that Marwan was not killed by SAF commandoes last Jan. 25, but by his own aides who had turned traitor (for the  money of it?).  MILF chief negotiator Mohagher Iqbal, doubtless out of huge PIQUE with this administration for its continued failure to get Congress to pass the BBL, quickly took up this line---that it was not the SAF but Marwan’s aides who undertook the execution, and evidence was the way he was hit in the head and chest, i.e., while lying down, instead of in combat with the attackers.

This theory is, of course, not far-fetched, as money could easily have been motivation for treachery (the US bounty of P5 million?), but this is not substantiated. What Iqbal’s claim succeeds in doing, however, as Sen. Ralph Recto asserts, is to lessen the import of the SAF 44’s sacrifice of their lives.

As Recto put it, “The people may not be forgiving of those who vilify the valor of those who gave up their lives for the country. THEY WERE NOT GIVEN POSTHUMOUS HONOR, AND NOW THEY ARE BEING MADE TO SUFFER POSTHUMOUS INSULT." (emphasis BOC's).

The “alternative truth” plot has since thickened with the revelation in the Sept. 10, 2015 issue of the Los Angeles Times which asserted that contrary to Aquino’s claim that the Mamasapano operation was a success and a purely Filipino operation, it was actually "a failure" and was heavily participated in by American forces. David Maxwell, a retired US Army colonel said to have commanded the US special operations force in the Philippines in 2006 and 2007, was quoted by LA Times as claiming that in fact US covert forces had been training the SAF commandos to target Marwan in “Operation Exodus.”

The Daily Tribune here, quoting LA Times, said that on the day of the SAF assault on Marwan in Mamasapano last Jan. 25, “some five or six US counter-terrorism advisers assisted from a police command post nearby, tracking the assault team in live video from a US surveillance aircraft circling overhead.” The LA Times report also cited that after the 14-hour battle, a Black Hawk chopper flown by “Pentagon contractors” landed and US medics helped treat the wounded and collect the dead.

Actually we journalists had heard about American involvement in that episode from friends with connections to the US; but interestingly no such detail  appeared in any PNP report or was it raised in the hearings in Congress.

Sen. Tito Sotto is batting for reopening this issue in the Senate, while Sen. Grace Poe, who chairs the committee on public order and dangerous drugs that conducted the hearings on Mamasapano earlier, was quoted as being open to it. Naturally, as this would give Poe the exposure she needs for her higher political ambition.

P-Noy’s recent disclosure of this revisionist "alternative theory" has raised speculation that it was done to tease the public mind away from the terrible woes of daily living in Metro Manila and on the national level.

On the other hand, was the revisionism merely P-Noy’s strategy to prepare for his exit from office on June 30, 2016---when he has to account for his devastating mistake in assigning responsibility for Mamasapano to his close buddy, then suspended PNP Chief Alan Purisima?  Because of his controversial status then, Purisima deliberately failed to coordinate with the Army units on the ground---until all hell was already breaking loose!

The clamor of politicians, especially those who'll be running in 2016, to reopen Mamasapano is understandable, but the question is, would it do us any good as a people and a nation?  I submit that many fellow citizens would join me in refusing to support a reopening for a number of reasons.

One is the threat of grandstanding among re-electionist members of Congress. Two, there's no assurance that we'd really get to the bottom of THE TRUTH AND NOTHING BUT THE TRUTH from the LP-controlled Congress, e.g., about the President’s direct orders, US involvement, etc?  Recall how the senators and representatives tiptoed around the issue of foreign involvement---no one was brave enough to raise it---while the US Embassy was in constant denial about it.

Even now, there are reports about a gag order on PNP personnel on Mamasapano, causing demoralization in the ranks.

Three, reopening this emotional issue would side-step so many other issues far more urgent and important, e.g, the worsening poverty, the choked Metro Manila traffic situation that causes some P2.4 billion in losses daily, the PCOS cheating machines for 2016, global warming and the typhoons, etc.

There has been no closure on the Mamasapano issue because the entire truth has not been allowed to surface---and it will not, UNTIL A CHANGE OF REGIME AND SYSTEM TAKES PLACE. Already there's an increasingly loud call for a CARETAKER GOVERNMENT to take over from the paralyzed regime.

Meanwhile, the memory of the gallant SAF troopers will forever be enshrined in the hearts of the Filipino people---how they were led to their death by the incompetence and duplicity of a tiny band of conspirators.

(Next: the impact of retired AFP officers’ recent manifesto vs. BBL)
Posted by Veteran Journalist and Relentless Advocate of Truth at 8:30 AM