Citizen-petitioner Rizalito Yap David, instead of being vilified for challenging Grace Poe on citizenship issue, should be commended for seeking to uphold law and Constitution. This is something P-Noy wasn’t doing when he batted to submit this burning issue directly the people in 2016---vox populi---instead of to courts. But while lawyers cross swords, there are those of us who’d argue: what qualifications does Poe have, aside from being FPJ’s daughter? 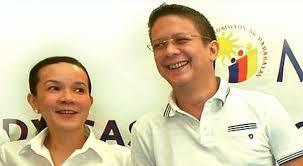 The Senate Electoral Tribunal (SET)---composed of three justices of the Supreme Court, namely, Senior Associate Justice Antonio Carpio who chairs the SET, and Justices Arturo Brion and Teresita Leonardo-de Castro, and six senators, namely, Tito Sotto, Bam Aquino, Cynthia Villar, Loren Legarda, Nancy Binay and Pia Cayetano---is handling very hot stuff--- the issue of the citizenship of Senator and presidential candidate Grace Poe, and her eligibility or lack of it for the 2016 elections.

Lawyers of Poe, led by Alexander Poblador, are tangling with Manuelito Luna,  lawyer of former senatorial candidate Rizalito Yap David, citizen-petitioner seeking the disqualification of Grace Poe.  Justice Carpio, has asked both counsels to submit their memoranda by the second week of October, just before the Oct. 16 deadline for the filing of candidacies for the 2016 elections; but this case is expected to drag on even beyond said deadline.

Thus, it’s conceivable that presidential candidate Grace Poe could be disqualified sometime in November, if not by SET then by the Supreme Court, to which this decision would predictably be elevated by constitutionalists and political foes.

The issue of Poe’s eligibility as a foundling to run for President is quite complex. For tangled herein are not only legal and constitutional issues based on provisions of the 1935 and 1987 Constitutions, but also the vast political ramifications of a Poe candidacy---the victory of what purports at the moment to be "opposition," or in case of her disqualification, the continuance of LP domination into the next administration.

This is because Poe cuts through the presidential candidacies of both LP’s Mar Roxas and UNA’s Jejomar Binay. With her “clean” well-scrubbed image she could drastically slice the chances of Roxas as the heir of “Tuwid na Daan.”  As the daughter of FPJ---and her “martyr” status now that she’s being raked over the coals on the citizenship issue--- Grace commands tremendous masa appeal, sympathy votes. This is evident in the recent SWS survey that she topped with a razor -thin margin. Thus she could eat into the 30 % masa vote claimed by Binay as ineluctably his.

The issue of Poe's citizenship is key battleground in the 2016 elections, and this is why anyone who questions this issue is cut down.  Note how issue-challenger Lito David is now being made to bear the burden of producing proof that Poe is not a natural-born Filipino citizen, instead of the other way around. Given the circumstances of her birth as well as inaccuracies she made, innocently or deliberately, in her Senate candidacy and Immigration records, I agree with David:  THIS ISSUE HAS TO BE RAISED AND ANSWER SOUGHT.

Justice Carpio aired similar thinking on it, opining that unless she produces proof otherwise, Grace Poe is not a natural-born but a naturalized citizen;  as such she’s not eligible to run for the presidency as stipulated in Sec.5, Art. 4 of the 1935 Constitution, which was left untouched in the 1987 Constitution. Carpio was criticized in some quarters for premature disclosure of opinion as SET chair (and doubtless this is justified), but inevitably his supposed link to Mar Roxas’ lawyer, Avelino Cruz, in “The Firm” is raked up too, even though at least on paper he severed ties when he was appointed to the High Court early in the Arroyo administration.

A senator allied with the P-Noy administration has called for Carpio's inhibition from SET deliberations and voting on Poe. It’s not being mentioned in media, however, that Justices Brion and De castro also opined similarly on this issue, but this may be because they have no ties with “The Firm.” Therefore, not politically interesting.

Grace Poe has sought a DNA test, results in two weeks, obviously in the hope that one or other of her biological parents or siblings would surface as being Filipinos, thus quieting all debate on this issue (a foundling, to be considered natural-born, must have at least one parent born here). On the other hand, lawyers of both sides of her eligibility issue would tangle more assiduously in the SET and predictably in the Supreme Court.

President Aquino has also weighed in by opining that Poe’s citizenship issue be left to the people to decide in the coming elections---vox populi. This stand, however, is quite strange for him to take, for as the President he should be the first one to bat for following the Constitution to the letter and upholding the majesty of the law.

As a result, P-Noy’s stand about vox populi and his kid-glove handling of Poe, as compared to his full-fist slamming of Binay, raises speculation in some quarters that P-Noy may be sensing an inevitable Poe victory and wants to ride on it, in the hope that he gets better political treatment in his retirement.

This may be no idle speculation, for recall that Grace Poe, as chair of the Senate committee on peace and order and dangerous drugs that held many hearings on Mamasapano, ultimately softened her earlier tough stand to pin responsibility for the bloodbath on P-Noy.  Then too, a week and a half ago, she promised not to take issue with this administration at all during the campaign. What kind of 'opposition' is this?

I’ll let lawyers Alex Poblador and Manuelito Luna joust healthily on the citizenship issue of foundling Grace Poe; instead, I’d emphasize a far bigger issue that will have such a staggering bearing on our country:  her lack of competence to lead the country presently mired in so many gargantuan problems. There’s no doubt that Poe's running on the steam of her popular idol father FPJ’s memory, and well could she ride into victory in May 2016.  But the nagging question is: what qualifications does she have to show aside from being her father’s daughter?  Being president is no joke especially in the aftermath of the Aquino administration.

Poe's stint at executive governance was only a year at MTRCB, and in the Senate she had only two rather uneventful years,  except when she chaired the committee that investigated the SAF tragedy, which thrust her into the limelight. Former Sen. Nene Pimentel, in today’s Daily Tribune, was quoted as opining that the platform revealed by Poe at her UP launch the other week sounded “like a ‘thesis’ paper” and that her speech then was similar to an academic exercise that lacks “political weight.”

Star columnist Boo Chanco has expressed worry about something else. In a FaceBook post Boo opined that Poe’s running-mate, Sen. Francis “Chiz” Escudero, has failed to display a deep grasp of the country’s  many serious problems and that  he’s no better than a “charlatan” (probably because the Bicolano solon speaks with the rapidity of a canon).

Such studied opinion from a veteran journalist is worrisome indeed, for it’s well known in the Senate that Grace Poe leans so much on her buddy Chiz, who was her father’s campaign manager in his 2004 presidential run. In fact, some Senate insiders assert that there’s nothing that she would agree to issuing, even just a press release, without first asking, “Nakita na ba ito ni Chiz?”

Thus, it’s not remote that in the first few years of a Grace Poe presidency, while she’s learning the ropes it would be Escudero who would be de facto president.

It’s high time that Escudero’s record be scrutinized, alongside that of Grace.
Posted by Veteran Journalist and Relentless Advocate of Truth at 11:01 PM