Implications of the INC family feud on the political scene (on the eve of crucial presidential elections in May 2016). Seven UP professors from various disciplines render their pre-SONA assessments in the best Center for People Empowerment in Governance (CENPEG) tradition. 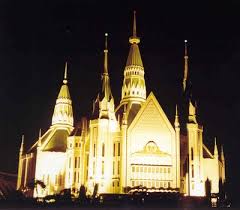 The Iglesia ni Cristo (INC) family feud has for several days now hogged prime-time TV and the front pages of newspapers. After all this is the first time that a huge crack has appeared on the monolithic dome of this politically powerful religious group since its foundation by Supremo Felix Manalo in 1914. Pitted against current Executive Minister Eduardo Manalo, the third generation of the ruling family, is his mother and the widow of the late Ka Erdie Manalo, Tenny Manalo, his younger brother Angel Manalo, other unnamed siblings and about ten ministers, who  have decried what they termed the prevailing corruption within the powerful church and their alleged “kidnapping.”

In retaliation, Ka Eduardo, on the advice of his top senior ministers, expelled the rebel group from the church. But understandably, what’s said to upset church members somewhat caught in the middle of this mighty feud is the way Ka Eduardo treated his mother. Filipino culture being what it is, such behavior is tough to reckon with---a study in sociological realism.

It is hard to tell how deep the schism is at this unprecedented stage, but what makes it so compelling is that it’s happening not only during the grand 101st anniversary of the INC, but also on the eve of crucial presidential elections in May 2016, where President Aquino seems to be staking his all on his anointed candidate in the hope that he would escape political prosecution.

The INC is so powerful because of its command vote in every election, from the highest post down to the grassroots. Politicians high and low have courted its crucial support each time and in return they have quietly reciprocated with favors---primarily with the appointment of INC members to various posts in the judiciary, the armed forces and the police, as well as in top-level bureaucracy.
Now that the veil over its monolithic strength has been rent and cracks have appeared on the dome, would this solid vote command the same intensity?
Would the INC remain the king-maker that it has been?

Note reports that the recent appointment of the PNP Chief is allegedly owed to the INK. Noteworthy watching, therefore, is how the investigation of the alleged kidnapping of a group of ministers will be handled by the NBI, following the recent order of DOJ Secretary Leila de Lima. It was interesting that the day after the INC crisis broke out, the chief of police of Quezon City was already alleging  that there was no abduction of anyone. Interesting too, was Angel Manalo’s denial of detention---some media attributing it to duress.

It's understandable that Ka Tuning Taberna and Kumbanchero Jerry Baja won't comment about the INC crisis. But note that no politician has been caught commenting on it---their lips are tightly sealed, but  they’re all watching developments with beagle eyes. This is really just abangan. 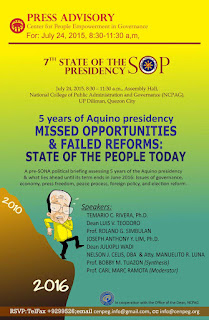 Every year on the eve of the President’s SONA for the past seven years, the Center for People Empowerment in Governance (CENPEG), composed of leading faculty members of UP in various disciplines, invites media and other parties to the UP National College of Public Administration & Governance in Diliman, to listen to key professors’ annual assessment of the “State of the Presidency” for the year past.

I have studiously followed these assessment sessions of CENPEG every year and found them very interesting and informative. In earlier years of President Aquino’s administration it was evident that even the normally acerbic and critical UP profs were giving him the benefit of the doubt on governance, but last Friday’s assessment by the  seven professors was darker than ever before and quite pessimistic. Their papers’ over-all title and theme, “Five years of the Aquino Presidency, Missed Opportunities & Failed Reforms: State of the People Today,” said it all.

Dr. Temario C. Rivera, former professor and chair of the UP Political Science Dept.  who taught for ten years at Tokyo’s International Christian University, in his paper, “Missed Opportunities and Failed Reforms: Five Years of the Aquino Presidency,” lamented how it has wasted its “initial favorable political capital, failing to translate this political asset into a movement for sustainable reforms in governance.” Rivera attributed the “generally non-inclusive character of the socio-economic and political outcomes” of the Aquino administration to l). a dysfunctional presidential leadership style, 2). the unresolved institutional and organizational obstacles for reform in PH, and 3).weak responses to the major crises that beset the administration.”

Rivera decried that P-Noy’s propensity to remain loyal and protective of “special friends and corrupt and incompetent political allies has clearly become an impediment to any reform agenda, particularly its anti-corruption campaign.” But equally, he stressed the administration’s failure to, among other things, install “more effective accountability mechanisms” in Yolanda, the SC declaration of PDAF and DAP as unconstitutional, the high-profile corruption cases, the Comelec-Smartmatic deal, the Mamasapano disaster, etc. He also decried the systemic corruption, undermined by P-Noy’s “ ‘selective justice’ in filing of cases, the lack of a Freedom of Information (FOI) law and the slowness and corruption of the judicial system.”

Prof. Joseph Anthony Lim of the Economics Dept. of the Ateneo University and a retired professor at he UP School of Economics, who trained at the Massachussetts Institute of Technology and Univ. of Pennsylvania, pointed ou in his paper titled “The State of the Economy: Did P-Noy Deliver to His Bosses,” that the GDP growth in the first three years of P-Noy (2011-2014) were higher than that of the GMA years (2002-2008). This was despite lower growth in exports and OFW inflows. This phenomenon was due, said Lim, to higher business and foreign confidence (investment upgrades from Moody’sm, Fitch, S&P’s) and higher government constructing and spending (DAP).

But the “big shock” came in the 1st quarter of 2015 which saw GDP growth slow down to 5.2%, compared to actual growth in previous quarters of 2014 and market expectation of 6.6%; interestingly, the GNP growth for the 1st Q 2015 was even lower: 4.7%. Government explanation was low exports due to bad world conditions and low public investments, but Prof. Lim poses a prevailing query: “Can it be due to a fall in confidence?”

In the Global Competitive Report of the World Economic Forum, Dr. Lim cited improved PH’s over-all ranking from 2011-2014 from 85 to 52,  in governance from 117 to 67, and in ethics and corruption, from 135 to 81. But he also noted that it also showed “bad results” in “bad infrastructure,” where PH is stuck at rank 91, airport infrastructure at 108 and seaport infrastructure at 101, and peace and order, security situation at 89,  and threat of terrorism on businesses at 110.

Decrying that P-Noy’s growth is highly sensitive to confidence, Lim asserted that the first Q of 2014 turned up unexpectedly low compared to market expectations, which was blamed on lack of government spending and confidence, e.g., destruction by Yolanda and perhaps government bungling. His conclusion: “that constructive government investments and expenditures go hand-in-hand with confidence –driven growth, but confidence cannot be based just on the personality of the President, as this will soon be eroded and cannot be sustained.”