Euphoria over 'independent' judgment of BOI and Senate reports turns to confusion over “passive voice” of conclusion that encourages flexibility of interpretation, vs.“active voice” that would directly pinpoint P-Noy. But there's one unarguable fact: P-Noy recruited suspended Purisima who couldn't coordinate with AFP. Recalling how, in a delicate rescue operation in Basilan 12 years ago on kidnapped US bible translator, VP Erap earned pogi points for yielding to military professionals, instead of playing politician-general, like P-Noy in Mamasapano.

As it turned out, use of the passive voice proved ominous as it gave room to FLEXIBILITY and DOUBLE-TALK. Both Poe and PNP CIDG Chief Benjamin Magalong who headed the BOI stressed subsequently that while the chain of command was indeed broken, the President could not be faulted because he is OUTSIDE the chain of command, which only begins with the Chief PNP down.  Poe mused on this idea in a TV interview, asserting that her report could change if the President has “new revelations” about the failed SAF operation;  whereas Magalong worked along this line after answering the summons of P-Noy to Malacanang last Tuesday.

This turnabout, which both officials denied as such, saddened legions of Filipinos who thought that for once, there were two people who stood their ground against the immense power-play of the Palace.

To digress, it was brazen defiance of, at the very least, good sense and simple propriety by the President to openly summon Magalong after the BOI report came out with conclusions that “hurt” him.  The Palace says that what reaped P-Noy’s ire was that he never got to air his side on the operation, as DILG Secretary Mar Roxas, to whom the BOI had relayed its request to query P-Noy, forgot in the hustle and bustle of the day’s job to deliver that message to his boss.

This BOI report was the hot topic for many days and Roxas would forget to deliver the request to the lead in the dramatis personae! Ginawa na namang sangkalan at tanga si Mar.  But why does Mar tolerate all this?

Rejoicing over the straightforwardness of the two reports turned to confusion as the concept of the President outside the PNP chain of command became too twisted to comprehend. Both Poe and Magalong were echoing Justice Secretary Leila de Lima who even called former President Ramos “a confused man” for asserting that the chain of command is alive and kicking in the PNP. FVR at a press con reminded De Lima of EO 226 that he issued in February 1995 that sought to institutionalize the doctrine of “Command Responsibility” in all government offices, particularly at all levels of command of the PNP and other law-enforcement agencies.” EO 226 has not been erased from statute books.

Lawyer Jose Oliveros, whom I quoted above, reminds De Lima that on at least two occasions, Aquino had referred to himself as the “Commander-in-Chief of the PNP”:  the 2013 graduation rites of the Philippine National Police Academy on March 22, 2013, and just last Feb. 6, 2015, in his address to the nation following the SAF Mamasapano massacre, when he asserted that “As  President and Commander-in-Chief I am fully responsible for any result, any triumph, any suffering and any tragedy that may result from our desire for lasting peace and security.”

Actually P-Noy does not seem to have difficulty accepting his role as PNP Commander-in-Chief, it’s the fawning DOJ Secretary Leila de Lima who,  in her eagerness to save her boss from liabilities in his post-term, now resorts to convoluted arguments that are destroying time-honored principles on which this nation has lived and thrived.

Ultimately, the debate over whether P-Noy is in or out of the chain of command  becomes secondary, for it still does not erase one central fact that was the ROOT CAUSE of the tragic failure of the SAF operation that claimed the lives of 66 Filipinos. This is that P-Noy authorized former PNP Chief Alan Purisima to plan and execute it, when he should have been in the dog-house serving six-months suspension by the Ombudsman beginning Dec. 4, 2014 for graft and corruption.  Just why P-Noy involved only Purisima and Napenas, bypassing PNP OIC Leonardo Espina, remains a big mystery up to now, but ironically, it’s now Purisima whom Leila is going to investigate for “usurpation of jurisdiction.”

But at least Grace Poe recognized the malady of authorizing a suspended official to carry out a mission. Said she after her Senate report came out: “If you are a suspended PNP Chief, you cannot let your people know that you are actually engaged in the situation. So here are lots of things that you can leave out. You can’t really be focused on what you’re supposed to do. And that’s why the tragedy happened, he was in Nueva Ecija texting (while the SAF operation was on-going).”

The tragedy of Mamasapano also boils down to the folly of politicians who want to play general--- when such a delicate and complex operation should be left to the professionals once the decision button is pushed for Go.

FVR soon after the SAF tragedy asserted that instead of the text-game that went on between three people only, P-Noy should have called a full-blown command  conference of the PNP and AFP top commands, to tackle the decision to get Marwan.

And in a personal way I can appreciate the merits of Ramos' assertion. Allow me to go into some reminiscing.

In the third quarter of 1993 American bible translator Charles Walton was kidnapped in Basilan by what was believed to be Abu Sayyaf elements, and it was a big international issue. My husband was then commander of all Mindanao (at that time Southern Command was one central command, unlike now that it’s divided into Eastern and Western Command);  he was tasked by President Ramos to carry out the rescue mission that was undertaken by the AFP in coordination with the PNP and select civilian elements in Mindanao. 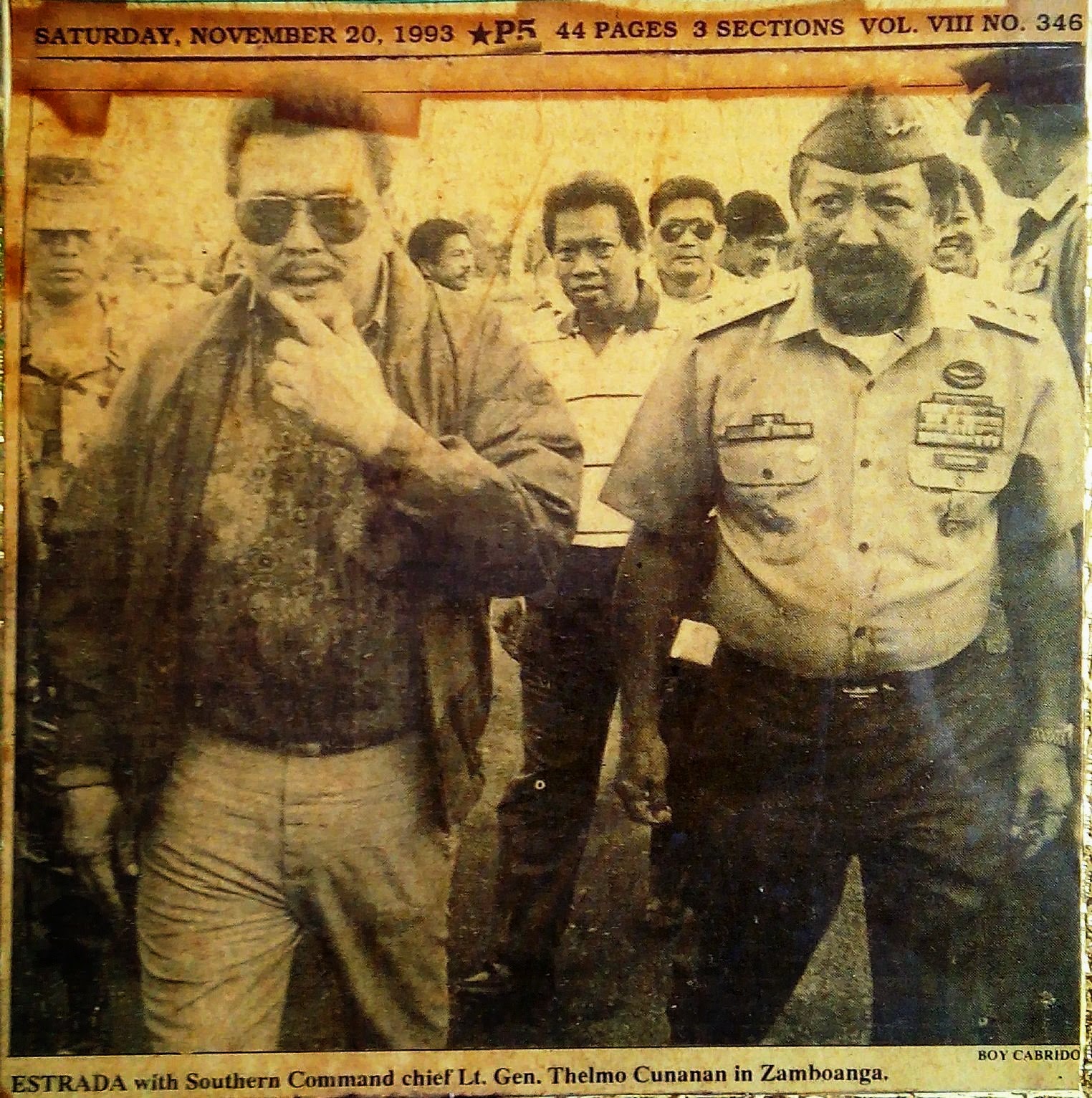 At the end of October Vice President Joseph Estrada descended on Zamboanga City where SouthCom was based, a big media retinue in tow, and in his capacity as Anti-Crime Czar he wanted to be in the thick of things. In fact he wanted to go to Basilan asap. My husband politely refused to allow him to go there, as it could jeopardize very delicate operations. Cunanan told him that if he wanted a briefing, he could give him one every hour, if necessary, but Basilan was off-limits at the moment.

To Erap’s credit he was obedient and he stayed at  Zamboanga’s plush Orchid Garden Hotel, nightly holding court with media over his favorite Blue Label Scotch  (flown from Manila with him), joined in from time to time by SouthCom officials.

Then one day everything was ready. By mid-morning of Nov. 14, the VP, DILG Secretary Raffy Alunan, Gen. Cunanan and other high officials got into a small plane that Erap was using, while media, (including this blogger, then a columnist of Inquirer) and lower-ranking officials loaded into a propeller Army plane. Before take-off, a young fellow in civvies came up our plane to tell me that the Veep wanted me to ride in his plane, but I chose to stay with media colleagues. This messenger was the future Sen. Panfilo Lacson, then aide of Estrada.

In the thick forest fastness of Basilan, the VIP party from Zamboanga occupied a clearing with a sort of picnic hut where we sat all day, awaiting Walton. Things at that point were very iffy and tension ran high as sunlight began to ebb---how often the twilight proves inhospitable to such undertakings.  Erap’s group tried small talk. I came to know later that my husband had assigned security to handle the VIPs in case trouble erupted. His youthful aide-de-camp, a PMA graduate, was tasked to push me into a ditch just in case…I had no idea how he took care of Erap and Alunan.

Then, as dark was beginning to envelop us, there was a faint shuffle in the forest and out came a frightfully emaciated Walton, surrounded by swarthy men with kerchiefs tied around their heads and long guns. Erap and Alunan stood up to receive him and we were then quickly hustled out and brought to the 4th Marine Brigade in Basilan, to spend the night there. I took as a cue the importance of Walton’s rescue in the number of Caucasians at the dinner table, whom Erap regaled, his eyes twinkling naughtily,  with, among other things, how powerful the turtle eggs on the table were as aphrodisiac.

Prior to getting to the camp, the party stopped downtown and Walton called up Philadelphia and he was just smothered with sobs as he spoke with his wife across the world.  Gen. Cunanan then called up President FVR to report mission accomplished. The next day we were aboard a military plane to Manila, where Estrada presented Walton to FVR in Malacanang.  By leaving things to the professionals Erap earned his pogi points in media---landing on the front pages as he emerged from the Basilan fastness. And Walton was safe.
Posted by Veteran Journalist and Relentless Advocate of Truth at 3:19 PM