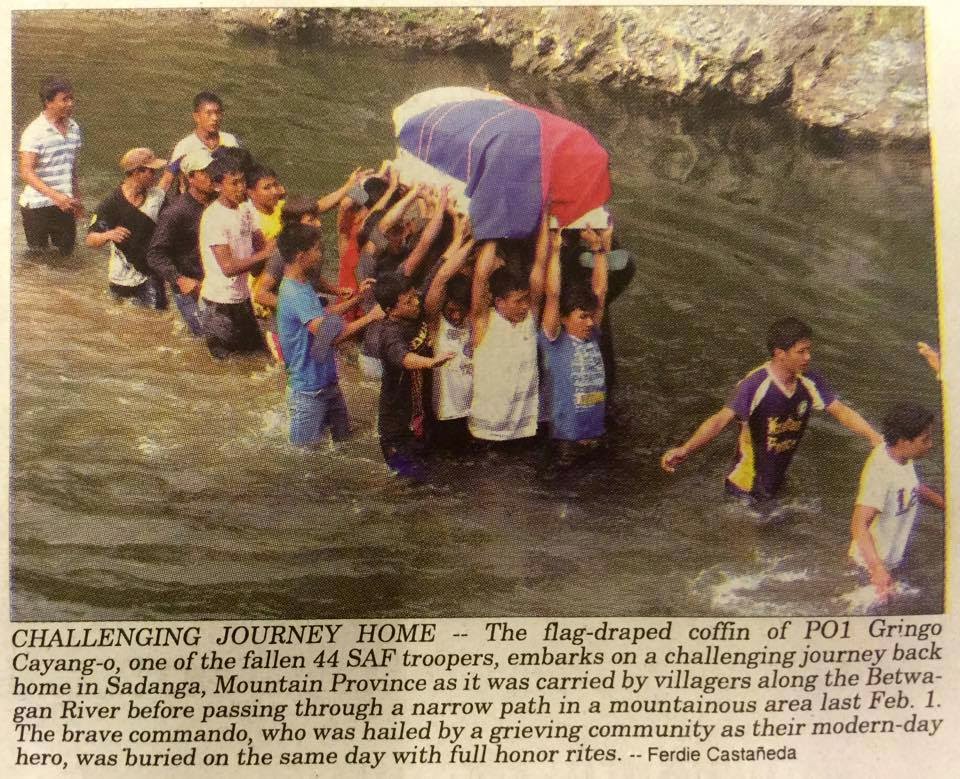 Poor relieved PNP SAF Chief Getulio Napenas.  He was not only fired right after the botched Mamasapano operation, but now, clearly Palace and Senate conspirators have made him the fall guy for the President.

At this morning’s hearing of the Senate committee on public order and dangerous drugs chaired by Sen. Grace Poe,  Napenas, PMA class ’82, admitted that he was receiving “advice,” not ‘‘orders,’  from suspended (now resigned ) PNP Chief Alan Purisima regarding the SAF operation and that it was a “judgment call” on his part to accept the latter’s series  of “advice.”  Among such “advice” from Purisima was for Napenas not to tell DILG Secretary Mar Roxas, who has direct supervision over the PNP and Napenas’ immediate superior, PNP OIC Leonardo Espina, about the coming operation, and that he’d “take care of (AFP Chief Gregorio) Catapang.”

No one among the senators, however,  questioned Napenas what  he thought of  Purisima’s black-out  order vs. Roxas, Espina and Catapang, which the suspended Chief had skillfully convinced Aquino to agree to. For one thing, it shows how close Purisima and P-Noy are and the former’s convincing power over the latter. But lock-out could also be a matter of professional jealousy on the PNP’s part vis-à-vis the Armed Forces. Recall that the PNP has sunk quite low with the graft and corruption charges against Purisima and various scandals associated with him.  Bagging an international terrorist like Marwan could elevate the PNP’s esteem notches higher.

But why keep out Espina? Was it a matter of personal  and professional jealousy with Purisima?

The senators were too polite about crucial issues that go into the heart of the Mamasapano controversy, and many of them were only too eager to pin down Napenas and his 30 years of service to the PNP, and to  protect Purisima--- because by protecting the latter they protect P-Noy.   I missed Joker Arroyo this morning---had he been around he would have pursued the commander-in-chief and chain of command principles to their fearless and excruciating end (that’s how he maneuvered to put Defense Chief Juan Ponce Enrile to pasture), thus putting P-Noy on the carpet.

The black-out of Catapang and the AFP exacted a heavy toll on the PNP in terms of precious elite troopers’ lives lost, and for years to come the Mamasapano fiasco would haunt it.

Napenas virtually admitted that he acted on his own “within the window of opportunity” open to SAF to operate in Mamasapano from Jan. 23-26 (advising the AFP just on “time-on-target”), and that he seized it. It was evident that he's now accepting his role as fall guy for P-Noy and Purisima, the Palace tandem which gave the go-signal for the botched operation.

By contrast with Napenas’ meek and submissive behavior, one could sense the seething anger of PNP OIC Leonardo Espina, who was kept out of the loop, over the senseless death of 44 of his men and the “barbaric and brutal” manner they  were  executed in Mamasapano.

The PNP is far from whole and cohesive  as an organization and it will take a long while to heal its wounds of division and fragmentation.  A crucial choice would be whom the President will install as PNP Chief (the straight-talking Espina, who’s not Purisima’s favorite general, is retiring this June).  That new chief had better be a healing leader.

This is a serious charge and it presents a very sad predicament for the two state organizations defending our security against internal and external forces.  The rift could be capitalized upon by enemies of the state.

Sincere efforts to dissect the problem within the two organizations should not be too difficult, as many officers of both are PMA classmates and contemporaries.

Nowhere in the three-hour Senate hearing did anyone of the senators dare raise the question of whether P-Noy gave the order to the SAF Chief to attack the MILF/BIFF lair to get Marwan. That P-Noy gave that order is a fact that anyone with minimum intelligence would conclude not only from the organizational set-up of the PNP but also from the testimonies---especially since Gen. Napenas already admitted having kept PNP OIC Espina and DILG Secretary Roxas in the dark regarding the Mamasapano operation.

Poor  Napenas was boxed in indeed, but it was evident that Purisima’s hold over him came from the suspended Chief’s all too obvious closeness to P-Noy. As the fired SAF Chief testified, he and his subordinates were taken by Purisima to several meetings with P-Noy, one of them in the firing range of the Palace grounds last Nov. 30, 2014 and another in Bahay Pangarap, to discuss the coming operation.

For Napenas, an order from Purisima was an order from P-Noy.  No matter the attempt to  obfuscate the issue,  this fact is clear to the Filipino people.

The House of Representatives was correct in shelving deliberations of the Bangsamoro Basic Law (BBL) for indefinite (congrats to the chair of the ad hoc committee on the BBL, Cagayan de Oro Rep. Rufus Rodriguez for his political sensitivity).  The way the people feel so outraged and emotional over the tragic death of the 44 SAF ---in fact, a political pundit observed that the Filipino people now are far more outraged over the Fallen 44 than over the slaying of Ninoy Aquino in 1983---there is no way they would agree to passing the BBL now; and politicians can only ignore their sentiment at their peril.

Posted by Veteran Journalist and Relentless Advocate of Truth at 9:44 PM