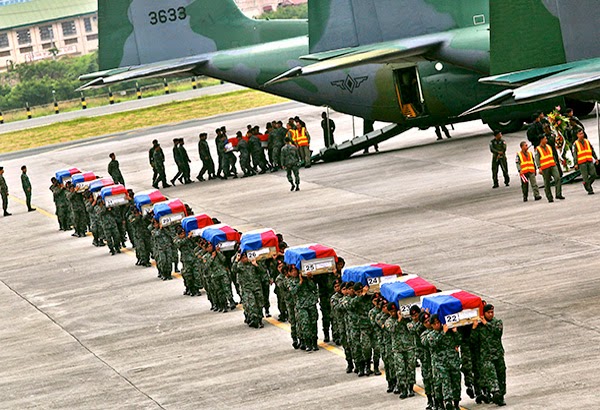 As a journalist of over 30 years’ standing I have taught myself to be “hard-boiled” about many things,  but I found myself weeping shamelessly while reading the homily delivered by Fr. Ranhilio Callangan Aquino, Dean of the Graduate School of Law of San Beda College, at the mass celebrated at the school last Saturday, Jan. 31. Fr. Aquino’s homily, which was reproduced in his column, “Pensees,” in Manila Standard Today, spoke, like most of us these days, of the horrible death of 44 SAF commandoes at the hands of the MILF and its supposed splinter group, the Bangsamoro Islamic Freedom Fighters (bIFF). But what seared my feelings was a portion of Fr. Rannie’s homily that spoke about his former student, a former seminarian at the San Pablo Seminary who eventually became a PNP Special Action Force (SAF) commando, and who survived the recent mass slaughter in Mamasapano.

Fr. Rannie was not able to talk to his former student but he heard his testimony over ANC as the SAF commando recounted the last desperate moments of his fallen comrades. As Fr. Rannie rightly put it, “Only a hopelessly callous person will not be moved by (the SAF survivor’s) narration of the final moments of his comrades. Some of them asked him to convey to their loved ones their final messages. One asked him to assist him in accessing the pictures stored in his cell-phone so that as his eyes closed in death, they would be gazing for one last time on his loved ones.”

Fr. Rannie also narrated the story of his former seminarian-turned SAF’s escape from hell-fire, “which is itself a story of the gallantry of a comrade.” As he wrote in his column, the SAF survivor’s fellow soldier “knew that the injury he had sustained was mortal, and so he urged my former student: Run and I will take fire for you to divert their attention from you. And as this gallant policeman stood, he was fired on, but he advanced towards his assailants so that his comrade could make his escape. A second volley of fire finally felled (the brave SAF commando savior) but my former student was by then on the road to safety.”

The story of the love of dying SAF personnel for their families and concern for their comrades' escape is so touching to a mother and grandmother like this blogger, and so are the stories of heroism, such as the bravery of the SAF commando who though mortally hurt could still think of covering for his colleague so that the latter could escape. As a Filipino I revel in these stories especially at this time when our nation reels from the depletion of our self-respect over the sheer incompetence of our leaders and confusion over our values and goals as a people.

The question that comes to mind about these accounts of love, heroism, bravery and self-sacrifice  is: If we have such noble virtues in our race as displayed by our fallen SAF commandoes, how come we have arrived at  such horrible contradictions such as what transpired last Jan. 25 in a remote corner of Maguindanao---that reeked of greed, deception, ambition and incompetence?

There is pressure from those involved in the peace process for Congress to pass the Bangsamoro Basic Law (BBL) and sign in Malaysia the decommissioning pact between the Philippine Republic and the MILF. The argument is that these acts would be the best way to honor the memory of the Fallen 44, our new heroes. This is pure crap and BS, for there is enormous national grief over what had happened in Mamasapano, and the families of the dead SAF commandoes are still in a state of shock and grief. They would not understand accommodating so soon those who harmed the gallant best of SAF.

As columnist Dr. Antonio J. Montalvan II correctly put it, to rush the BBL now is "to kill the prospects for truth and justice for the fallen 44. A people betrayed have lost their dignity because betrayal is an affront to dignity. That dignity must first be restored in the only way possible---accountability. The question to ask is no longer why, but who."

I must hasten to add here that accountability must be rendered by a truly credible and independent board of inquiry or truth commission---not composed solely of PNP generals who could be beholden to the President who bears the greatest accountability in this painful episode in our history. Only the verdict of a credible and independent board would be acceptable to the Filipino people.

Here's an interesting letter from a reader of this blog, raising a lot of points:

"The SAF 44 is like the 300 of Sparta, their bravery sparked a United Greece against a Persian Invasion.

"The events of January 25, 2015 in Maguindanao is much like the terrorist acts foisted in the US on September 11, 2001---later to be known in history as 9-11, which  galvanized the world against Islamic Fundamentalist terror. The events of 1-25 would have the same effect for the Philippines. By the way, it's interesting that September 11 marks the birthday of Ferdinand Marcos while January 25 is the birthday of Cory Aquino.

"Did the entry of SAF in the area find a bigger force more important than the $5 million bounty, like the ISIS leadership in country?"

Posted by Veteran Journalist and Relentless Advocate of Truth at 11:55 PM