Social Watch's Prof. Briones asserts that of P2.66T budget submitted to House by Palace, only P1.739T is covered by GAA. The rest are “Automatic Appropriations” that can’t be scrutinized by Congress, among them the Special Purpose Fund and savings to be snatched from executive agencies at mid-year or even quarterly. Leaders of Congress close ranks on need to pass new law re-defining 'savings,' in defiance of SC ruling. 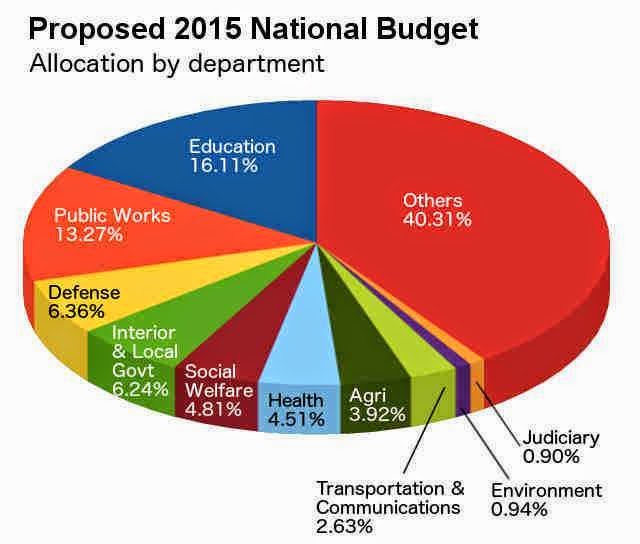 Former National Treasurer and professor emeritus of the UP College of Public Administration Leonor Briones has been analyzing the DAP and moves by the Aquino administration and the House of Representatives to resurrect it through what’s now termed as the “DAP Clone.” As cited in Daily Tribune, Briones asserts that of P2.66 trillion budget submitted by the Palace to the House, in reality only P1.739 trillion is covered by the General Appropriations Act (GAA), as seen in the pie chart above. The rest, falling under "Others," are those termed “Automatic Appropriations”---lump sums that CANNOT BE SCRUTINIZED by Congress and held by President Aquino.

As political commentator Ado Paglinawan wise-cracked, "Anyone heard of the "Department of Others?"

Briones breaks down these “can’t-be-scrutinized” lump sums into the President’s Special Purpose Fund, P378,603 billion; Unprogrammed Expenditures, P123,056 billion; the Internal Revenue Allotment P389. 860 billion; and interest payments (debt servicing) P372,863 billion. Briones points out that these lump sums do not even include the Malampaya Fund which is automatically appropriated, and “Off-Budget Funds” such as the Motor Vehicles’ Users’ Charge and those coming from Pagcor which are quite big.

But instead of answering Briones' assertions abut these mind-boggling amounts above, Deputy Press Secretary Abigail Valte goes  into a spin about P-Noy being very trustworthy with funds, thank you. Never mind if Finance Secretary Cesar Purisima and DBM Secretary Butch Abad recently admitted that the P130 billion left of the Malampaya Funds are now gone and they can't seem to offer adequate explanation for it.

Abigail Valte  also assails Liling Briones with ad hominem charges, e.g., that the latter served as National Treasurer under President Joseph Estrada, and Valte insinuates about what this means, which is very hawa. The citizens want an accounting of the gargantuan funds spent by the P-Noy administration over the past four years, especially the now unconstitutional DAP, but nothing much has come out of the DBM except to say that many recipients have not been cooperative.

But this is not all. As I wrote earlier, the Palace is hot on cornering savings in the GAA even during the mid-year, and in fact, a rabid P-Noy representative wants to authorize the Palace to snatch those savings from various executive agencies even after EVERY QUARTER---despite SC ruling that savings cannot be availed of except at the end of each year.

The DBM hopes to raise some P251.78 billion in estimated savings for 2014---quite a whopping sum---which critics assert will be GREATER than the actual amount spent for the 116 projects funded by DAP from 2012 to 2013.

Moreover---and this takes the cake---it appears that as per House Resolution 1284 filed last month, implementing rules of the “Grassroots Participatory Budgeting Process” (GBP), formerly referred to as the “Bottom-up Budgeting,” gives LGUs the ability to CANCEL AND REPLACE certain programs and projects. As Kabataan Rep. Terry Ridon (who was a student regent in the UP Board of Regents before he ran for the House) put it, this authority is characteristically similar to that of DAP and shows the political vulnerability of these programs and projects.

Thus, as a Tribune story cites a Budget memo,  “If a project (under GPB) is deemed not feasible for implementation after validation of the concerned participating agency, the project may be REPLACED  with another project that can be implemented by the same participating agency in the same city of municipality.”

The danger there is that such authority could be abused to cripple a non-LP rival at the local level, by castrating critical agencies from his or her domain.

Apparently both chambers of Congress, in the tight control of the President, are pushing hard to make unlimited funds available to P-Noy, so that he could distribute them to his allies in time for the elections in 2016.  LP allies, including Sen. Grace Poe, are now all singing the same tune regarding the hijacking of “savings” from executive agencies and placing these at the Palace’s disposal---under the argument that the Supreme Court ruled against the Palace, BUT NOT AGAINST CONGRESS, so the latter could go ahead with a new ruling.

Sen. Grace Poe was quoted in Tribune as emphasizing, “The Constitution merely mentions savings, but failed to give it an exact definition,” which drew a fast chorus from Sen. Bam Aquino. For those who are looking up to Grace Poe as a possible shining star of hope for reform, her stand on  DAP/savings is troubling, to say the least.

Senate President Franklin Drilon, who “lawyered” for the Cabinet members when they appeared before the Senate Blue Ribbon Committee over two weeks ago, argues that “Congress has the prerogative to review and revise the definition of savings for the SC interpretation.” He then asserts that Congress will legalize DAP under the GAA through a joint resolution and/or a supplemental budget ASAP---not for the purpose of replacing DAP, but for on-going DAP-funded projects affected by the SC ruling, so as to avoid budget lapse.”

Drilon also stressed the need to avoid going through long bidding process---but this could worry his province-mates in Iloilo where about P740 million in DAP funds were sunk into his projects.

It seems like open-sesame to DAP clones and other forms of funding for the LP-controlled Congress, and the tenor of P-Noy's allies is unmistakably arrogant and defiant of the High Court’s ruling against “savings” grabbed way ahead of year-end. It also shows insensitivity to the overwhelming public sentiment against the many DAP billions invested in projects of P-Noy’s political allies.

Just how much the DAP has done to alleviate poverty and lack of economic growth can be seen from troubling statistics culled from a recent paper read at the CenPeg Forum at UP-NCPAG by Prof. Jose Enrique Africa, as part of its "Alternate SONA." Consider these troubling facts cited by Prof. Africa: 11.8 million unemployed or under-employed, 66 million poor at P125 or less a day earning, poverty growing, manufacturing and agricultural decline, record joblessness and a backward economy.

The public just has to continue registering its protest to DAP and its clones, by lending support to the small but noisy House Minority valiantly trying to stem the dam-break in Congress, and a militant citizens’ group called the People’s Initiative Against the Pork Barrel.

Posted by Veteran Journalist and Relentless Advocate of Truth at 9:09 PM