Janet Napoles’ much-awaited affidavit is, to quote lawyer Levito Baligod, “mostly truthful and partially false,” with leading allies of P-Noy missing from list. With confusion and agitation all around as solons deny, deny, which entity can be entrusted to conduct impartial, truthful investigations? A National Transformational Council with prominent non-partisan leaders is bruited about, but without FOI Law how far can it get in digging for truth? 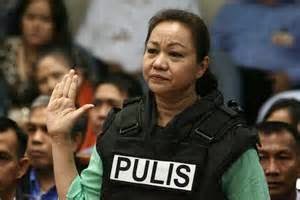 Many people’s fears came true the other day when Janet Napoles’ much-awaited ‘expanded’ true confessions affidavit---issued 26 days after she met in a five hour 'tell-all' session with Justice Secretary Leila de Lima in her hospital room at the Ospital ng Makati, where she had just undergone a uterine operation---was submitted to the Senate Blue Ribbon Committee. This blogger, commenting on the marathon session's poor timing, had feared that this infamous patient would still not be in control of what she was revealing as she would still be under sedation then.

True enough, Napoles admitted that her scam list of 20 senators and about 100 representatives was “what I could remember in my present condition at Ospital ng Makati.”  It would seem that Secretary De Lima did part of the remembering---or forgetting---for her.

Napoles’ affidavit was, as Atty. Levito Baligod, original lawyer of whistle-blower Benhur Luy and his group, pointed out, as quoted in the Inquirer, “mostly truthful and partially false” and that “she was selective.” Missing from Napoles’ “final list” were six current and former senators whose names were found in Luy’s list: Edgardo Angara, Franklin Drilon, JV Ejercito, Ralph Recto, Ramon Revilla Sr. and Miriam Defensor-Santiago. Luy’s list has 138 representatives whereas Napoles only listed 100 names from the House, but as Inquirer noted, 76 names were common to both lists.

The disclosure of the explosive list has provoked all manner of denials and angry outbursts, and possibly a rain of lawsuits on the scam brains.

The question is, who was being “selective?” Was it Napoles or did Secretary De Lima already edit it to exclude some of the President’s biggest allies. Did Napoles have any choice, now that she’s fighting to be allowed to turn state witness and get a bailable sentence for her children? What happened to Benhur Luy's hard drive files? Were they also edited?

The presidential allies got off to preferred treatment. For instance, it’s difficult to think of Senate President Drilon not having enjoyed the perks of friendship with Janet Napoles when his longtime right-hand man and alter ego, former DAR Secretary Rene Villa, served as a lawyer of Napoles in his lean years at the tail end of the Arroyo administration.  As an Inquirer story on Napoles last year noted, Villa would be seen coming in and out of the Ortigas office of Napoles carrying bags of money in those pre-campaign years.

A Daily Tribune story earlier today alleged that according to a former high Palace official (in the Arroyo administration?) it was Drilon who introduced Napoles to Secretary Villa around 2004 at DAR.  But when Villa resigned, along with the Hyatt 10 in 2005 after unsuccessfully forcing President Arroyo to resign, Napoles was left to operate in DAR.

The question is, could it really be possible that given Villa’s access to all the Napoles funds the LPs under campaign manager Drilon could have resisted using them?  The two past LP campaigns have been notably awash with funds, and Napoles had admitted in her affidavit having helped to fund the campaign of reelectionist senator Alan Peter Cayetano and a number of other senators.

If the “final” Napoles list left out prominent LP leaders, it’s curious that her story about Budget Secretary Florencio Abad---how he allegedly introduced her to the magical art of PDAFs disappearing into bogus NGOs--- was allowed to find its way into Napoles’ affidavit.  Abad stoutly denies her story but there’s now tremendous pressure on “Professor Abad,” as Rep. Lito Atienza calls his former LP colleague, to resign. P-Noy was quoted today as demanding “proof” of Abad’s complicity before he acts on Budget chief's case. But it could also be that he now finds  Abad too heavy a burden to carry, and to parody a favorite hit with kids nowadays, P-Noy's now singing, "Let him go! Let him go!

I really wonder, though, if P-Noy could sack Abad, given that the latter’s genius with unspent executive funds---a dog with a brand new collar, the Disbursement Acceleration Program (DAP), every cent fully approved by the Chief Executive---was what worked its magic among the senators during the Senate trial of Chief Justice Renato Corona. It was DAP, not their individual belief that Corona had amassed ill-gotten wealth (which was never proved by the impeachment court, as then Senate President Enrile stressed in his closing statement)---that apparently convinced 20 senator-judges to throw out CJ Corona TWO YEARS TO THE DAY TOMORROW, May 29.

The country is seething in turmoil over PDAF scams and bogus NGOs and it’s hard to say just how things would turn out. Already there are a number of casualties . One is that as realization dawned that PDAFs were greedily channeled to bogus foundations for personal profit, the concept of foundations---so wonderful when used for the good---has now become suspect, as we confront the shameful reality of innumerable “foundations for rent.”

Citizens are asking, how do we ferret out the truth about these scams, what with every accused denying his or her guilt to high heavens.  Implicated senators furiously want to confront Napoles and third-degree her in their controlled environment, the Yellow Ribbon Committee---so there’s no use for such hearing. It would just turn into another circus---a waste of time!

The Board of Governors of the Integrated Bar of the Philippines published half a page in newspapers yesterday, wherein it urged the Office of the Ombudsman to exercise its “statutory power to take over the investigation of any case (regarding the PDAF controversy and other allegations of misuse of public funds) COGNIZABLE by the Sandiganbayan, to prevent confusion and promote public trust and confidence (emphasis BOC's).”

Indeed, confidence in the government has been eroded badly, but many people would question investing trust in Ombudsman Conchita Carpio Morales, as the IBP governors are urging.  She’s not even here, having flown to the US, according to news reports, to attend a two-month seminar (on what?), when the more prudent thing to do is to quickly attend to the fires flaring up over the PDAF scandals.

Moreover, the OMB proved too unreliable when she testified as hostile witness at the Senate trial of CJ Corona and threw outlandish figures about the supposed foreign bank accounts of Corona that were not supported by facts. She exhibited such an amateurish job aimed at putting down her former Chief at the Supreme Court, with those figures supposedly cobbled with the help of COA Deputy Auditor Heidi Mendoza.

Lately, as thoughtful citizens began to look desperately for solutions to the quagmire of hopelessness and deceit engulfing the nation, there’s talk about a National Transformational Council being pushed by political pundits like Carmen Pedrosa, to whom they would like to entrust the independent investigation and trial of the PDAF scams and its perpetrators. From what I gather, the NTC is being proposed to be composed of non-partisan, eminent individuals from different professions and faiths---bound by an urgent desire to bring about the redemption of our beloved country.

I think a concept like NTC would work in digging the truth about our current terrible predicament. The problem I can see immediately, however, is the absence of a Freedom of Information Law that could help in making critical documents available to the citizenry, such as those in the proposed NTC.  Given all the scandals enveloping Congress, it’s entirely conceivable that the FOI bill, until a year ago being given some kind of impetus by responsible legislators, could languish in the purgatory of dead files, as the solons fear disclosure of their shameless actuations.
Posted by Veteran Journalist and Relentless Advocate of Truth at 10:21 PM