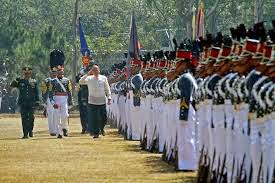 
Far from petering out into irrelevance, the case of young PMA cadet Aldrin Jeff Cudia has taken center stage when no less than the President of the Republic was reported in media today as returning the military’s report on Cudia’s case---with the order to AFP Chief of Staff Emmanuel Bautista to complete its investigation within one week.

Cadet Cudia was dismissed from the elite military academy for allegedly “lying” about the reason for his being two minutes late for his 4 pm. class. Though he was supposed to graduate as class salutatorian, Cudia was dropped from the rolls despite his defense that he and four other cadets were asked by their preceding teacher to stay behind after class, so that she could explain their grades in a previous exam.

Philippine Star quoted President Aquino as saying that the initial report  on Cudia (presumably submitted to the AFP by PMA) “failed to touch on issues that he wanted discussed thoroughly” and that he found it “incomplete,” without specifying which issues he found needing more thorough scrutiny.

Doubtless the President’s interest in the Cudia case was whet after no less than the Chief of the Public Attorney’s Office (PAO), Persida V. Rueda-Acosta, took the lead, along with Deputy Chief Public Attorney Silvestre A. Mosing and seven other Public Attorneys IV, in filing a “Motion for Leave to Intervene” before the Supreme Court last March 24, in order to seek justice for the beleaguered cadet.

The family of Cudia had confessed earlier to media that they were getting nowhere despite their appeals to the highest authorities of PMA, the military top brass and finally to President Aquino (who met with them for two hours the day before the PMA graduation, but who decided not to intervene in the Academy’s decision to drop Cudia from the roster).

Hence the family’s appeal to the PAO on Feb. 25 to take up the cudgels for the embattled cadet. Last March 24 the PAO, obviously guided by the preliminary investigation of the Commission on Human Rights that criticized the Academy’s handling of the Cudia case, decided to take it to the highest court.

The high profile case counts Renato P. Cudia, representing his son Cadet Cudia, and lawyer Berteni Cataluna Causing as petitioners and the cadet’s mother, Filipina P. Cudia, representing her son (who, said the legal brief, cannot avail of legal remedies “out of sheer respect” for the institution he was part of for four years) and on her own behalf, as intervenor-movant.

Respondents are the Superintendent of PMA, Maj. Gen. Oscar Lopez, the Honor Committee (HC) of 2014 of PMA and its members, and the Cadet Review and Appeals Board (CRAB) of PMA.

It’s interesting that both Renato and Filipina Cudia are retired enlisted personnel of the Armed Forces on meager pensions; now they’re battling the AFP hierarchy---a David and Goliath set-up.

Acting on Cataluna Causing’s earlier petition, the SC has ordered the respondents to comment, and with this development the Cudia case can be expected to be subjected to a thorough hearing, like any other case before the Court. Thus the people can expect the veil of secrecy shrouding one of the nation’s most tightly-run institutions to be rent apart.

The “Petition-in-Intervention” at the SC seeks to challenge PMA’s decision to dismiss Cadet Cudia as having been rendered “with grave abuse of discretion amounting to lack or excess of jurisdiction.” Arguing that the case seemed to have been pre-judged by the preliminary investigation team, the petition asserts that “Clearly PMA’s resolve was to dismiss Cudia no matter what.” On the other hand, it opines that the CRAB conferences were merely used to formalize his dismissal, and that “PMA never really intended to hear his side.”

The petition argues that failure to give Cudia proper hearing is a violation of the due process provision of the Constitution, as enshrined in its Bill of Rights, which takes precedence over any other ruling.  Records also indicate that in a ruling in Non vs. Dames on May 29, 1990, the High Court opined that the penalty imposed must be PROPORTIONATE TO THE OFFENSE, and that (i)f the concept of proportionality between the offense committed and sanction imposed is not followed, AN ELEMENT OF ARBITRARINESS INTRUDES (underscorings mine).”

It’s difficult to ignore the petitioners’ argument about the one-sided nature of PMA’s decision. The embattled cadet was unable to secure any documents pertaining to the accusation against him, beginning with the recorded proceedings of the HC that’s composed of nine cadet-classmates of Cudia---on the ground that these documents are highly confidential (even for the accused!).

This is one instance where the Freedom of Information Act would be useful, but unfortunately the FOI bill is still stuck in the mud in Congress.

It was only on March 11, five days before the PMA graduation, that he finally learned that he was not included in the Top 10 or even in the roll of graduates.

Against this background it’s tough to imagine he’d lie about a two-minute tardiness caused by his earlier teacher’s order to stay behind.

Moreover, only accusations against him were heard by the HC inasmuch as he could not summon any witnesses to testify for him--- including those who had stayed behind with him. This was because there was an outright order from the start of the case for all cadets not to talk to him. In PMA lingo this is the “Ostracize Order,” violation of which would be considered Class 1 offense with 45 demerits, 90 hours touring (walking the campus grounds with long firearm in hand) and 90 hours confinement.

From the start, argues the Petition, there was the decision to isolate the cadet in a holding area in the huge Regis Hall, and at some point even the Academy chaplain and Cudia's foster mother on campus were not allowed to visit him there. The isolation must have looked pretty cruel indeed to the PMA community, for later Cudia was transferred near the hospital area.

What the public hopes President Aquino would be keen to have investigated is the accusation against the HC that the voting among its nine cadet members was pressured to produce a 9-0 vote, which resulted in conviction of Cudia and expulsion from PMA.  According to HC rules a split vote of even 8-1 would absolve an accused cadet and from published reports, per sworn affidavit of an Academy official, it was an 8-1 vote until pressure was applied on the one recalcitrant cadet-member to turn around.

What happened inside the HC goes against the very spirit of the Honor Code that cadets are supposed to internalize. As the Code puts it, “Cadet actions are bound by the existing norms that are logically applied through the Code and System in order to realize the Academy’s mission to produce leaders of character---men of integrity and honor.”

Sadly, what took place in the HC in those three long nights last January does not seem to portray integrity and honor. Rather, It seems a case of honorable young cadets getting  embroiled in politics too much too soon. But why should this surprise us, given the national mania for politics of the wrong kind?

Posted by Veteran Journalist and Relentless Advocate of Truth at 9:11 PM