Anderson Cooper’s searing indictment of absence of a “ leader, government and civil defense” in PH tough to dispute---as citizens have been lamenting this issue on national level for some time now. With massive foreign aid pouring in, there should be a Rehabilitation Czar of unquestionable integrity and competence, to plan and oversee the reconstruction and rehab of calamity-stricken Visayas. 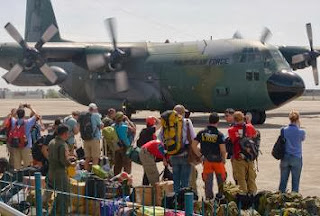 Crack CNN staffer Anderson Cooper summed up for the giant network’s international viewers his team’s judgment on the situation in Yolanda’s Ground Zero in Tacloban two days after their arrival here. Said Cooper: “There is no leader, there is no government, there is no civil defense in the Philippines.” This was the verdict on rescue operations in Tacloban, from the eyes of a commentator from a First World country.

To us natives used to the inefficiencies and ineptness of governance from the local to the national level, Cooper’s pronouncement may be harsh and “out of context” with what we term local reality;  but unfortunately it’s a  judgment that the rest of the world, even Third World settings, perhaps share and agree with in the aftermath of the super-typhoon.

At this juncture, we cannot escape the realization that the country would be in for long-term rehabilitation of an entire Visayas region devastated by the 7.2 earthquake last month and now by the merciless super-typhoon---even as the immediate needs of its suffering people in food, water, medicines and adequate health care, shelter and basic communication will have to be attended to.

With 33 foreign agencies having donated so far some P2.366 billion for rehabilitation, and doubtless more to pour in, what these calamities dictate is the need for a Rehabilitation Czar---an official of absolute competence and integrity to be appointed by President Aquino, who will be given all the powers he or she would need to undertake the mind-boggling task of reconstructing and rehabilitating the areas in the vast swathe of destruction.

We need such an official if only to lend credence to the efficient and honest use of foreign aid, as otherwise we cannot expect any help from any foreign agency ever. But is there such an animal?

This Czar has to be on top of the gigantic rehab effort and working underneath him ought to be the various line departments and agencies of government, such as DPWH, DOST, Defense, Agriculture, DOTC and other offices directly to be involved in rehabilitation and reconstruction. Such plan would bring to mind on a mini-scale the Marshall Plan drawn up primarily for the reconstruction and stabilization of war-torn Western Europe.

Recall that Secretary of State George C. Marshall was appointed by President Truman to draw up and launch at Harvard University in June 1947 this ambitious plan to rebuild the “economies and spirits” of war-torn Western Europe. Ultimately the Plan rendered to 16 nations, including Germany,  nearly $13 billion in aid until 1951---initially in the form of shipments from the US of food, staples, fuel and machinery, and later investments in industries. Conceptualized by Secretary Marshall, the plan, if I remember right, was operationalized by retired General Lucius D. Clay of the US Armed Forces.

Having a Rehabilitation Czar for the Visayas would speed up the principal---and mind-boggling---task of ECONOMIC REHABILITATION and give hope to the folks especially in Leyte and Samar---whose only dream right now seems to be to find a way out of their areas that are in a complete shambles. The long queues waiting to be accommodated in the C-130s out of Tacloban are testimony to this dream.

We cannot relocate all the Visayans seeking to get out of their hell-areas, but they will acquire hope if the administration can focus on genuine rehabilitation. It will also stabilize the region politically, as the Marshall Plan aimed to do vs. communism in Europe.

But one problem I can foresee is that the Reconstruction Czar would be so powerful---if he's to be effective he has to be invested with immense powers---that he could upset the apple-cart of politicos angling for 2016.

For foreign journalists, doubtless the most telling of all the vestiges of lack of leadership in the handling of Yolanda’s aftermath was the fact that for six days cadavers lay out in the elements in Tacloban---uncollected and unburied. The CNN team lost no time upon arrival to comment about the possibility of an epidemic arising from this situation. Christianne Amanpour of CNN confronted President Aquino on this fact of the cadavers and he was reported to have answered that “we have to attend to the living first.”

Perhaps, in the order of priorities in the washing-machine turmoil kicked up by Yolanda this was an honest confession, but to the eyes of Western reporters this was plainly unacceptable. Even among us Pinoys, we haven’t seen anything like those scenes.  Finally when the government mustered enough manpower to collect all the dead bodies for mass burial, the rescue teams ran out of body bags!

A situation like the Category 5 storm only manages to bring to the national consciousness an endless list of critical needs and priorities. For instance, Kristie Lu Stout of the CNN team was aghast that the Philippine Air Force has only three C-130s; she kept repeating it in disbelief. To us locals three is even cool as there was a time when the PAF was down to only one flying.

In a country stricken by some 20 typhoons a year, mobility is the key to saving lives and properties; but in the post-calamity week the lack of it was a major reason why it was tough to enforce law and order. The people were growing hungry and desperate for their families by the day as the limitation of carriers made it difficult to transport food, water and medical supplies from Manila.

The brother of a friend of mine drove all night to Sorsogon from Manila and then crossed to Samar by roro and ultimately to Leyte via San Juanico Bridge, just to bring critical medicines for his parents.

Not to mention that armed forces troops and police had to be flown into the calamity areas after a few days (competing with supplies in those scarce C-130s)---to replace locally based lawmen who failed to report for duty after the storm (the justifying theory of their superiors was that they probably had to attend to their own families’ welfare first).

In the face of huge storms it’s imperative to reopen airports and clear major roads for lifeline supplies.  This is where helicopters come in handy, as they can hop from town to town with their vital commodities, even if the roads are still impassable or being cleared.

I recall that when news reports came out months back about PH investing in a couple of expensive fighter planes (to fight China with?), Muntinglupa Rep. Rodolfo Biazon, House defense committee chief, opined that what we need more in our country of many islands are helicopters.  His words ring true today as countless Leyte and Samar towns remain isolated---the six helicopters mobilized for the Visayas are simply not enough.

Another unit of the AFP that has to be revitalized and better-equipped in view of the unending natural disasters in our country is the AFP's Engineering Brigade. It has to be invested with better and more modern equipment as it will be the agency charged with clearing up roads and airports rendered impassable and which DPWH cannot handle---apart from the needed security component in remote areas at times.

The Engineering Brigade likes to brag that a difficult job can be done right away, but the impossible will take a little while. This sounds like braggadocio, but this unit has the record to prove it too. But tax-payers' money has to be invested in the Brigade so that it can access remote areas in calamities.

In turn, the dire lack of facilities for rescue operations in the Visayas only recalls the pain of the unconscionable squander of many billions of taxpayers’ money by our unfeeling and uncaring politicians over several administrations. Had those billions been invested in development programs and vital infrastructure projects in various localities, perhaps rescue of typhoon-devastated citizens wouldn’t be as tough.

In this connection, CNN’s Kristie Lu Stout noted how badly-needed rescue and relief flights at night cannot be undertaken at Tacloban Airport due to the lack of night-landing equipment and its comparatively primitive state.  This is true, but it also renews talk about how this administration hijacked P700 million in funds intended for modernizing that hapless city’s airport---on the stupid reasoning that those funds were just lying around unused.

How hard is it to comprehend that given the sensitive position of Tacloban as the invariable welcoming committee for climate disturbances from the Pacific, its airport should be modernized?


polbits@yahoo.com
Posted by Veteran Journalist and Relentless Advocate of Truth at 7:22 PM