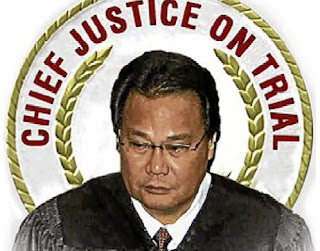 On the eve of the Ayala Avenue March tomorrow afternoon--- which is bound to revive the spirit of the pre-EDSA grand marches up and down that historic commercial district three decades ago to oust Marcos---Justice Secretary Leila de Lima dropped a bomb in the form of a massive plunder suit against various officials accused of misusing the Malampaya Fund in 2009, led by former President Macapagal Arroyo and former Executive Secretary Eduardo Ermita.

In a press con De Lima divulged contents of a 39-page legal brief culled from an NBI audit report, that alleged how GMA and Ermita opened the floodgates to abuse of P900 million of the Malampaya Funds allotted to the Department of Agrarian Reform, through EO 848 issued on October 13, 2009.

The NBI report alleged that through a conspiracy between  DAR and DBM, funds were divested from relief for areas wracked by natural calamities in 2009, to ghost projects of NGOs in the syndicate of Janet Lim Napoles---faking the signatures of 97 mayors in the process.

De Lima alleged that by July of 2009, Napoles had already known about this Fund and that her agents in various offices were already actively following fund releases and  diverting them---a full five days before the EO's issuance.

For weeks now bits and pieces about an alleged scam involving the Malampaya Fund were being released by the Palace, so that by the time this scandal was exploded this afternoon, the timing of the news release became as significant as its meat.

Recall that on the eve of the Million People March to Luneta last Aug. 26, President Aquino came out in a press con to declare his willingness and readiness to abolish the legislative pork barrel in the 2014 National Budget (but no mention of P-Noy's lump-sum presidential pork of P450 billion or its future fate). The idea obviously was to mollify citizens outraged by screaming revelations of the P10 billion Napoles pork barrel scam who planned to vent their ire at the Luneta---the first big rally vs. the Aquino regime.

In subsequent weeks, however, the Palace joined congressional allies in petitioning the Supreme Court to lift the TRO filed by various citizens’ groups, seeking to declare the pork barrel system as unconstitutional and abolish it. That unmasked the powers that be as unready to do away with pork---triggering a fresh series of street rallies.

On the eve of tomorrow's Ayala March, disclosure of alleged involvement of past administration officials in the Malampaya Fund mess again seeks to cripple the citizens’ will to continue protests against the hated pork.  But it also raises some inevitable questions.

Why the continuing concentration on the GMA years when, as a citizen put it, all this is already “old hat” and that era's main protagonist is already in the clutches of justice? What about the abuses of the current administration and its allies?

When will the wrath of P-Noy's "Three Furies," the COA and DOJ Chiefs and the Ombudsman, focus on prosecuting today’s errant officials? Will they ever dig up the dirt in the CCT funds worth a staggering P63 billion in 2014 budget? Will we ever know how much slush funds went into the RH bill votings?

Citizens note Senate President Franklin Drilon's obstinate refusal to summon Janet Napoles to testify in the Senate---despite insistent public opinion that the entire truth be laid out. Obviously he's mighty afraid of what Napoles could say about the many millions in campaign contributions she's rumored to have given the LP in 2010 and 2013. Drilon chooses to hide behind the skirt of Ombudsman Conchita Morales who opined that it's "not the right time" for the accused scam-brains to testify.

Sen. Grace Poe, however, has filed a motion to put this issue to a vote in the chamber and insiders say she has 13 votes for a Napoles testimony. Everyone's watching how the Oct. 14 Senate caucus will turn out.

Today’s presscon appears to seek to draw the heat---and media limelight---away from the raging issue of the day: the systematic bribery by the Palace---through the DBM and the office of then Senate Finance Committee Chair Drilon---of senators in order to secure and seal the conviction last May 29, 2012 of Chief Justice Renato Corona, who led the High Court in seeking just and reasonable compensation for Luisita's tiller-farmers.

Media sources revealed that pork allocations for senators voting conviction came in two tranches: in April-May 2012 at the height of the Corona trial, P556 million in PDAF to eleven senators;  then, from August to December 2012, P1.107 billion in varying amounts to 20 senators who voted for conviction of CJ Corona, this time under a new name: Disbursement Acceleration Program (a.k.a. Drilon, Abad and P-Noy or DAP).

Topnotcher in the Corona trial pork parade was then Finance Chair Franklin Drilon who bagged P40 million from PDAF and P100 million from DAP, with Senate President and presiding judge Juan Ponce Enrile and Sen. Francis Escudero as close runner-ups;  the others got only P50 million from DAP.

The Aquino propaganda machinery, grinding full blast since last week's revelation by Sen. Jinggoy Estrada of the Corona trial bribes, has sought to paint the releases as “stimuli” to whip up countryside development, “incentive” etc. Anything but bribe.

But a valid question begging to be asked is, why course the countryside 'stimuli' to senators elected at large?  Why not directly invest those funds in line departments of the Executive Branch whose job is to push projects in the countryside?

IF AT ALL, THE ONLY THING THESE 'STIMULUS' FUNDS STIMULATED WERE THE POCKETS AND CRAVINGS OF PORK-HUNGRY SOLONS.

DBM Secretary Butch Abad went on a PR rampage to deny the massive bribery to convict Corona. He said with a straight face that the administration of President Aquino “does not and will not bribe any group or individuals---whether these ‘bribes’ are offered officially or otherwise---all for the sake of getting our way, or gaining political leverage.”

Yet the bribery issue became cannon-fodder for media commentators who assert that this administration has lost all moral moorings to govern. For indeed, NOTHING IS MORE REPREHENSIBLE THAN CORRUPTING THOSE WHO HAVE TO MAKE A MORAL JUDGMENT OF CHARACTER, such as in an impeachment trial.

I personally know a number of citizens and groups who wrote to President Obama---urging him not to visit here next week, lest he's perceived as condoning a morally bankrupt regime. It’s a popular suspicion that Obama found in the budget crisis gripping the US a legitimate excuse to skip PH. But so as not to frontally offend his Pinoy ally who will provide him with the naval base for the US armed forces in poster-perfect Oyster Bay in Palawan, Obama's also skipping Malaysia in his Asian tour which will still take him to Indonesia and Brunei. He’s sending here instead Secretary of State John Kerry.

Indeed, as commentators have repeatedly asserted in past weeks, it looks like the P-Noy administration is getting to be such a drag for Uncle Sam.

The following comment was emailed by a dyed-in-the-wool Atenean (Ateneo de Manila U and Fordham University MA in Economics):

“I have just endured merciless ribbing from a Xavier School (Greenhills) graduate who said it’s true after all that Ateneo stopped teaching a LOGIC COURSE.  He argued that in the administration now are Ateneo grads who stated that when one gives money after the deed, it is not bribery!

“This cajoler then asked me to read what Star columnists who are UP grads are saying today:  Alex Magno said DBM data show that P556 million was released on the eve of CJ Corona’s conviction.  Federico Pascual cited more than P2 billion released AFTER the conviction.

“This cajoler said this is LOGICAL: you give a little before, but the big balance after satisfactory result.

“DBM Secretary Abad admitted that P10 million was given to each House member after 188 of them passed the IMPEACHMENT RESOLUTION without reading it, as per Ernesto Maceda’s Star column.

“Fr. Joaquin Bernas, SJ, on the other hand, stated on TV that the DAP that DBM Secretary Butch Abad and P-Noy concocted was illegal and a violation of the Constitution. WOW—they’re criminally liable!

“My Xavier School grad-friend then added, 'But then, Fr Bernas studied in Ateneo de Naga, not Ateneo de Manila.'

“Sad to say, it looks like we Ateneans are now such bad shots in the eyes of other Jesuit-trained folk like the Xavier guys.”

Posted by Veteran Journalist and Relentless Advocate of Truth at 10:54 PM