“Million People March” dominated by middle and upper-class elements, not usual protest hakot crowd. Protest rallies all around the country planted seeds of outrage that ought to be addressed. Distortions on Luneta crowd size and the “CJ Corona boo-ing' episode. 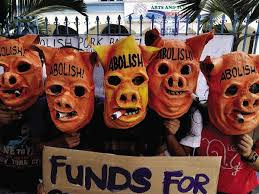 They came from all directions, as early as around 6 am. last Aug. 26, National Heroes Day, to participate in the Million People March against the hated pork barrel funds, despite many odds against them. The weather remained inclement and from time to time light showers would drop, but the people, armed with rain jackets and raincoats, rubber shoes and umbrellas, were prepared to brave even a storm.

In fact, many tents bloomed in the Luneta’s periphery where whole families with small children stayed all day, complete with deck chairs.  Hawkers made a killing selling thin asbestos sheets that tired protesters could spread on the muddy grass to rest their legs.

The US Embassy quietly advised dual citizens that there could be security threats in that mass gathering, but still people were undaunted and came out in droves.

Then too, the Palace tried to pre-empt the march the day before by calling a press conference where President Aquino, flanked by the two leaders of Congress, declared “it was time to abolish the PDAF.” But the folks did not buy that line, for it turned out that he was presenting the same dog but with a different collar---line-item budgeting instead of the old easily-manipulated lump sum.

Hence, the folks still came out en masse to press abolition not just  of congressional pork but ALL PORK, including P-Noy’s.

As has been pointed out by analysts, what was incredible about last Monday’s mammoth protest was that it was leaderless and so loosely organized---with just social media as the communications link.

There was no organized program---in fact there was no grand stage (the Quirino Grandstand didn’t serve the usual purpose as in past rallies), but a couple of small stages spread out with their own little programs, and pocket happenings in various parts of the huge grounds.

Big delegations came, with schools like St. Scholastica’s and the De La Salle University System (whose President enjoined all its schools to show up there---how did Bro. Armin Luistro defend it?), seminarians from two major seminaries, and various faith organizations.  Many show-biz celebrities showed up.

But dominating last Monday’s protest rally were innumerable small groups representing only themselves and their families and their barkada---citizens plainly outraged at politicians’ wanton squander of tax-payers' money amid the grinding poverty and crying needs of the country---and unluckily for the administration, massive floods in the wake of the habagat.

They delivered their message by wearing porky masks and outfits (like Juana Change above), or writing messages straight from the heart with pentel pen and cartolina, in computer print-outs and in handsomely prepared tarps---or simply by screaming to the max.

At 12 noon an emcee asked everyone to make any kind of noise that could reach Malacanang for one whole minute. Amid the shouting and blare of whistles I saw a little boy, maybe about 10 years old, strumming a ukelele with all his might that i feared his small fingers might break off.

What was easily noticeable, however, was that the majority of the rallyists were from the middle and upper-classes, gleaned from their poise and attire even in the rain---unlike in past massive rallies in that place where hakot crowds dominated.

This fact should worry the P-Noy administration, for it was these classes in the dying years of the prolonged Marcos era which steadily came out in the open in rally after rally, to crack wide-open the dictator’s hold. It is these classes that command people and resources that could be mobilized for any collective action in the future.

There were two distortions fed in some media.

One was the “estimate” by police authorities of the crowds as between 100,000 to 200,000. If the police really made these estimates, it was obvious that they were playing down the crowd size to please their superiors. The aerial shots showed a mammoth crowd---not in the million promised, but quite an impressive number for starters, the first mass action in the P-Noy administration.

What made them appear thin was the fact that some parts of the park were quite muddy and even filled with shallow water, forcing people to seek less hostile grounds along the periphery.

Moreover, it was significant that similar protest marches and demonstrations were made in just about every key city around the archipelago, numbering from a few hundreds to a couple of thousand participants in each.

Those sites now contain what could be the irreversible seeds of protests. For the moment it’s the gargantuan abuse of the pork barrel, but who knows what cause celebre this potent force could protest in the coming weeks and months, as the winter of political discontent over related issues sets in.

The other distortion was that former Chief Justice Renato Corona was booed by the protest crowds.  He was booed and heckled indeed, but it was only by a couple of agitators who were probably marshaled for the purpose of just screaming invectives at anyone, to disrupt the peace of the rally.

Or the agitators could have been warned the day before by Facebook entries excitedly talking about Corona’s showing up at the protest rally next day, and they lay waiting for him.

This blogger marched at past 8 am. with the group called “Tanggulang Demokrasya (Tandem),” that has been protesting various electoral frauds in the two recent automated elections.  Tandem marched from Aristocrat Restaurant, the meeting place along Roxas Blvd., all the way to the Luneta, with folks carrying banners advocating the truth about the PDAF scam.

Upon reaching the park I peeled off from the Tandem group and I began walking all over the huge park to check out the various clusters of people huddled along the low concrete fences on the periphery. That’s how I discovered where much of the crowds sought refuge under the trees, invisible to the aerial photographers.  That’s also where I saw a group of Ifugao dancers enthralling the crowds near the Manila Hotel with their tribal dances.

Toward late morning, after my inspection tour of the entire park I came to the periphery of the Quirino Grandstand that was set off from the park by steel fences. There was a little commotion and a small woman I encountered said with what seemed like a very satisfied smile, “Corona was boo-ed,” pointing in the Grandstand’s direction.

Since CJ Corona and his family are my friends I became curious and worried, and then I heard a tall muscular guy near me angrily shouting, “Epal, epal.” From a little distance, I saw some people filing into a car and I presumed they were the former CJ’s family. I later read in media that some Corona sympathizers in the crowd began counter-screaming in CJ's defense.

But what was interesting was that soon afterwards, that same tall muscular guy again began shouting, “Epal, epal.” But this time his screams were directed toward a group of male and female mestizos approaching. I couldn’t understand why the man was shouting, as the smartly-dressed group (which, I learned later, included models Georgina Wilson and Isabelle Daza) was simply sauntering by.

By then I was quite upset at the muscular man's ruckus, and I began questioning him, “Bakit kasumisigaw ng ‘Epal,’ kilala mo ba sila? May ginawa ba silang masama?”  He looked at me with a mixture of curiosity and anger, and said, “A basta, epal sila.”  I retorted, “Bakit, kasi ba hindi mo sila ka-kulay, epal na agad sila? Wala naman silang ginagawang masama.”

The guy glared at me and then abruptly left, and by then the small woman beside me had also gone.  I concluded that they were just part of the scene, typical agit-prop elements. But some yellow media made such a big deal about the crowds booing the Coronas, as though the entire Luneta had erupted in it. Far from it.

For comments/reactions, please email:
polbits@yahoo.com
Posted by Veteran Journalist and Relentless Advocate of Truth at 9:37 PM