Twin papal canonizations and beatification of Opus Dei Prelate Alvaro del Portillo coming up. New Manila City Council rejects on first reading ordinance allowing reclamation of Manila Bay from US Embassy to CCP. But we shouldn’t drop our guard on this issue, as Council has been known to change its stand before. 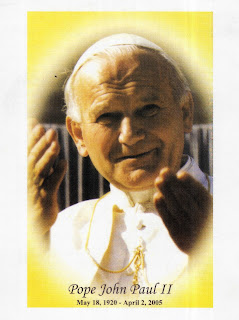 It’s a red-letter day for the Catholic Church as Pope Francis recently signed two important decrees. One was to approve the decree stating that a miracle was obtained through the intercession of Blessed John Paul II---this is now the unmistakable go-signal for his canonization (JPII having been beatified, one step to sainthood, last May 1, 2011).

Reports indicate that while JPII was said to be scheduled for sainthood this coming October 20 or 21, it has been moved to a later month within this year, in order that two big canonizations will take place simultaneously: namely, JPII’s and that of Blessed Pope John XXIII, who was beatified much earlier and whose uncorrupted body was raised from the papal crypts below and now rests in a glass sarcophagus beneath an altar not too far from the gigantic dome of Michaelangelo in the Basilica of St. Peter.

There’s no specified date as yet, but media reports said the twin canonizations could take place on Dec. 8, the Feast of the Immaculate Conception, which is always celebrated in a big way in the Church.

To me timing the two great canonizations together makes sense---just one gigantic preparation. But it’s easy to imagine the incredibly huge throngs that would flock to the Vatican for this event, for both Pontiffs have been so well-loved that each of them could already draw such fabulous crowds. Now both will be proclaimed saints together!

I have written about Pope John Paul II a lot in this space and in my FB page, but not about John XXIII.  Church historians will cite him as the Pontiff who in 1959 convoked Vatican Council II, which brought fresh winds of change to the ancient institution even as they stirred controversy in some quarters that resisted change.


I will recall this jovial, rotund pope in a more personal way. Back in the early 60s, my husband, then a young lieutenant fresh from West Point, had accompanied his boss, then Vice President and Foreign Secretary Emmanuel Pelaez, on a trip to Europe and among their stops was a courtesy call on John XXIII.

My husband recounted a personal touch displayed by the Pope when he learned that the young Filipino aide-de-camp was an Army officer just starting his career. The Pope recalled that he himself was a corporal in World War II in the Italian Army, and he put his arms around Lt. Cunanan and told him, “You're just starting, my son, but don’t worry. You will become a general one day. I'll pray for that.”

Many decades later, my husband, then retired from military life as a three-star general, knelt at the gravesite of John XXIII beneath Michaelangelo's cavernous dome, grateful for that prophesy from his fellow soldier that came true. 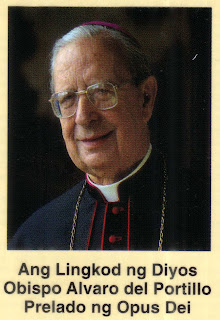 Last Friday was also a red-letter day for Opus Dei, the worldwide Catholic organization founded by St. Josemaria Escriva in 1928, for Pope Francis also signed a second decree approving a miracle obtained through the intercession of the Venerable Bishop Alvaro del Portillo, the first successor of St. Josemaria.  This opens the door to the much-awaited beatification of Don Alvaro.

The miracle involved the instantaneous healing of a Chilean new-born baby, Jose Ignacio Ureta Wilson, who suffered a few days after birth in August 2003 a cardiac arrest lasting more than 30 minutes and a massive hemorrhage. The baby’s parents prayed hard and with great faith for the intercession of Bishop Alvaro and just when the doctors thought the baby had died, “without any additional treatment and in a totally unexpected way, the heart of the new baby started to beat again…”

The Spanish-born Don Alvaro, an engineer and doctor in both History and Canon Law, was the longtime assistant and invaluable pillar of support of St. Josemaria in the expansion of Opus Dei especially in Italian cities. He was particularly helpful to the Founder in raising much-needed funds for the construction of projects in the earlier years of the Work when funds were extremely tough to obtain. Over the years that Don Alvaro spent as head of Opus Dei, he pushed the start of activities of the prelature in 20 new countries around the world.. Today the Work is found in over 60 countries with nearly 80,000 members.

As the present prelate of Opus Dei, Bishop Javier Echevarria, put it, "I turn to the intercession of this good and faithful servant (Don Alvaro) and I ask him to 'infect' us with his loyalty to God, the Church, the Pope, St. Josemaria, and to his friends...I ask (don alvaro) that he may transmit to us his special love for the family and his passionate love for the priesthood, as well as his tender and simple piety, which had such a Marian flavor."

Over 12,000 signed accounts of favors obtained from Don Alvaro’s intercession have been received by the postulator of the cause at the Vatican.  With the recent approval of that one miracle by Pope Francis attributed to Don Alvaro, who passed away on March 23, 1994 at nearly 80 years of age, the next step is for the Holy See to fix the date of his beatification.

Adding to the above joyful news of the day---rare, given the preponderance of dour news these days---is the report that the newly composed Manila City Council has passed on first reading a resolution banning the reclamation of the Manila Bay and construction of a financial district-cum multi-billion shopping mall and casino complex in the long stretch of Roxas Boulevard--- from the US Embassy in the north to the Cultural Center of the Philippines in the south.

Apparently listening to the objections to this shopping-casino complex raised by thousands of citizens, not just from Manila but from other places in the country as well, the City Council cited that reclaiming the bay would add to the threat of floodings in the city, as well as the fact that the construction would destroy the view of the world-famous Manila Bay Sunset.

The move of the new city council to strike down the old Ordinance No. 8233 that had approved this project in the just-finished Lim administration constitutes an initial victory for all of us who had campaigned against this project; but it’s good to be reminded that we cannot let our guard down.

Recall that in 1993 the city council in an earlier Lim administration, with then Vice-Mayor Lito Atienza as presiding officer, had thumbed down a similar project to reclaim vast areas of Manila Bay. Yet, in June last year the city council turned its back on that negative vote and approved the reclamation project despite the warning of Atienza, by then no longer connected with the city, that it would spell “grave environmental and economic implications.”

Let’s hope that this new city council led by re-electionist Vice-Mayor Isko Moreno would firmly reject this reclamation project once and for all.

My main objection to it is actually the fact that this world-renowned sunset would be lost forever to Manilans if blocked by the view of multi-story buildings. Manila is one of the few cities in the world---Alexandria in Egypt and Nice in France being among those I’ve visited---that boasts of a beautiful boulevard with a glorious sunset (the pavement could be improved and vandalism punished---Mayor Arsenio Lacson’s statue lost its arm as did those of a sculpted family).

The breathtaking sunset of Manila Bay is one of the rare commodities that Filipinos rich and poor share---let’s not lose it.

Posted by Veteran Journalist and Relentless Advocate of Truth at 10:42 PM