Anti-RH lawmakers’ win in 2013 elections shows pro-Life vote---a ‘work in progress.’ Is Comelec’s move vs. Buhay meant to clip this bloc in Congress? FDIs slacken instead of pulling up early this year---would P-Noy's Myanmar sales-talk improve it? K to 12 program touted to add skills to youthful labor force starting 2018, but imperative need NOW is to train millions of jobless youths---for immediate employment. 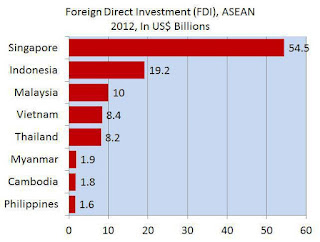 British Ambassador Stephen Lillie stressed it in a recent column and Ayala top honcho Jaime Augusto Zobel de Ayala said it too at the recent World Economic Forum in East Asia, held in Myanmar:  the Philippines needs more foreign direct investments (FDIs) if it wants to sustain the 7.8% growth earlier this year and two recent rating upgrades by Fitch and Standard and Poor’s, and promote inclusive growth to pull up the masses from grinding poverty.

The above FDI graph tells it all: PH remains at the bottom, lower even than Myanmar, Vietnam and Cambodia. In the first three months of 2013, for instance, Vietnam registered over $6 billion, an increase of 63.6% year on year, while Indonesia cornered $6.7 billion in gross FDIs.  On the other hand, PH suffered a net outflow of FDIs last March---only $78 million in the same period, compared to net inflow of $179 million same time last year.

As economists and business leaders don’t tire pointing out, FDIs in the form of more permanent investments such as job-generating factories and businesses are far preferable to the “hot money” that zooms fast into stocks and property investments, but just as easily flees abroad when the going gets rough in a country.

But why don’t FDIs come into PH?

There are many factors: perceptions of political instability, e.g., the raids on multinational firms in Mindanao and the stalling of the peace-process with the communist insurgents and the Islamic elements; the total refusal of President Noynoy to consider even amendments to the economic provisions of the Constitution, let alone a full-pledged Charter Change, and the crippling cost of power in PH, the highest in the region.

Above all, there’s the tendency of this administration early at the start to change policies in mid-stream---creating so much “unpredictability,” as European Chamber executive vice-president Henry Schumacher termed it. Three big foreign firms were affected thus when their contracts were cancelled in P-Noy's first eight months.

Clearly there remains much work on these factors if we are to encourage FDIs to come in and build those factories that would employ our able-bodied young people aching for jobs---and if we are to regain foreign investors' trust and confidence.

After P-Noy's sales pitch at the WEF in Myanmar last week, would FDIs now trickle in? Abangan.

In this connection the K to12 program of DepEd was signed into law last May 15 by President Aquino, and the concept of the two-year “senior" high school on top of the current four-year "junior" high school will be implemented nationwide beginning SY2016-2017. I wish it tremendous success.

I’m for creating a two-year “senior high school,” as it would mature our young people and prepare them better for serious college work---even though it means two years of added load for already over-burdened parents.


DepEd officials say these two additional years would involve adaption to the skills aptitude manifested by students in their respective localities, and that such training would help answer the joblessness of our young labor force. Well and good.

The sad part is that most of the unemployed (61.4%) are males, considered the main breadwinners, and they also belong to the 15-24 age group and are mostly high school and college graduates. If these graduates cannot find jobs, what more the large segment who cannot even finish grade school, so that the only jobs available to them are operating tricycles under a “boundary” system with  miserable earnings. Note two hundred or so such tricycles easily parked in any subdivision street-corner at any given time.

Easy and fast alternatives for "employment" are provided by drug rings that entice jobless, out of school youths as couriers, criminal syndicates that begin innocently as street cellphone snatching, or the insurgents in the provinces who offer fat salaries to recruits.

What’s needed NOW is an EMERGENCY tightly-coordinated (between DepEd/Tesda and the business community) and imaginative program to train our youths in various skills for something like two months max, for IMMEDIATE EMPLOYMENT.  The NSO report notes that workers in the services sector remained the largest group, comprising more than half of the labor force. It is this sector that can be trained in two months and with the boom in restaurants and hotels they can be helped in jobs.

With the Supreme Court setting for June 18 oral arguments on the RH bill, it’s time to focus once again on this highly controversial issue.

Recall that after the voting on the RH Bill last Dec. 17 by the 15th Congress, both sides said they would campaign hard for those who’d vote with them. The pro-Life side did as they said they would, and herewith, courtesy of a friend who patiently compiled these names, are the successful re-electionists in the recent elections, who had voted NO to RH---and who were not enticed to abandon their convictions with pork barrel:

That’s an 86% winning rate for those congressmen and women who voted NO TO RH and succeeded in getting re-elected.

I spoke to Cagayan de Oro Rep. Rufus Rodriguez earlier this year and he surmised that there would be about 38 or 40 House members who would form the nucleus of a pro-Life and Family group in the House. Actually with the efforts of pro-Life groups who campaigned last May many more have won seats.

In addition to the district reps, pro-Life party-list winners who made it back to the House last month were BUHAY (top vote-getter with 1.6 million votes), AKO Bicol, Ating Koop, An Waray, A Teacher, 1-Care, Abamin, and LPGMA.

On this issue I agree with Lito Atienza, Buhay lawyer Romy Macalintal and others who feel that Comelec should award Senior Citizens a seat from any of the five still un-awarded seats for the party-list quota---not from Buhay which rightfully deserves three seats owing to its landslide vote.

Knowing that a showdown could loom in Congress once again over bills that would undermine life and family, is Comelec throwing its weight with Malacanang on the Buhay issue, to clip early on the pro-Life bloc's wings?


polbits@yahoo.com
Posted by Veteran Journalist and Relentless Advocate of Truth at 6:20 PM