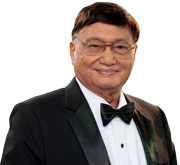 It turned out to be a grander reunion of his friends and relatives, colleagues and admirers through the many decades, as well as a sprinkling of people he had once tormented in his Inquirer columns. A splendid orchestra played---predictably---romantic favorites from the 40s, 50s and 60s, all carefully selected by Larry, a music connoisseur whose Frank Sinatra collection is probably the most formidable around.

I was walking into the party as the beguiling Moonlight Serenade filled the ballroom. Then at some point the orchestra shifted to boogie and former Sen. Eva Estrada Kalaw, smile a bit wan but still walking straight in her early ‘90s, began to wiggle boogie steps as she greeted Larry who boogied right back.

Actually the party was held on the very last night of Larry’s 88th year, as today, April 10, he turns 89. But 88 had to be celebrated, as it is “double infinity,” an intertwining of the two “8” figures---typically a Larry idea.

His children (three girls: Elvira, the breastfeeding advocate; Juno the Repertory actress and youngest child Rosanna, and three sons: Ronnie,  Atom and Danby) put together a tribute to Larry that focused mainly on his lesser-known but equally impressive activity---as a father who painstakingly filmed his children’s growing years, as he shepherded them into acting out the arts and the classics.

The fruition of his efforts was obvious in the stage talents his children, led by actress-singer Juno, displayed last night. How they can sing!

Last night was also a trip down memory lane, as one segment of the family show focused on the beautiful Cecilia Lichauco-Henares, whom Larry had briefly met in Manila before he flew off to Boston to study in Massachusetts Institute of Technology (MIT) in the mid-40s. By some fate, she ended up in the East Coast too, to seek treatment after a leg was damaged by a sniper’s bullet during the war in Manila and had to be amputated.

Hearing about her being in a hospital there, Larry renewed acquaintances and rapidly began to fall in love with the lovely young woman. He invited her to the MIT prom but she protested that she was in crutches. But her irrepressible beau had a solution for that: unable to dance the night away with his lady love because of her condition, he instead parked Cecilia---crutches and all---on the dance-floor and started dancing around and around her.  She convulsed with laughter and the Pinoy love-pair stole the show.

I’ll never forget what Larry wrote after his beloved Cecilia collapsed in his arms as they were checking into the Hotel Intercontinental in Paris, across the Louvre, upon arrival from Manila in 1993, for what was supposed to be their umpteenth honeymoon. He cradled her in his arms as she breathed her last in the hotel lobby.

Some time later he wrote a farewell tribute to his wife in his Inquirer column, which has to be one of the most beautiful odes to Love ever written.

Sure, Larry had his naughty moments, but I witnessed up close the love they had for each other. One day I teased Ces about Larry’s column photo, which was probably taken 30 years back. She rallied to his defense right away, arguing that he had to look young as he was surrounded by all of us younger columnists.

Back in our days at the Inquirer, a major consideration of its venerable founder, the legendary Eggie Apostol, was, how do you solve a problem like Hilarion M. Henares? Always sparkling with wit and devilish humor, but alas, also terribly irreverent and unorthodox, Larry’s daily columns necessitated, as the joke went in the newspaper, the hiring of a law firm virtually full-time for him. Lawsuits rained on his head practically every week.

And why not? Blessed with an inimitable power over words that could move people to tears---or grrrr...rage---one day Larry wrote about a prominent family famous for being such tightwads despite their old wealth. He wrote that its members were under strict orders to conserve water, so that they could only flush the toilet after using it five times. In fact it became a family practice, wrote Larry, for the members to mark on the wall facing the throne how many times they did it---one, two, three, four and, slash, five, etc.

How would you react if you were and written up that way?

With his sardonic wit that very much recalled that Baltimore arsenic in the morning readers' coffee, H. L. Mencken, Larry would poke fun at a lot of people, and even we his fellow columnists were no exception.

Soon after the big coup d’etat of December 1989, we were talking in the newsroom about it and I recounted that my husband, then a brigade commander in Southern Luzon, had the unenviable task of defending Camp Aguinaldo from the rebels and saving Cory's government. Then Col. Cunanan lost 16 soldiers in the process---in the accidental strafing of his people by friendly fire outside the camp and during the enemy attack itself.

But Larry, ever the tease, opined that that was just “acoustic warfare.”  I was getting angrier by then but he wouldn’t stop, so I burst out, “Larry, if you don’t stop, I’ll pull off your toupee!” He yelled, “Help,” and ran clear across the newsroom for dear life.

Indeed I had my own excruciating moments over how to handle the problem that was Larry, but he sure made up for them.  Many years back I was in Berne, Switzerland, doing some articles on the Marcos hidden wealth and I brought my two young sons with me. Entering Italy from Switzerland aboard a long transcontinental train, we three Filipinos were suddenly ordered by the Italian border police to get down with our suitcases. Those were the years when Pinoys were treated so shabbily in Europe.

The police furiously poured over one thick book after another for half an hour and we didn't know what hit us. Meantime the entire train was waiting and everyone there wanted to kill us for the hideous delay. Finally the police let us go---with no explanation or apology whatsoever.

My son Buddy felt so humiliated that he stayed in the back of the train for the rest of the ride to Rome.

In Manila I recounted to Larry our Italian border nightmare as well as that of the Erda Founder, 98-year old French-born Fr. Pierre Tritz S.J. who in 1974 acquired Filipino citizenship and also suffered the same humiliation in Italy despite his aquiline nose and accent.

Larry exploded in anger and a day later wrote such an insulting column about Italy, calling it the “smelly armpit of Europe.”  This time it was the Italian ambassador's turn to fly into a rage. Tom Concepcion, the Rome-based, multi-awarded Filipino painter-sculptor, who was our host there, also felt that Larry's column was too much, but that's Larry.

To Larry, may you have many more years with your six children and their spouses, and your 18 grandchildren!  I think St. Peter is still trying to process the problem of what to do with you up there. So, relax and boogie your way to your 9th decade.

Posted by Veteran Journalist and Relentless Advocate of Truth at 8:45 AM