Read about stats on political dynasties dished out in AIM Policy Center's recent forum and be disturbed---and join MAD. Where's Drilon’s smugness about 12-0 senatorial win of LP Coalition coming from? Is it his confidence in PCOS fraud, and Padaca’s and now Macabangkit Lanto’s appointments to Comelec? Bernadette Sardillo exhibits delicadeza in declining appointment, unlike Lanto. 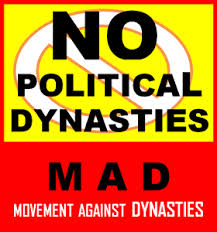 Last Thursday the Asian Institute of Management's Policy Center, with the support of Konrad Adenauer Stiftung and in partnership with UP National College of Public Administration and Governance and the Ateneo School of Government, conducted a forum titled “Building an Inclusive Democracy.”

Speakers from these institutions zeroed in on various aspects of dynastic politics and confirmed what you and I have known all along and decried, but which we have been quite ineffective in stemming its perennial onslaught: that political dynasties are harmful and pernicious and have contributed a lot to the sorry state of our politics today.

The questions raised include the following: How inclusive is our democracy? Is the country’s political system nurturing more dynastic leaders? What are the platforms of the different political parties and how do they ensure continuity of their platforms? What’s the role of political parties in the development of strong institutions?

The forum took a look at existing political structures many of which date  from colonial times, and these inevitably took the blame for the current deplorable political morass we're in---e.g. the prevailing turncoatism whereby members of political parties jump like chimpanzees from one party to another, specifically into the one coming to power. Sheer political opportunism.

It was noted that the framers of the 1987 Constitution had good intentions in seeking to break up political dynasties, by installing term limits on public offices; this began in 1998 in the 11th Congress. But as Dr. Julio Teehankee of De La Salle University noted, term-limit sadly achieved quite the opposite, for those "graduating" simply made their spouse or child run in their place for one term, only to recapture it after.

The conclusion one inevitably came to derive from this forum was: despite the argument of entrenched political dynasties that there are "good dynasties" and "bad dynasties," in the long run dynasties per se are not good as they stunt the growth of alternative leaders and affect even the economic development of their localities.

In many cases prevalence of dynasties leads to abuse of power and even warlordism in various regions, especially in Mindanao. The rise in violence every election time in many areas is terrible testimony.

I'll be writing about various aspects of dynastic politics after I gather and analyze the material given out at the AIM forum. For the moment consider these facts dished out by Dr. Ronald Mendoza, AIM Policy Center executive director:  70 percent of members of the 15th Congress that’s winding up this mid-year come from dynasties; roughly 80 percent of the youngest members of Congress (ages 26 to 40) are from the dynastic class; there are more dynasties in regions with higher poverty and lower human development---a very direct relationship between poverty incidence and prevalence of dynastic politics.

Also, mentioned informally at the forum was that the going rate for vote-buying nowadays is said to be P1,500 per vote in some places, and even P10,000 per in the gold-rich areas. That's a long way from the P300 to P500 per in earlier years. The academics' conclusion: politicians may be “pricing themselves out of the market.”

As an apropos, I recently ran into a friend whose brother used to run for Congress in the South. She said that her brother now refuses to do so as he cannot win against the drug-lords who control the province’s politics.

Tune into this blog for more devastating---and depressing--- data as I collate  more info from the forum.

Filling up one big table at the AIM forum were members of the movement called “Mad Against Dynasties,” or simply “MAD,” led by its lead convenor Quentin Paredes San Diego and co-convenor Danny Olivares. All the members of MAD were in blazing red and they flashed the slogan “Isa Lang Kada Angkan. Huwag gawing negosyo ang pulitika.” MAD members are going around the country denouncing the evils of political dynasties and they have gained the support of many bishops and other faith leaders (it will be recalled that the CBCP’s Jan. 29 Pastoral Letter took a very strong stand against political dynasties). One of MAD's staunch supporters is Cagayan de Oro Archbishop Antonio Ledesma.

MAD members are also gathering an ambitious 5 million signatures to put in place a people’s initiative that would establish the ENABLING LAW sought by the Constitution under Sec. 26, Art. II (but which Congress has consistently refused to enact since the first POST-EDSA Senate President, Jovito Salonga called for its passage in the first Senate).   If you folks are sufficiently mad at dynasties, please join MAD by calling up up 0915 560 9182/ 0917 837 4792, or 920-9608/0926-758 3634, or visit their MAD headquarters at 101 Panay Ave., Q.C., near Capital Medical Center.

Obviously the Comelec is being primed to ensure the 12-0 senatorial victory of the LP Coalition this May. This blogger has written, together with many other writers, reams and reams about the innumerable defects of the PCOS machines that seem guaranteed to give us failed and tampered elections.

Then there's the members of the Comelec.  First, President Aquino appointed former Isabela Gov. Grace Padaca despite her facing a graft case during her term. The Sandiganbayan took forever in slapping the charge, but when it finally did, P-Noy himself posted the P70, 000 bail for Padaca, who was escorted to the graft court by no less than DILG Secretary Mar Roxas.  Now she thumbs her nose at critics, asserting that  she now can only be removed by impeachment.

Now comes the appointment of Macabangkit Lanto to one of the two last  vacancies in the Comelec, engineered by no less than Sen. Franklin Drilon, the LP campaign manager The move is as brazen and defiant of acceptable political conduct as can be, for a number of reasons.

Mac Lanto is openly known as a crony of Drilon, as it was the latter who got him appointed as ambassador to Egypt and Sudan in the GMA era and then as OIC governor of ARMM in 2011. But more grievous is that former Rep. Lanto was ousted by the House Electoral Tribunal for electoral fraud!

This move to appoint him to the Comelec makes a mockery of the people as well as of Congress, whose members will have to pass judgment on him in the Commission on Appointments. For it shows that as in other previous cases such as CJ Renato Corona's impeachment and the RH bill, the LP is super-confident that it has Congress snugly in its pocket.

Election lawyer Bernadette Sardillo, P-Noy's other appointee to the Comelec, displays far more delicadeza as she declined her appointment today.  She doubtless can anticipate the controversies she's be involved in and wisely opted out.

UNA Spokesperson Toby Tiangco is tearing his styled hair-do decrying Lanto's appointment. Despite the recent riotings in the Davao regional DSWD office by hungry Pablo victims, the outrage of the Muslim population over the shabby treatment of Sultan Kiram by the administration, the campaign against political dynasties by MAD and the snow-balling Team Patay campaign of various Catholic Bishops, Drilon continues to be smug about a 12-0 LP win. But Toby assures him that this is all a myth.

For comments/reactions, please email:
polbits@yahoo.com
Posted by Veteran Journalist and Relentless Advocate of Truth at 9:04 AM