Many centuries ago Christ told the first Francis, “My house is in ruins. Go and repair it.” Today Christ gives another Francis similar marching order about today’s Church with all its problems and difficulties. As Argentine writer Carlos Caso Rosende advises today’s clergy, “Watch him do it and learn.”

Tomorrow Christendom celebrates Easter Sunday, which commemorates the resurrection of Christ and His conquest of death. Easter is both very spiritual as well as physical especially for the temperate countries. For it  always falls on the Sunday after the first full moon in Spring, and after the long dark winter which, in the Western world was particularly harsh last season, now comes glorious spring---when the shrubbery, hitherto lain fallow and seemingly dead, begins to exhibit new leaves, heralding renewed life.

In New York City, for instance, joy is uninhibited as people stage the annual Easter Parade downtown, with the women donning all their finery and beautiful and interesting hats. There is an unmistakable headiness in the  “spring-fever” which we in the tropics may not fully comprehend.

We Pinoys are particularly notorious around the world for our special way of celebrating the longest Christmas in the world---beginning in September and ending in early January.  As our spiritual guide in the Holy Land in year 2000, Fr. Rene Lopez, told our group: we are very much a Christmas people, more than an Easter people. But theologically Easter is held perhaps more significant for one good reason that St. Josemaria Escriva, the founder of Opus Dei, explains in his book, “In Conversation with God.”  Said St. Josemaria:

“The glorious resurrection of the Lord is the key to interpreting his whole life, and the ground of our faith. Without this victory over death, says St. Paul, all our preaching would be useless and our faith in vain (cf 1 Cor 15:14-17). Furthermore, the guarantee of our future resurrection is secured upon the resurrection of Christ, because although we were dead through sin, God, full of mercy, moved by the infinite compassion with which he loved, gave us Christ…and He raised us with him (Eph 2:4-6). Easter is the celebration of our Redemption, and therefore the celebration of thanksgiving and joy.”

Looking for an inspirational piece suitable for Easter Sunday, I read this article by Argentine writer Carlos Caso-Rosende. Titled “He walks with Mary and St. Francis,” emailed to me by friends, this piece reflects on what Pope Francis brings to the papacy. But first and foremost, it speaks of the deep influence the former Cardinal Jorge Ma. Bergoglio had wielded on the local clergy during his reign as the Primate of Buenos Aires.

May it inspire our local Church officialdom to imitate the Christ-like humility and simplicity of the Pope, his charity and his profound devotion to Mary from the very beginning, that have now taken the world by storm.  Enjoy this piece from Carlos Caso-Rosende:

“It seems like yesterday when the news of the abdication of our beloved Benedict shocked the world. It was Feb. 11, the feast day of Our Lady of Lourdes. I think that was a significant date, full of meaning, and definitely a Marian date.

“The news came to me as I sat at my computer early in the morning, Buenos Aires time. The "Pope Resigns!" headlines woke me up before I could take the first sip of my morning coffee. I started making quick calculations. A glance at the calendar revealed March 13 as a possible date for something big.

“The 13th of each month is the day of the Mystical Rose, Our Lady, Queen of Priests. Since the priesthood in the Church is in sore need of healing these days, it seemed natural (or rather supernatural) that a new pope, a Marian pope, would be called to be Vicar of Christ on that day. “When the conclave began March 12, I knew in my heart it was going to be short — and the white smoke on the second day did not surprise me at all. When I learned it was Cardinal Bergoglio, that was no surprise either. And when I heard the name Francis, I said to myself: "Of course!" Here in Buenos Aires, we know him as the archbishop who takes the bus to work, cooks his own meals and talks to everyone in his own folksy manner.

“Pope Francis is Peter, a fisher of men, for our times. But I expect him to spend more time working on the nets than holding the helm. His favorite kind of net is prayer, and his guide is Mary, the Morning Star. 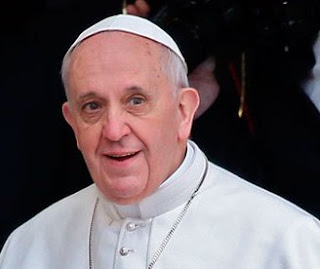 “Francis will be more apt to kiss the wounds of the leper on the road to
Assisi than to have his ring kissed. He ascended to the throne of Peter on the Feast of St. Joseph because he is also, like that saint, a man of few words, a man who leads by silent, manly example. The lukewarm and complacent in our Church are about to experience the power of his sanctity.

“Like many Argentines, Pope Francis descends from Piedmontese immigrants, and I believe his strong Marian traits are part of his upbringing: La Madonnina was part of the family back then, and Pope Francis never ceased walking with her. He has repeatedly consecrated the Archdiocese of Buenos Aires to the Immaculate Conception, and it was no surprise that, in his brief address to all of us the night of his election, he mentioned his intention to also entrust the city of Rome and the life of Pope Emeritus Benedict to the loving care of our Blessed mother.

“When I attended Mass at my neighborhood parish later in the evening on that historic day, I noticed that the entire parish priests where there. I happen to know that they were all formed as priests at the side of Cardinal Bergoglio. It was an unseasonable cold afternoon, and I saw a young boy begging by the main entrance to our church. He must have been about 11 years old, and he was shivering, dressed as he was only in a t-shirt and short trousers. One of the priests walked by, and I noticed he gave a quick glance to the boy. He went into his office and returned with a long-sleeve cotton shirt and a sweater taken from the charity boxes. Moving quickly, because Mass was just about to start, he gave the boy the items and made sure he put them on.

“The whole thing took about a minute, and I was the only witness: I don’t think Father noticed that I was standing there. I recall this because that is a gesture of genuine care by a man who grew as a priest under Cardinal Bergoglio’s watch. That is the spirit of this archdiocese.That is what the careful example of Francis has sown in this big, unforgiving city at the end of the world.

“The following day, I was having lunch with a friend not far from church when I overheard a group of Jewish neighbors at the next table talking about the new Pope. They loved him, and one of them was talking about the priests the cardinal sent regularly to the slums and shantytowns to say Mass and help the poor in any way they could. Someone interrupted the story at that point and quipped: "I wonder how many socialists go there to deliver a cup of soup after elections are over." "That is seed falling on fertile soil,” I thought.

“A long time ago, another Francis used to walk through the villages without uttering a word, letting his tattered habit and simple sandals do the talking. That Francis once heard God say: "Francis, go and repair my house. Don’t you see it’s in ruins?" Francis was not strong, rich, impressive, eloquent or erudite. That is why, once the house was rebuilt, everyone knew that the power of God had done it through him.

“Another Francis comes to us today. He faces a colossal task, armed only with the simple habits that some in the Church forgot long ago: prayer, simplicity, charity and a serene manliness. There is no doubt in my mind that he will know how to shepherd his flock in these turbulent times. Watch him do it and learn.”

For comments/reactions, please email:
polbits@yahoo.com
Posted by Veteran Journalist and Relentless Advocate of Truth at 3:25 PM