Smartmatic’s super-salesman, Cesar Flores, seeks to reassure Pinoy voters everything will work out in our 2013 automated elections. But should we trust him again, given all that Smartmatic promised in 2010 which it now claims Dominion, the real owner of the automation technology, never delivered? Will it be, in the end, pera-pera lang?

There goes Smartmatic International (SMMT) President for Asia-Pacific Cesar Flores again, seeking to reassure Filipino voters, as quoted in Philippine Star today, that its dispute with Dominion Voting Systems International Corporation “would not affect the country’s mid-term elections in 2013.” Flores was reacting to stories sprouting all over media about the sensational suit and counter-suit the two IT rivals filed against each other before the Delaware Chancery Court in the US, that was triggered by the cancellation by Dominion of its license agreement with SMMT last May 23, 2012.

In the 2010 elections SMMT leased some 82,000 PCOS machines to the Comelec, while Dominion provided the automated election technology which it owned. But the sudden cancellation by Dominion of its license agreement with SMMT---and SMMT’s legal recourse to the Delaware court for breach of contract, and Dominion’s counter-suit vs. SMMT for failure to abide by the 2009 terms of agreement---have placed our 2013 elections in jeopardy.

SMMT, through Flores, seeks to reassure us Filipinos that his company could still use Dominion’s technology while the Delaware case is pending, and that they are very confident of winning the case vs. Dominion in the end. But Dominion in its counter-suit flatly denies that SMMT could still use that technology as the license to do so has already been withdrawn.  Thus, if SMMT were to resort to Dominion’s intellectual property for our 2013 elections, it would be what local IT experts term “pirated technology” or “contraband technology.” The government could get into trouble for this.

The question in many minds is, why should we fall a second time for SMMT’s claims, which in the light of the celebrated court cases in Delaware between it and Dominion, could indeed be merely a NEW ROUND OF DECEPTIONS.

For example, it will be recalled that SMMT always said that it had already deposited in escrow the "source code" for the 2010 elections in the Bangko Sentral ng Pilipinas. The source code is the heart of the program that operates the automated election system (AES). But in its Delaware suit this year, SMMT finally admitted it was Dominion who held this source code and that it was never turned over to SMMT---and certainly NEVER was held in escrow in BSP.

Parang sira ulo ang mga IT experts natin, demanding to inspect this source code, even to the extent of filing a suit with the Supreme Court---which ordered that SMMT allow the experts to study it. Wala pa talaga dito.

The Philippine government should steer clear of this jeopardy.

As usual SMMT's prexy Flores is trying to paint a rosy picture for the 2013 automated elections here, as he did in the May 2010 elections, whose results are now being scrutinized and questioned by various sectors. But as Filipino IT experts have warned, our 2013 elections could be caught in the middle of these expensive Delaware lawsuits that could drag on beyond the elections.

Moreover, the accusation of Dominion that SMMT has neglected its duty to test-run the PCOS machines in the 2010 elections is now severely trying the Filipinio people’s faith in the credibility of our AES---as we prepare for 2013.

As an immediate example of easily understandable poor performance, our local IT experts noted that last July 24-25, 2012, mock elections were conducted during the hearing of the House Committee on Suffrage and Electoral Reforms. The SMMT report clearly showed that the PCOS machines being tested failed to meet the required accuracy rate of 99.995%---attaining only 97.215%.

What does this discrepancy mean? According to the experts, per the project’s terms of reference, “PCOS is only allowed 1 error in 20,000 marks; but the results of those committee mock elections translate to 557 errors in 20,000 marks.”  Stressed the IT experts, “This error rate can make or unmake mayors, governors, congressmen, and the bottom half of councilors, provincial board members, and senators!”

This computation by the IT experts should make the Joint Congressional Oversight Committee (JCOC), that began looking into the 2010 (AES) only last Wednesday---as co-presided by Sen. Alan Peter Cayetano and Cavite Rep. Elpidio Barzaga Jr.---sit up and worry.  The error rate of the PCOS machines could make these very members of Congress victims of hocus-picos, to borrow former President Erap’s memorable phrase in 2010. 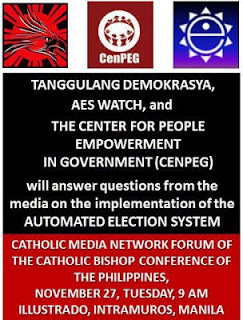 This Tuesday, Nov. 27, members of the Filipino IT community, led by the Center for People Empowerment in Government (CenPeg) and the AES Watch, in conjunction with Tanggulang Demokrasya (Tandem), a civic organization led by Victor Barrios that was active as election watchdog in 2010, will co-sponsor a presscon at the CBCP Forum in Intramuros. The IT experts will touch on the lawsuits in the Delaware Chancery Court and their possible repercussions on our AES, particularly its technical vulnerabilities.

As the Tandem advance statement put it, “The most basic truth that saw the light of day through these events (in Delaware) was: As suspected, there was really something wrong with the 2010 elections, and a number of people lied and connived to conceal what was wrong. With this we arrive at the following conclusion: The upcoming 2013 elections, in its current form that is based on a tainted technology, must not be permitted to push through.”

Admittedly, the future of our AES in its present form---where the Comelec was  given the green light by the Supreme Court a mere two weeks after the impeachment of Chief Justice Renato Corona, to buy from SMMT some 81,000 PCOS machines used in 2010, but now supposedly already upgraded for the 2013 elections---is dark and dingy.

But is there a solution being explored by SMMT?

At last Wednesday’s first hearing at the Senate of the JCOC on the 2010 AES, Comelec Chairman Sixto Brillantes asked to be excused as he was meeting the Canadian Ambassador for lunch, accompanied by newest Commissioner Grace Padaca.  To the uninitiated, that meant just another lunch date, but to IT experts present it meant an entire world.

This is because there’s rumors going on that to save the day for SMMT International, it plans to appeal to Dominion Canada (which I understand is the mother company of Dominion International) to allow its PCOS technology to be used in the Ph elections of 2013, in the light of the cancellation of the license agreement with SMMT by Dominion International.

There’s talk that during the recent state visit here of Canadian Prime Minister Stephen Harper, Comelec and Smartmatic officials spoke to him about the Delaware problem as well as the urgency of Ph elections six months away---and a possible rescue solution that could be offered by Dominion Canada.

There are observers who opine that ultimately the SMMT-Dominion quarrel will just be a question of “pera pera lang:” ---- e.g., SMMT, to avoid loss of face before the international community in the Philippine elections, would agree to negotiate a new “Statement of Work (SOW)” with Dominion to cover the Ph 2013 elections, as Dominion is insisting. Although SMMT and Dominion had preliminary discussions about a possible SOW for future collaborations in Ph, the parties had failed to reach agreement. But now things might have changed.

Was Chairman Brillantes’ and Commissioner Padaca’s lunch with the Canadian Ambassador part of the new solution? Abangan.

Posted by Veteran Journalist and Relentless Advocate of Truth at 9:55 PM