Sources within the corridors of power say P-Noy was rather cool to impeaching CJ Corona at first, especially since Justice del Castillo, who faces a slumbering impeachment in the House, has been ‘behaving well;’ but what triggered P-Noy’s impeach move vs. Corona appears to be SC’s unanimous decision ordering re-distribution of Hacienda Luisita to the farmers.

A Happy New Year to all my readers. The year we bring to a close has been, as a political pundit put it, annus horribilis---a most terrible year visited by political storms not seen in three decades, economic slowdown, increasing percentage of self-rated poor, and natural calamities that devastated many regions of the country, the most recent being Sendong, which left thousands dead and many other thousands homeless. But despite the fact that 2012 does not look bright, as the nation could face more political storms, our Christian attitude is to hope in God’s Providence and blessings, even as we rely on our inner strength and resilience as a people.

A Palace insider recently recounted to the media the events that led to the impeachment move of President Aquino against Chief Justice Renato Corona, as directed to the obedient House leaders. Interestingly, around mid-October, as the nation keenly anticipated the Pacquiao-Marquez fight, senior House leaders who met with President Aquino in the Palace at that time were quite surprised to realize that he was actually not interested in getting Corona impeached.

At that time the impeachment case against SC Associate Justice Mariano del Castillo was slumbering quietly in the House justice committee, and P-Noy, according to insiders, felt that Del Castillo had been “mabait naman” in his behavior (in fact, he stayed abroad for a while, perhaps to keep out of controversy), mukhang okay naman ang Supreme Court. P-Noy apparently realized that it was no joke to impeach the CJ as there were constitutional issues involved.

But then, suddenly, by late November things changed. In a meeting with Speaker Sonny Belmonte and Majority Leader Boyet Gonzales, P-Noy, reportedly bristling with anger, was said to have thundered that while he is President, the developments in the SC cannot be allowed to continue. The order now was for Corona to be impeached by the House, and the leaders quickly set it in motion.
As a prelude, P-Noy launched two severe attacks on the CJ at the Makati Business Club last Dec. 1 and at the National Criminal Justice Summit at the Manila Hotel on Dec. 5, where the SC was co-host of a seminar-workshop on greater cooperation within the judiciary. The CJ was personally at the summit's opening, just two feet from where P-Noy was attacking him frontally.

What triggered the change of course of P-Noy? It appears that there were two triggers. One was the SC’s TRO on the Department of Justice’s watch-list order on GMA, promulgated last Nov. 15, allowing her and husband Mike Arroyo to leave for her treatment abroad. The TRO order was a vote of 8-5 in the SC, two days later it even became 9-4; but the DOJ defied that TRO and prevented GMA from leaving in an ugly airport scuffle. The Palace got the upper hand there, so I would not count the TRO trigger as serious.
﻿﻿

To my mind, and a number of political analysts have said this too, the main trigger came last Nov. 22 with the promulgation of the SC decision in Hacienda Luisita, Inc. vs. Presidential Agrarian Reform Council et al. In a vote of 14-1 the SC ordered the distribution of the Hacienda lands owned by P-Noy’s family to the farmer-beneficiaries.

Even the Chief Justice himself, in his response to the House Articles of Impeachment (now available to netizens on-line at http://www.abs-cbnnews.com/-depth/12/26/11/cj-coronas-answer-impeachment -complaint), appears to recognize the SC order on Hacienda Luisita as the triggering factor for his impeachment. For as Corona, speaking through his lawyers, noted, “These speeches (of Dec. 1 and 5) followed on the heels of the promulgation of the decision in (Hacienda Luisita)…As if on cue, after the President’s speeches, the members of the House of Representatives adopted/signed the Articles on Impeachment against CJ Corona.”

Soon after the SC decision on Luisita, reports circulated that some Aquino relatives went ballistic and told off P-Noy, saying that the Hacienda had survived through all the various presidents, why did it have to be under HIS presidency that the SC order should come down?

I can see the logic in their argument, but the problem is that since the Cojuangcos acquired the over 6,000 has. estate---the BIGGEST HACIENDA in the entire country---way back in 1958 with funds borrowed from GSIS and foreign banks backed by sovereign Philippine government guarantees, the stipulation was that after ten years, or in 1968, Luisita should be distributed to the farmers tilling the soil there. But through various court maneuvers right in Marcos’ time, strengthened in Cory Aquino’s presidency and up to GMA's  administration, the Cojuangcos had eluded the redistribution verdict and made billions selling portions of it to commercial ventures (such as the 80 plus hectares sold late in 2004 to BCDA to become part of SCTEX) or opening up portions themselves in commercial endeavors.

Today over 4,000 hectares of Luisita remain in the Cojuangco family's hands--a priceless jewel of an estate right in the heart of Central Luzon; prospects for its development as a huge industrial estate boggle the mind. But the SC, in a unanimous vote  (with only senior Associate Justice Antonio Carpio, now being bruited as a possible replacement for CJ Corona, issuing the sole abstention), decided to re-distribute these over 4,000 has. to the long-suffering farmers of Luisita. And, I suppose, adding insult to injury for the Cojuangcos was that CJ Corona argued forcefully that the family ought to be paid for the land by the farmers at its value in 1989, when the stock distribution option was offered to them by Cory’s administration; whereas, Justice Maylou Sereno, said to be P-Noy's favorite candidate to replace Corona, is batting for 2006 prices, which makes a world of difference.

In the meantime that valuation is being debated, Luisita’s farmers have become restive again, just like in 2004, and the recent burning of 300 hectares there is indication. 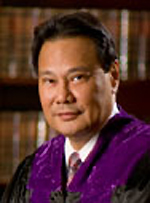 ﻿﻿ The long-festering issue of Luisita has come to a head under the Corona Court, and that’s apparently why the CJ had to be impeached. Unfortunately the impeachment move has brought the constitutional government to near-crisis affecting the separation of powers and the very independence of the judiciary, the last bastion of citizens’ right. The outcome of the Senate trial could leave the country in turmoil.
P-Noy himself has been saying over and over that the SC has to be revamped as it has been the "obstacle" to his "reform agenda."  But when you come right down to it, behind the sanctimonious and self-righteous claims about ensuring the people's welfare and needed reforms, THE HOUSE IMPEACHMENT APPEARS TO BE REALLY ALL ABOUT LUISITA.

This paradox reminds me somewhat of a scene from Bruce Willis’ first movie in his terrorism series, "Die-Hard 1," where his gutsy movie-wife, Holly Genaro, confronted the German leader of the terrorist gang that attacked the Nakatomi Plaza in downtown LA during a Christmas Eve party. The terrorists had held the entire personnel of the Japanese-owned corporation hostage and in demanding an escape route the leader sought to make high-sounding demands, such as the release of this and that principled prisoner or freedom-fighter in various prisons around the world. But in the end Holly  realized that what the terrorists were only really after was the huge bundle of bearer bonds in the company’s vaults. Ultimately those bearer bonds just flew out the window all over LA.
﻿﻿
﻿﻿

Posted by Veteran Journalist and Relentless Advocate of Truth at 12:19 PM