SC Chief Corona, in bearing P-Noy’s personal attack, conjures image of another figure over 2,000 years ago, who also took all the blows and tortures meekly---an apt image for this Season of Grace and Peace 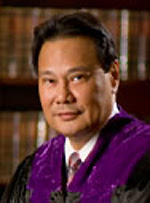 Watching Supreme Court Chief Justice Renato Corona yesterday morning trying to look stoic and dispassionate, while President Aquino harangued his person and the Court for about 30 minutes or so, I was suddenly reminded of another figure who, over 2,000 years ago, also took all the ridicule, the blows and the tortures meekly and without a word.
That singular lesson of humility in the face of  adversity from the Man in the crimson cloak over 2,000 years ago has made all the difference in the world over the centuries. This figure in history, whose birth we'll commemorate in another 19 days, ended up reigning in millions of hearts---as the ringing words of Handel’s Messiah put it, “And He shall reign forever and ever.”
XXX
Yesterday’s broadside by the President at the Manila Hotel (his speech was reported by dzRH to have been written by Political Adviser Ronald Llamas, former Akbayan president), so soon after his attacks on the CJ and the Court at the Makati Business Club, left the media and everyone else in this nation quite stunned. As Sen. Joker Arroyo noted, the venerable Sen. Lorenzo Tanada had cautioned all the hotheads fighting Marcos in the martial law years never to get personal toward the SC, for Tanada realized that to destroy the SC is to destroy the rule of law in our society. Indeed the effect of P-Noy's tirade against the SC yesterday couldn’t have been any worse had he declared martial law or a revolutionary government!

Afterwards media beseiged the CJ to react, doubtless thinking that because he is a Batangueno he would counter-punch. But he told them not to play up the attack as “it’s almost Christmas. Let’s think of peace.” At that moment Corona looked every inch a statesman, while his attacker looked like a spoiled brat itching for a fight.
Sometimes words of peace can be more powerful than the biggest blows, as that figure of over 2,000 years ago clearly showed. Hallelujah to the peace-makers, for they shall inherit the earth, as the Good Book says.
XXX
There were rumors that as P-Noy was delivering his scathing remarks at the Summit, there were justices and judges who considered walking out; luckily they restrained themselves, which was good, as a walkout would have exacerbated the conflict and tension between the two co-equal branches of government that's already engulfing the nation. It's lamentable that today certain leftist elements are irres-ponsibly stoking instability by seeking to destroy the SC as an institution, including inciting mobsters to "Occupy" it. It's not remote that black propaganda would be unleashed against Corona in subsequent weeks.
﻿
﻿﻿﻿ ﻿ ﻿﻿﻿﻿﻿﻿﻿﻿
﻿ ﻿ ﻿﻿﻿
﻿﻿
Several commentators, among them Sen.  Arroyo and columnist Amando Doronila, have pointed to the SC’s helplessness to answer attacks against it---noting that the SC can only comment officially through  decisions and rulings. In the good old days of constitutional supremacy, those SC pronouncements were sacrosanct and . HEREIN LAY THE AGONY AND THE ECSTACY OF OUR HIGH COURT. By contrast, the President has the entire machinery of government and its vast propaganda arm at his disposal, to mobilize public opinion (e.g., the so-called public opinion “surveys” on various issues and events as gathered by a sympathetic TV network) in his support.


Recently P-Noy shocked the nation with his unprecedented disrespect and defiance of the High Court, and all that Court spokesperson Midas Marquez could stoically say was that “”it’s disturbing.” But many citizens are not blind. They know where the attacks are coming from.
XXX
Sounding so pikon and bratty, P-Noy violated good manners and right conduct that dictate that the keynote guest should not bad-mouth his host (Corona was seminar co-host with Justice Secretary Leila de Lima)---there are allowable venues for that kind of bout. Yesterday was the first-ever National Criminal Justice Summit sponsored by the Supreme Court and the Department of Justice, whose aim, ironically, was to foster “cooperation and coordination” among judicial agencies of government.


That summit could have been the perfect venue for a high-flying statesmanlike policy speech on reforms in the justice delivery system, that could still have hit the SC magistrates but in a refined way. But P-Noy chose to joust in street language, obviously playing to his support base---the masa that largely still adores Kris’ Kuya Noy.
XXX
What triggered this latest broadside against Corona and the SC? I suspect it was the SC’s order to the Department of Agrarian Reform to audit the books of the Cojuangco-Aquino family, to find out, as the Manila Standard put it, “how much of the P1.33 billion gained from the sale of lots within the Hacienda Luisita estate went to ‘legitimate corporate expense.’ ‘’ The Standard asserted that this audit order was made after the SC’s earlier order for full distribution of Luisita lands to the tenant farmers, which in turn prompted the estate’s management to claim that it had incurred P2 billion in debt from industrialist Eduardo Cojuangco and the SMC.

Moreover, the bad-news bears are all over the place and perhaps, by continuing his attacks on the SC and its Chief, P-Noy hopes these won’t hog headlines. Consider the following: the economy dipped to 3.2 percent growth rate in the third quarter of this year, continuing a down-trend; the  deepening poverty and worsening unemployment, as the bishops have pointed out, despite the gargantuan CCT budget supposedly for the poor (P39 billion in 2012); rampant criminality as Star columnist Ernie Maceda unceasingly points out, and foreign direct investments that are the laggard in Asia.

Everywhere one turns, the landscape looks bleak, and it’s high time P-Noy stops his blame-game with the SC and his paranoia with GMA. He has already succeeded in charging her and placing her under temporary hospital arrest, totally deprived of even basic civilities; he should now leave her to the court’s jurisdiction and focus his attention and energies on moving this country forward.

But as he asserted in his MBC speech and again yesterday, “Can the executive fulfill its mandate (to govern), given the current air of judicial uncertainty?” But where is the uncertainty coming from if not from the executive’s policies and its paranoid preoccupation with its single-agenda policy: to jail GMA before Christmas. When that agenda gets stalled in the SC because of majority decisions, P-Noy rants and raves against the SC.

Interestingly, yesterday he blamed the SC for "questioning" the joint DOJ-Comelec investigative panel on electoral frauds of 2004 and 2007, and the legality of the warrant of arrest issued by Pasay RTC Judge Jesus Mupas.

P-Noy admitted he's not a lawyer, but even if he’s not one, had he been better advised, he’d realize that it’s not the SC that’s questioning these issues but the lawyers of Arroyo. It’s they who challenged the constitutionality of the joint panel, on whose investigation the Comelec charge of electoral sabotage was based; in turn, this sabotage charge, based soley on the hearsay testimony of a single witness, became the basis of Mupas’ speedier-than-lightning arrest warrant for GMA.
The fact, however, is that the SC has not yet arrived at a decision on the joint panel’s constitutionality and has set continuation of hearings on it for Thursday, Dec. 8. Wala pang desisyon ang SC, pero baka nararamdaman na ni P-Noy na matatalo ang Comelec sa SC kaya inunahan na niyang banatan ang SC.

﻿
Posted by Veteran Journalist and Relentless Advocate of Truth at 5:02 PM