Fr. Johnny Go’s homily on X’mas Eve last year recalled the “Christmas Truce of 1914” during the trench-warfare era, when fighting soldiers on both sides of the ideological divide stopped the guns for one fleeting moment, to commemorate the birth of Jesus. May this story be a genuine inspiration to Filipinos now also engaged in ideological warfare, to seek a genuine and lasting reconciliation

A Blessed Christmas to all my readers.
I realize that with so many things happening in our country, especially the catastrophe that typhoon Sendong had wreaked in the lives of thousands of our countrymen in Northern Mindanao, and the political storm kicked up by the bullet-train signatures of 188 members of the House of Representatives in impeaching the Chief Justice of the Supreme Court sans verification of the eight-article complaint, plus continuous drizzles and harassing traffic in Metro Manila, things may be far from merry these days. But as a reflection for tonight and tomorrow, Christmas Day, allow me to reprint here a beautiful homily delivered on this same evening exactly a year ago at Xavier School in Greenhills, San Juan. 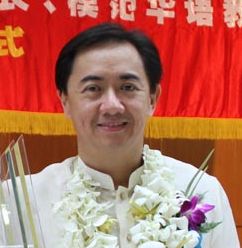 The following homily, titled “”Crossing Lines of Separation,” was delivered by Fr. Johnny C. Go, S.J., president of Xavier School for the past ten years, and it’s the 50th of 50 homilies carefully selected by his friends from so many that he has delivered in various places since 1998, when he was ordained priest in the Society of Jesus. The 50 homilies were incorporated into a book published by Fr. Johnny’s friends in time for his 50th birthday earlier this year.

Written in a style almost conversational and easy to read but profound and  relevant to our times, the book, called “50mething, Pieces of Prayer and Reflection,” is available at popular bookstores. Sales proceeds will be donated to Xavier’s adopted school for the poor, the Erda Technical and Vocational High School (Erda Tech) in Pandacan, Manila, founded as part of the Erda Group by the legendary 97-year old Jesuit Fr. Pierre Tritz, S.J. Fr. Go serves as chair of Erda (yours truly has been its pro bono PRO since the late ‘70s).

I thought that Fr. Johnny's homily is quite apropos not only because it was a Christmas Eve reflection, but also in view of the unilateral ceasefire declared by the government vis-à-vis the NPA for the Christmas season. My prayer is that what became known in history as the informal “Christmas Truce of 1914” between German troops on one side and the British on the other side, during the so-called “trench warfare” era, could be an inspiration for genuine and lasting peace to all Filipinos fighting on either side of the ideological trench.

"How would you like to spend Christmas in the trenches? Imagine Christmas Eve for a soldier who's fighting in a war. It's a bitter cold December night. You and your fellow soldiers are out there in the snow, fighting a war in the front lines with your enemies just a few hundred feet away.

"Not exactly the best way to spend Christmas!"

"But almost a hundred years ago, on this same night in 1914, Christmas Eve, that’s where hundreds of German and British soldiers found themselves. It was the First World War, and in August earlier that year they had signed up to fight for their respective countries. Everyone expected the war to be a short affair, but the war dragged on for over four years. On Christmas eve of 1914, the soldiers of the opposing alliances huddled in the snow-covered, rat-infested trenches, the danger of death constantly hovering over them.

"And then something strange, but something true, happened that Christmas eve of 1914 in the Western Front in Flanders, Belgium--an event that came to be known as the Christmas Truce of 1914.   It had started to snow, and all across the German line, lights began to appear. At first, the British thought their enemy was preparing to attack that Christmas eve, but to their amazement, they saw that the Germans were positioning not guns, but Christmas trees with lighted candles along their trenches. And soon instead of gunshots, they heard singing: Christmas carols in German!


"Hearing 'Silent Night' even in the voice and language of the enemy summoned memories of family and loved ones left behind in faraway lands, and before they knew it, tears welled up in the soldiers’ eyes.

"When the Germans finished singing, the British soldiers broke into applause and then responded with their own Christmas carol. As this incredible, spontaneous caroling went on, food was lobbed into the opposing trenches--an unusual Christmas exchange of gifts in the most unconventional of settings.


“Don’t shoot,” a voice shouted from the German side. “We don’t want to fight today! We will send you some beer!” A German officer appeared and walked out into No Man’s Land. A Captain Charles Stockwell from the British army went out to meet him. As the two army officers saluted each other formally, cheering erupted from both trenches. Hence, began the spontaneous and unofficial Christmas Truce of 1914 in the Western Front.

"But for Christmas, just for Christmas, they crossed the line that separated them, socializing with one another, exchanging souvenirs, photographs, and even playing football! They also spent Christmas day honoring the fallen, burying their dead, and reciting together the 23rd Psalm.


"The next day, December the 26th, the British captain fired three shots in the air while his soldiers raised a white flag that said “Merry Christmas.” The Germans responded by waving a sheet of paper where they had written “Thank you!” Then the German captain fired two shots in the air, and he saluted the British captain. They bowed to each other, and the war was on again.

"For me, this dramatic true story isn’t just about homesick German and British soldiers who decided to celebrate Christmas in this most unconventional setting. It demonstrates to us how Christmas can bring peace and friendship even in the unlikeliest places--if only we let its spirit touch us. But even more fundamental than all that, the moving story of the Christmas truce of 1914, for me, captures the true meaning of Christmas.

"What the Germans and the British did that Christmas eve is a powerful symbol of what God Himself did on the very first Christmas. When God decided to become human like the rest of us, He crossed the line that separated us from the divine. It was totally unthinkable, but through Christmas, God crossed that line in order to become like us. And when God appeared in our midst as a vulnerable infant, it was clear that God had also disarmed Himself.

"In this unprecedented act of self-disarmament, God lay down His infinite powers and crossed the line, so that there would be no more division between the human and the divine.

"Let’s think about this great mystery as we gaze upon the Infant. Perhaps this night, the Lord asks us to do the same, to do nothing less than He has done.

"Could it be that He is asking us to think about our relationships and tonight, just for tonight, to dare to cross a line of separation in our lives--a line that we may have been dreading to cross for some time, a line that separates us from other people? Enemies perhaps, people who have hurt us or offended us in the past, and for this reason, people whom we have been unable to forgive? Or even tougher for us, to cross a line that separates us from people dear to us who have also, for whatever reason, grown estranged from  us?

"This Christmas, the Lord might just be waiting for us to cross that line so that we will no longer be separated from them, whoever they may be.

"Perhaps tonight, just for tonight, the Lord is inviting us to put down our guard, disarm ourselves like the soldiers of the First World War, lay down our arms, set aside our hurts, our anger, our pride, and cross that line of separation... Who knows what Christmas miracles can happen?


"There's a great dramatization of the Christmas True of 1914, a clip from a French-made film called 'Merry Christmas." We have German, Scottish and French soldiers in their respective trenches. The French are bewildered when they see the Christmas trees along the German trenches. Then a German soldier sings 'Silent Night.'  To their amazement, a bagpiper from the Scottish troops decides to provide accompaniment.  That one little gesture leads incredibly to unexpected self-disarmaments and crossing of lines.

"May the Lord of Christmas grant each of us the grace, the courage, and the love to disarm ourselves as He has done so that we can cross the lines we need to cross."
﻿﻿

Posted by Veteran Journalist and Relentless Advocate of Truth at 3:55 PM