Corona under the gun for some time now, but at last Nov. 24’s oral arguments at SC he lectured Sol-Gen Joel Cadiz and DOJ Secretary Leila de Lima on history of the Bill of Rights 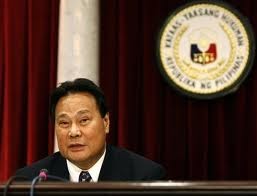 Supreme Court Chief Justice Renato Corona is being pressured by pro-Aquino elements to inhibit himself in proceedings arising from cases filed against former President Gloria Macapagal Arroyo.  The pro-Aquino groups argue that since the Chief Justice had served as former chief of staff and spokesperson of then Vice President Arroyo and then chief of staff for a brief while early in her presidency, until he was appointed SC associate justice in April 2002 (he also served for a time as President Ramos’ legal adviser) and finally  the country's 23rd Chief Justice on May 12, 2010, he cannot be impartial in his vote on cases in the SC affecting GMA.


These groups' hate campaign against Corona is fueled by their fear that he would block the new administration's efforts to put GMA behind bars. They have not let up. In fact their campaign turned even more vociferous in recent weeks, as the issues of the SC’s TRO on the watch-list order of Justice Secretary Leila de Lima against the former President and now the constitutionality of the joint DOJ-Comelec investigative panel---which this blog terms the “game-changer” in the Arroyo arrest---came up.

This issue of the constitutionality of the joint DOJ-Comelec investigating panel is due for decision by the SC any time now, and the yellow crowd fears this issue more than any other. The reason is that if the joint panel is struck out as unconstitutional---like the Truth Commission a year ago---it  could mean that the Arroyo arrest warrant issued by Pasay RTC Judge Jesus Mupas last Nov. 18 would be without any legal basis. This would mean that GMA would be free at least for the moment---until a new case can be built up against her by this administration that's determined to make her jailing its centerpiece achievement.
These past few days the anti-Corona voices have risen to a new crescendo following last week’s unanimous decision of the SC to order the full distribution of Hacienda Luisita’s nearly 5,000 lands to the tenant-farmers. The SC also took up Corona’s suggestion that the compensation for the Cojuangcos be pegged at land valuation rates of 1989--- the year the stock option was offered by the first Aquino administration, contrary to the spirit of the Comprehensive Agrarian Reform Program. Ignoring the fact that the SC rendered a unanimous decision on Luisita, the yellow crowd readily viewed it as the CJ's vendetta for the President's series of snipes against him.
XXX
Should CJ Corona inhibit himself in the GMA-related cases? Of course this is a judgment call personal to him, but in my opinion he should not.
To support the anti-Arroyo groups' presumption that the CJ is incapable of independent judgment, they  offer as evidence his vote in a number of decisions that favored the former President personally or in her presidency.  But so have other justices, including those recently appointed by President Aquino. I refer to the stunning Hacienda Luisita decision (14-0 with one abstention, Justice Antonio Carpio ) and recently the 15-0 decision---so extremely rare in this court that has become famous for colorful behind-the-scenes intramurals---rejecting De Lima’s petition to summon GMA’s doctors to appear before the High Court. The justices obviously realized that GMA’s petition to travel abroad for treatment is based not on her need for it , but on her right under Sec. 6, Article III, the Bill of Rights, of the Constitution.
XXX
The members of the SC are, as a pundit correctly pointed out, “islands” unto themselves in much the same way that the senators are each "an independent republic" unto himself or herself. This is evident in the way they have voted on various issues, and if the fear is that Corona would unduly influence them to a certain direction, that is not borne out in their voting.  In fact, if there are GMA appointees who vote nearly consistently for GMA, there are also those appointees of hers who have consistently vote against her interest.
For instance, in the crucial 8-5 vote last Nov. 15 granting a TRO against the DOJ’s unconstitutional watch-list order, the five who voted against the TRO included, aside from the three recent P-Noy appointments, two GMA appointees:  Carpio, who has almost consistently voted on the opposite site of GMA, and the very last magistrate she appointed in October 2009, Justice Jose Mendoza.
XXX
Ultimately Corona--- who, barring any unforeseen event, would likely stay as CJ until Oct. 15, 2018, when he retires well after P-Noy’s term has ended---will be judged by history, like all SC Chief Justices, on what he says in the Court and how he votes on issues. For the moment, however, he seems to be more intent on preserving the rule of law and the individual’s rights under the Constitution.  At oral arguments last Nov. 24, he took extra pains to discourse on the evolutionary history of the Bill of Rights, seemingly addressing himself specifically to Solicitor-General Jose Anselmo Cadiz, who was on the witness stand, and De Lima seated behind him;  but in reality the CJ was doubtless addressing the Filipino people and history at this crucial period in our nationhood.
Corona recalled the history of the “Star Chamber,” a court of civil and criminal jurisdiction trying especially cases affecting the interest of the Crown in late 15th century England; this chamber gained notoriety as it validated everything that the English King said and did, until it was ultimately invalidated by the Habeas Corpus Act of 1640 and abolished the following year.  Corona traced the introduction of the Bill of Rights in the history of Parliamentary England to the Magna Carta that rebellious barons pressured King John into accepting in 1215 on the plains of Runnymede, outside London.
XXX
Eventually, recalled Corona, the Bill of Rights found its way to the US Constitution---not immediately, as the emphasis in the early years of the young American republic was on the welfare of the majority; but with pressure exerted by American statesman (and eventually the 4th US President) James Madison and other constitutionalists, the Bill of Rights  became enshrined as the “foundation stone of human liberties” in the US Constitution in 1791, one of the first  ten amendments. The framers of the Philippine Constitution copied its concept here, but sadly, these days the value of this codification of the individual's rights has been diminished a lot through the arbitrary application of the rule of law and justice.

Which is probably what prompted Corona---who normally looks quite unemotional and seldom seems agitated by any issue, unlike say, Justice Presbitero Velasco, Roberto Abad or Ma. Lourdes Sereno---to lecture Cadiz and De Lima.  In front of a packed and hushed audience that afternoon at the SC, the CJ asserted  that the name of one fighting for his rights before the courts is not important---"it could be GMA, or Juan de la Cruz, or Mang Pandoy."  What matters, he stressed, is how the Supreme Court would proceed to judge when the rights of an individual crying out for justice, for protection of his or her rights are concerned.


Was Corona merely thinking of his former boss at that moment, as she fought for her constitutional right to travel abroad in order to seek treatment from physicians of her choice? Perhaps. But doubtless he was also voicing the fear of countless lawyers about what appears to be a creeping totalitarianism, that has abridged the rights of those presumed innocent until proved guilty and twisted prosecution and court procedures to suit its purposes.
XXX
Tomorrow, Friday, Dec. 2,  is a very special day especially for our young people.  The Philippine Youth Symphonic Band (PYSB) will be performing at the Ayala Triangle, Ayala Avenue , Makati City at 7:30 pm., with Cris Villonco and baritone Andrew Fernando performing for PYSB’s friends, benefactors and the Makati Public schoolchildren. PYSB, which is being supported and promoted by the civic organization called the “Young Musicians’ Development Organization (YMDO),” led by my niece, Maja Olivares-Co, will also be playing re-settings of familiar Pilipino “play songs” from its CD “Laro: Child’s Play at the CCP” which was recorded by YMDO Live during the band’s concert at the CCP last November 27, 2010. The band has made Sitsiritsit/Leron-Leron Sinta, Sarung-Banggi, Dandansoy, Tongtongtongtong Pakitong and Penpen De Sarapen fun again, and as its promoters rightly assert, these all-time Pinoy favorite ditties will reclaim their place in our children’s memory.
The YMDO promises that tomorrow’s performance at the Ayala Triangle, Ayala Avenue, Makati, will be a joyful holiday celebration “of musical gifts by the most gifted.” Come and hear the PYSB! It’s open to one and all and entrance is free.
For comments/reactions, please email:
polbits@yahoo.com
Posted by Veteran Journalist and Relentless Advocate of Truth at 12:05 PM