Too much, too early hyping about X’mas. Banat muna tayo ng buto. For instance, let’s finish all the road repairs on EDSA and elsewhere in the metropolis, to avoid even more monstrous traffic jams toward X’mas 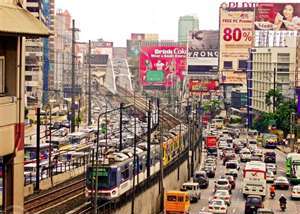 Four comments for this weekend:
One, the way the Aquino administration is splitting hairs over the illness of former President Gloria Macapagal Arroyo is just unbelievable and utterly unchristian. The Palace spokesperson was quoted as saying that the  condition of the late President Cory Aquino, which necessitated her family's asking the  Arroyo administration to allow posthaste the entry of a machine critically needed for her operation in 2008, was "different" from that of GMA and the two couldn't be compared. But as a civic leader I know put it, what's the difference---an illness is an illness and GMA is quite ill. As GMA put it, the doctors here, despite their best efforts, do not have a full idea of the "rare bone disease" that afflicts her and she naturally wants to seek medical help abroad.

Let's pray that this administration has not forgotten what it means to be Christian. P-Noy should allow her to go abroad for treatment or he will be condemned in the eyes of his fellowmen.


Two, it would be unchristian to say anything about the terrible mess the Revilla family got itself into, considering the recent tragedy that struck it. One can only offer sincere condolences to its members. But this tragedy also only heightens the age-old verity that raising a family is most serious business. If one takes it lightly, trouble would surely overtake it.
XXX
Three, last week Cecile Alvarez and I featured the appeal of Batangas Rep. Hermilando Mandanas, chair of the powerful ways and means committee in the House, to local government officials to support his campaign to bring back what rightfully belongs to the LGUs---approximately P500 billion in the Internal Revenue Allotment (IRA) that the national government owes them as “IRA backpay” over the past nearly twenty years since 1992.

Mandanas argues that since 1992 the national government has been hijacking IRA funds of LGUs, despite the mandate of the Constitution and the Local Government Code (now celebrating the 20th anniversary of its enactment into law) that their just share of  40 percent should be “automatically released to them.” He stressed that for 2011 alone, P68 billion of IRA remain unreleased, and so are the LGUs’ share of Bureau of Customs tax collection on imported goods and other local revenues.
XXX
The third-term Batangas representative has championed the just share of the LGUs since he was a three-term governor. In fact in 2004, as governor he filed a case before the Supreme Court to press the executive branch to release the IRA funds to Batangas, and he won. He feels that since President Aquino is a partymate, it's opportune for LGUs to press their case with P-Noy now, and Mandanas promises full support for them.
I spoke to some local officials about this and they’re happy about his championing of their cause, but I also felt  that many of them are afraid to come out in the open, realizing that various administrations have tightly held on to the LGUs' share of funds for CONTROL and DOMINATION of local politics.
XXX
I recall that in the early GMA years, then DILG Secretary Joey Lina pointed out to me how GMA gave back the funds due the LGUs. Mandanas, confirming this, stressed that GMA agreed to issue promissory notes to the LGUs and this helped them build school-houses, health centers, infrastructure and other projects.  This was perhaps also the reason why she drew formidable local support in the critical times when political opponents attempted to force her out of office.
But the problem of tight control by the national government of local funds persists to this day, and local officials should join Rep. Mandanas in this issue if their constituents are to be helped meaningfully. As the full page ad he recently put out with the help of supporters said, “LGUs know that our people are in need of help---P500 billion now! LGUs know that the President wants ‘Matuwid na Daan’ now! Finally, if not done now, then when? If not you, then who?” 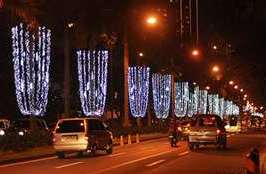 I had a bit of argument with a friend about the recent launch by shopping malls and commercial districts of Christmas lights all around the metropolis last Nov. 3, the day after All Saints’ Day.  Just after Undas, commentators were already breathlessly exclaiming that it was only 53 days to Christmas---and counting daily! My friend argued that hyping up Christmas quite early is good for business, and people want to start shopping early anyway. He noted that we Filipinos hold the longest Christmas observance in the world, as in fact  Christmas carols begin to be heard over radio as soon as the first "ber" month (September) sets in.
XXX
I argued that while there's obvious need for our people to be cheered up with the thought of Christmas, given all the problems we have had to cope with, such as the typhoons and the huge floods in Central Luzon, too much and too early Christmas hyping could be counter-productive. In fact I confessed to feeling quite uneasy about this “longest Christmas” achievement in the Guinness Book and I’m sure foreigners here do consider us a little silly for such emphasis.


Not too long ago, a foreign executive based here complained how each year he could barely get people in his office to concentrate on their work in late November---there’s too much emphasis on the Christmas party, the exchange gift, etc.  He wondered whether all the early festive hoopla is not a kind of escape from the problems the country faces.  I said there's definitely that.
XXX
I'd like to pitch for some kind of sobriety on this issue---some balance between our unique over-eagerness for Christmas and the need of our people to sharpen our work habits and discipline. We ourselves always note this lack in seminars on “Pinoy-isms,” don't we? I feel that instead of always being lulled into a "fiesta atmosphere"---such as Christmas in September---we should emphasize other “preparations” that could make our Christmas truly meaningful.


Churchmen would emphasize the spiritual aspect of Christmas, for instance---how do we prepare for the coming of the Christ Child who ought to be the central focus of this beloved season. I"m game for this too, but one thing I’d also like is to see our officials FINISH BEFORE Christmas all the road repairs now causing horrendous traffic all over the metropolis. If these repairs are not finished by the first week of December, we can be sure of EVEN MORE HORRENDOUS TRAFFIC as the Christmas season goes into full swing. It’s the traffic jams that cause people to curse under their breath while trying to enjoy  Christmas---when a little forward planning could mitigate it.
XXX
Snarling traffic on Edsa are many pocket diggings by MWSS.  There’s also the terrible jams caused by endless repairs in the McKinley area leading to Fort Bonifacio and C-5: the cementing of this short but very busy street was finally finished early this year, after months of interminable work. But now they've dug it up in some areas again. If it’s not the PLDT it’s the MWSS or something else---absolutely no planning or coordination between them.  At this point I can only sigh as I recall how the folks of Fukushima in northern Japan fixed their highway in one week, right after the killer quake!
I hate to sound like Scrooge, but this is what we ought to emphasize at this point, so that we can all have a merrier Christmas.
For comments/ractions, please email:
polbits@yahoo.com
Posted by Veteran Journalist and Relentless Advocate of Truth at 9:04 PM