Tomorrow’s SC en banc session could produce the real game-changer---the declaration of the DOJ-Comelec’s joint investigating panel as unconstitutional. Will this happen? Abangan 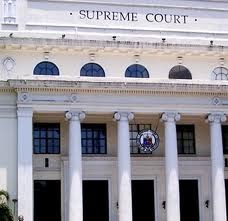 ﻿
﻿Last Friday afternoon, Palace Spokesperson Edwin Lacierda, in his seemingly interminable press conference to help dribble the Supreme Court’s TRO while waiting for Pasay RTC Judge Jesus Mupas’ arrest warrant for former President Macapagal Arroyo, told media that the electoral fraud case filed before that court earlier that day was the “game changer.” In a way it was, for at that point Lacierda didn’t have to justify the Palace’s defiance of the TRO in inane arguments such as, that one condition of the SC remained unmet by the Arroyo camp.  As though it was the Palace’s concern to make sure that that condition of the SC was met!
The real game-changer, however, is what could transpire tomorrow morning (Nov. 22) at the High Court's regular en banc session, when it takes up the “very urgent motion” filed by the Arroyo camp. The motion seeks to have SC declare as unconstitutional the joint panel of the DOJ-Comelec that investigated the alleged electoral frauds committed by  Arroyo in the 2007 elections.
﻿﻿﻿This en banc session should not be confused with the hearing the SC will hold also tomorrow (it's going to be a frightfully busy day for the justices) at 1:30 pm. Tomorrow afternoon will feature oral arguments by both government, led by Solicitor-General Joel Cadiz, and the Arroyo camp, led by legal eagle Estelito Mendoza, on the constitutionality of DOJ's Circular No. 41, which became the basis of Secretary Leila de Lima's order to put GMA in the watch-list order. De Lima's action in turn was what the SC struck down with its TRO last Tuesday which the feisty Secretary, however, defied---preventing the Arroyos from leaving for Singapore.

XXX
Why do I call the SC's ruling on the DOJ-Comelec joint panel the game-changer in the running battle between the administration and GMA's camp?
﻿
To begin with, this panel’s investigations became the basis for the electoral sabotage case against GMA, former Comelec Chief Benjamin Abalos and former Maguindanao election supervisor Lintang Bedol, which the Comelec hammered out in a rush en banc session at 7:30 am. last Friday. Chair Sixto Brillantes and four Commissioners signed the charge resolution while two other Commissioners refused to sign as they claimed it was just given to them that morning and they hadn’t read it yet. Media rumors swirled that the poll body Chief was compelled to check out of a hospital the evening before, so he could preside at that rush session.

The joint DOJ-Comelec case was based on the testimony of former Maguindanao election official Norrie Unas who claimed he had “overheard” GMA telling the then governor Andal Ampatuan Sr., “O, 12-zero tayo sa Maguindanao, ha?”  (But snorted a prominent opposition figure, hearing of Unas’ claim, “But don’t all of us politicians order our leaders---na i-zero ang kalaban?”).
XXX
That celebrated Comelec case---a three-page resolution accompanied by eight folders each as thick as a fat telephone directory that took several men to carry---was filed at noon Friday at the Pasay RTC. Judge Jesus Mupas of Branch No. 112, to whom it was “raffled” electronically, after perusing the case with remarkable speed of just an hour, concluded that there was “probable cause” and promptly issued the arrest warrant against GMA and the other co-accused at 3 pm. that day.  For this judge,it was all obviously within a day's work.


Two hours later, officers of the Southern Police District in Fort Bonifacio  served it on GMA at her hospital suite and the following day her mug-shots and fingerprints were taken, which effectively began the judicial process of her case. A newspaper today showed a detention cell being prepared for when GMA is ordered to leave her St. Luke’s Hospital confinement.
XXX
What's the significance of tomorrow’s SC en banc on Arroyo's “very urgent motion” to have the DOJ-Comelec joint panel held unconstitutional? Should such a decision happen, it means that the electoral sabotage case filed by the Comelec before the Pasay RTC and the subsequent arrest warrant from  super speed-reader Judge Mupas would all be rendered MEANINGLESS, as the investigating panel that built up this Comelec case would no longer have any justification for its existence.
From what I gather, the main argument of GMA's lawyers in their urgent petition is that Comelec is a constitutional body (i.e., established by express provision of the Constitution) and therefore it should  be independent and has no business partnering with an agency of the Executive branch such as  the DOJ.  On the other hand, government lawyers argue that under RA 9369, Comelec is allowed to undertake investigative work together with executive agencies.
XXX
I asked veteran lawyers just when the SC could hand down its ruling on this “game-changer” issue and they said it depends on how quick the SC finishes its closed-door deliberations. Should it rule that the joint panel is unconstitutional, GMA would go free and could finally seek that treatment abroad which she was frustrated from getting since last October when she first applied for it, and highlighted by the defiance of the SC TRO last Tuesday up to Friday. Reports from St. Luke’s indicate, indicate, however, that her health is quite unstable now following the terrible stresses she underwent, so that a trip abroad, even if allowed, might not be an option at the moment.
XXX
News reports cited Comelec Commissioner Rene Sarmiento, one of the five signatories to the case filed at Pasay RTC, speaking of the distinct possibility that the SC would rule the joint panel as unconstitutional;  should that happen, he said, the Comelec would be forced to conduct investigation on the electoral fraud charge by itself, but that it wouldn’t be starting from zero as certain affidavits have been filed already.

For Comelec to go into investigation by itself would definitely mean that more time would be needed to put this electoral fraud case against GMA together.  But Sarmiento's assurance is reassuring, as it means that in this aspect Comelec will respect due process.

But what are the chances of the SC ruling the joint panel unconstitutional? Some lawyers I spoke to said the SC could go either way. Another said it's a long shot for the GMA camp.


But the nagging query still, following the DOJ’s unbelievable defiance of the SC's TRO last Tuesday up to Friday is: assuming the SC indeed comes to an unconstitutionality decision, what if the grandstanding Secretary De Lima again decides to obstruct this latest one and posts truncheon-wielding police around the hospital, like what she did at the airport last Tuesday?
I queried a veteran legal luminary and his quick reply: "a  eh, gulo na yan talaga." Let’s hope that De Lima would uphold the SC decision whatever it may be, for the good of the country we all love.
XXX
Tomorrow’s en banc session by the SC will be closely monitored especially by lawyers all around the country who are now all recovering from their shock at the DOJ’s defiance of the High Court’s TRO ruling---that brought us to the brink of a constitutional crisis. More and more lawyers’ groups are speaking out against the DOJ’s move, among them the Philconsa that’s dominated by lawyers, the Integrated Bar of the Philippines, and various law school deans as well as legal writers such as Star’s Joe Sison.
This is doubtless because they realize that the SC is the ultimate bastion of our rights and if its legal and moral authority is eroded, then the nation suffers.  Where will the citizens go for final redress of grievances?


As Cito Beltran argues very well in his Star column today, this is the same SC that protects the ordinary citizens---by means of the TRO--- from unjust taxes of the BIR, or oppressive toll fees by Tollway operators,  or impositions of the Meralco and Telecom companies, etc. Continues Cito: “Now is the time when our courage will be tried and our institutions tested. Will the Supreme Court punish Secretary (Leila) de Lima as they should and do they have courage enough to discover if our institutions are strong and true enough to overcome political bravado and animosity. We will learn in a matter of days.”


Well-spoken, Cito, your old man Louie would have been proud of you for standing up to your beliefs.
For comments/reactions, please email:
polbits@yahoo.com
Posted by Veteran Journalist and Relentless Advocate of Truth at 6:02 PM