De Lima more worried about her public image for her senatorial run in 2013, than about dispensing justice to GMA. Meanwhile, thugs continue to stage cell-phone hold-ups in buses and break car windows in popular restos and bars, to steal laptops 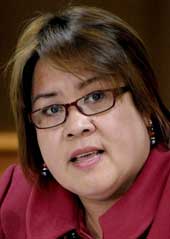 What this administration is doing to the Arroyos is simply unbelievable, especially as the nation remains very much in the spirit of the recently concluded Undas, sacred to all Filipinos.  In this season we normally ponder on the meaning of life and the afterlife, and we tend to be kinder and softer on those who are suffering illnesses and even the loss of loved ones.  But the difficulties laid one on top of the other across the path of the Arroyo family, which seeks to get medical help in foreign lands for former President Macapagal Arroyo, are incredible to believe of a Christian leadership.
XXX
In the first place, the St. Luke’s Medical Center (SLMC), which is respected globally, has already suggested in its medical abstract (this was confirmed by SLMC’s public relations officer Marilen Lagniton) that GMA submit to a bone biopsy that's not available in the Philippines. The SLMC abstract said it’s not ruling out a rare metabolic bone disease in GMA and it’s hard to imagine that this world-renowned hospital would go along with the deception game the Arroyos are apparently being suspected of playing by the Aquino  administration.
Justice Secretary Leila de Lima, in playing to the gallery for her senatorial ambition in 2013, had to get Health Secretary Enrique Ona to verify the SLMC’s suggestion by having him pay a visit to GMA.  In a crazy passing-the-buck game, the Palace has left the decision to allow or disallow GMA’s foreign medical trip to De Lima,  who now is obviously trying to escape public judgment in either case; so she passed the ball to Secretary Ike Ona who, after his visit to GMA, failed to categorically state that she SHOULD NOT get the bone biopsy abroad.

In his recent column in the Manila Standard, GMA’s former Deputy Press Secretary Gary Olivar pointed out the difference in the case of the late former Sen. Ninoy Aquino and of former President GMA.  Olivar stressed that when Ninoy Aquino faced medical emergency in the late ‘70s, “he had been duly convicted of capital crimes under the law and had already spent years in prison.” He was then allowed by President Marcos to go to Texas with his family for his heart bypass surgery. By contrast, argues Olivar, GMA has faced “only interminable trial by publicity so far.” He asserted that “None of the plunder cases filed against her have gone beyond the preliminary investigation stage---because of insufficient evidence, as the government itself has admitted," and that the electoral fraud case "is still awaiting a showing of probable cause.”


One might add that in fact Comelec Chair Sixto Brillantes was recently still calling for witnesses to corroborate the Maguindanao administrator's  affidavit that the Arroyo couple was allegedly involved in electoral fraud. That's how indeterminate it is.
XXX
Congressional leaders led by Speaker Feliciano Belmonte and Senate President Juan Ponce Enrile and even Sen. Franklin Drilon, President Aquino’s dogged ally in the Senate, have all argued to let GMA seek medical help abroad. Several bishops formerly critical of GMA have joined this appeal. The administration should listen to them. Sadly, however, it prefers to go into endless harassment and persecution tactics against the Arroyos, for which it’s squandering precious political capital.
As Secretary Ona noted, the former President is not in any immediate threat to her life, but from what I gathered, the Arroyo family wants to try foreign treatments, such as stem cell in Germany, as she’s not recovering well enough here. And they are entitled to this choice. If the P-Noy administration is seeking resolution of the cases against GMA, it would in fact be in its best interest to have her recover faster, so that the court battle can begin.


But apparently the administration prefers to first whip up the scare that she might not return---part of the continuing shame campaign. But on this score, as Archbishop Oscar Cruz argued, she would look guilty and reap the condemnation of history if she takes to fugitive flight. I think GMA knows better than to do this.


A now-retired high-ranking judiciary official opined to me several years back that GMA stood a good chance in court, for in many of the cases the evidence is weak. That was three years ago, and realistically things might have changed as more evidence came out, but I still believe that rather than flee abroad, GMA---the fighter that she is---would want to battle it out in court and clear her name. But understandably she needs and wants to be stronger for it.
P-Noy should let GMA go abroad, the way Marcos allowed his father to go. It is her CONSTITUTIONAL RIGHT to travel, as constitutionalist Joaquin Bernas has argued---given the preliminary stage of the cases against her. If she is denied this right, she should go to the Supreme Court.
XXX
There is no doubt that criminality is on the rise in our times, and glaring evidence is the occurrence of a number of high-profile cases landing on various front pages recently. But equally disturbing is what happens to the security and welfare of the common tao.
My gardener, Nonoy, who goes home to Quezon City, narrated to me a frightening happening inside the bus he took the other day---a hold-up was staged by what was obviously a group of men armed with balisongs, victimizing especially cell-phone holders. The passengers in the bus were so frightened that they themselves cajoled their fellow passengers from whom cell phones were being seized to just surrender those to the thugs, rather than risk everyone’s life in the bus. Cell phone lang yan, they argued, wag nating gawing kapalit ng buhay.
What I found pitiful about Nonoy’s story was the utter helplessness of the passengers and their resignation to such fate, especially since the conductor and driver didn’t move one bit.  He noted that hold-up gangs usually board at Guadalupe and spread themselves in the rear; after quickly disarming the passengers they alight at SM Megamall or the EDSA Shrine and disappear into the crowds.
XXX
P-Noy and law enforcement authorities have to do something about criminality, petty or big, as it leaves the citizens so helpless, and having to bear the terrible dangers to their lives along with rising inflation, the horrific traffic and other woes of metropolitan living. I pity especially on the poor for whom  cellphones have become a necessity purchased from hard-earned pittance pay.  I also note that many bars and eateries in the city are victimized by gangs that break windows of patrons' parked vehicles and steal laptop computers inside. Laptops are another favorite of robbers because of the facility with which to sell them.  The police have to put more roaming patrol cars in popularly patronized districts.
For comments/reactions, please email:
polbits@yahoo.com
Posted by Veteran Journalist and Relentless Advocate of Truth at 6:06 PM