After the Dominican Republic’s Foreign Minister denies talk of Arroyo plea for sanctuary, De Lima is unrepentant about her rumor-mongering; Gabby Singson and Totit Olivares share their love experience in caring for their departed spouses over dzRH, as part of our Undas commemoration 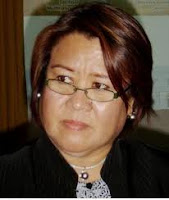 For days Justice Secretary Leila de Lima and Palace Spokesperson Abigail Valte kept alive the rumor that former President Macapagal Arroyo has sought asylum in the Dominican Republic. But after no less than that Carribean country’s Foreign Minister denied this rumor, De Lima was forced to admit she did not have any proof to support this claim.
Now she says she’s trying to verify two other countries that could provide it. Pressed for details by the media, which had suffered a kuryente in the Dominican float, she was then quoted as saying “I don’t need to produce any evidence at this point. But it’s my duty to verify these information (sic).” Sure it’s her duty to verify such information, but to float it without any basis is irresponsible rumor-mongering and  gives this government a black-eye as purveyor of rumors and gossips.
XXX
Would Leila apologize for it? Not on any one’s word. She was appointed Chair of the Human Rights Commission by GMA, where she was eager to stress that “human dignity and the rights of individuals will always need to be safeguarded against violations of the State, armed opposition groups and private sectors…we draw strength from our shared convictions and the common realization that human rights must be respected, protected and fulfilled everywhere in order to achieve true peace, prosperity and lasting peace.” Now, ironically, she’s violating the Arroyos’ human rights to please her boss and be able to continue bagging headlines for 2013.


XXX
Like other Filipinos I’ve argued that Christian compassion dictates that GMA should be allowed treatment abroad, as her rare metabolic bone illness does not offer any holistic treatment here.  St. Luke’s Hospital, which has already operated on her three times, is the first to acknowledge this.
Frankly I find ridiculous the argument that the Arroyos would not come back if allowed to leave for abroad;  they are both quite ill (Mike Arroyo has his own heart problem) and permanent refuge in another country would even be more difficult in their condition. There's no comfort like what Ph offers. Besides, if GMA and Mike Arroyo were to really flee for good, there are ways to get back at them---the government is not as helpless as Solicitor-General Cadiz is trying to impress the Supreme Court about, to forestall a TRO.
As Sen. Ed Angara, who has joined other senators in arguing to let GMA seek treatment abroad for humanitarian reasons, noted, the world is a global village and nowhere can the Arroyos attempt to hide if they wanted to. Besides, they'll reap international opprobrium for it. Government could also cancel their passports and even sequester their properties here.
No, I believe GMA would want to clear her maligned name. Helping that resolve is the fact that despite P-Noy 's  having been in the saddle for a year and a half now, his people haven't gone beyond “preliminary investigation” in her cases.  P-Noy's allies are quite upset over this turtle pace of the cases, but  for GMA's lawyers, this  is indication that those cases are rather weak. It’s this administration that’s seeing shadows.
XXX 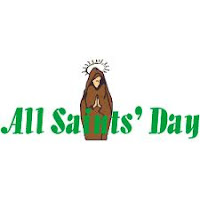 In closing this year’s observance of All Souls’/All Saints’ Day I decided, in the absence of my radio partner Cecile Alvarez (who was in Paris attending a Unesco conference), to depart from our customary “Paaralang Bayan,” on dzRH every Sunday at 8 pm. Last Nov. 6, I requested two men who lost their spouses in recent months to prolonged illness to share with our nationwide audience the transforming fulfillment they had experienced in being given the grace to care for their loved one.
Former Central Bank Gov. Gabby Singson and my elder brother Luis “Totit” Olivares, Jr. had been married to their spouses for many years and I thought they lived so well that part of the marriage vows (which sadly doesn’t seem to hold meaning in many cases these days) that says…”in sickness and in health..till death do us part.” I also invited marriage counselor Neomi Tanedo Olivares, wife of my brother Danny Olivares, to put our “Undas” observance in the perspective of our culture and spiritual life.
XXX

Gabby Singson’s late wife, the vivacious and gracious Moonyeen Retizos-Singson, was diagnosed with 4th stage colon cancer in July 2003;  but with expert medical treatment in Singapore and with the loving support of her husband, their three children and relatives and friends, she was able to courageously battle the Big C for eight years, passing away last July 13, 2011.
Gabby and Moonyeen were an office romance (where else, but at the Central Bank) and they were married for almost 49 years. In our sharing he spoke of his fears as her condition deteriorated; with some amusement he recalled what she told him just ten days before she died, after their joint nightly prayers, "Papa, mas takot ka pa sa akin. Don't be as I am not afraid." Besides, said Moonyeen, “We’ve had a good life together.”
The venerable CB governor, who was instrumental in instilling crucial reforms in the banking system in his 43 years in government service, said that after his wife became ill he rejected any appointment to be able to take care of her and enjoy their years together. They did a lot of travel abroad which they loved, and the family developed a property in Calauan, Laguna into a resort with huts and pools, primarily to enable her to enjoy the clean air and get some exercise.  Today, this place, called "Field of Faith" and run by the Singson's only daughter, Carissa Mabasa, is popular for spirititual retreats and conferences.
With her passing, Gabby confessed that he found hardest adjusting to her not being around, missing especially her perpetual sense of humor. Two hours or so after she passed away, he received a condolence text from former Ateneo President Fr. Bienvenido Nebres, then in Spain on his 33-day pilgrimage to Santiago de Compostela. Gabby’s first impulse was, “I’ll tell Moonyeen about it,”  then he realized, “Ay, wala na pala si Moonyeen.”
His parting shot to our audience: “You never realize how much you love your wife until she’s gone and then you find yourself asking, did I do enough for her?” I’m sure Moonyeen had no doubt whatsoever about her husband’s devotion.
XXX 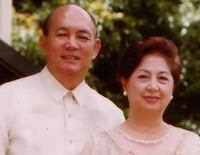 Totit Olivares, a graduate of the Ateneo University and Fordham University in New York, was a legend in wifely devotion in our family as he would unfailingly accompany his wife to her dialysis treatment over five years, until she was stricken with a heart attack that confined her to the ICU for 17 days and she passed away last August 2010. Rosario “Nena” Barreto-Olivares was a beauty and brains combination, graduating as summa cum laude in accounting and topping the board exams.
In her 17 days at the ICU he and their six children, majority of whom live in various parts of the world, camped out in the visitors’ lounge next to it, taking turns to watch over her; but accepting the reality of her passing proved difficult for everyone, especially since the couple was due to mark their 50th wedding anniversary in June this year. Totit recalled how hard he prayed to God to just let them enjoy Nena for a little while more; finally, it was down to one request: to be able to celebrate that Golden Wedding. But it was not meant to be.
Seeing his family quite distraught over his wife's passing, he decided last May to invite his children and their spouses and kids, to join him on a pilgrimage to St. Padre Pio in Pietrelcina, Italy, to whom he and Nena had a big devotion. That experience seemed to erase all the bitterness and grief from everyone, and they happily travelled around Italy, timing it so that they wound it up on June 10, the couple’s 50th anniversary. He had specified to his children to arrange dinner that evening in a “very romantic place” and their choice was a small hotel with home-cooked food on Lake Como, just outside Milan. With the beautiful moon coming out after a rainy day they gathered around the dinner table by candlelight, with the photo of Nena smiling at them.
XXX

Tune in tonight at 8 pm. as Cecile and I host another “Paaralang Bayan,” with computer expert Jun Estrella discussing the shortcomings of the May 2010 automated elections and Comelec spokesperson James Jimenez speaking for the poll body. Former Biliran Rep. Glen Chong, who has a pending electoral protest with the House Electoral Tribunal, corroborates Estrella’s assertions.
For comments/reactions, please email:
polbits@yahoo.com
Posted by Veteran Journalist and Relentless Advocate of Truth at 7:53 PM