“We have to help our country love itself again”---says new Ateneo president, Fr. Jett Villarin

Last Thursday, Sept. 8, Feast of the Nativity of the Blessed Virgin Mary, I attended the investiture of Fr. Jose Ramon “Jett” Villarin, S.J. as the 30th President of the Ateneo  University. My family has been in the Ateneo for at least three generations now, and I myself had worked in the Ateneo College of Law as assistant to its late Regent, Fr. Pacifico  Ortiz, where I also had the privilege of interacting with then Ateneo President Francisco Araneta (Fr. Ortiz eventually also became President of the university). So the investiture of the new president was a must for me.

﻿
﻿Last Thursday was momentous as it was a changing of the guard. The lanky, ascetic-looking Fr. Bienvenido Nebres, 71, who had served as President for 18 critical years in the nation’s history (“far too long,” he quipped to Cecile Alvarez and me in our dzRH interview many months ago) was turning over the university mace to a short boyish-looking scientist  20 years his junior, who enjoys playing the piano and his guitar to relax.

A rite of passage always heightens expectancy, especially in the case of the recent investiture at the Ateneo, which saw the end of the longest-running presidential tenure in its 152 -year history, and the coming in of perhaps the youngest president at least in contemporary times. One felt the excitement among the academic cap-and-gowned community assembled at the Henry Lee Irwin Auditorium as well as in the students gathered at the Ateneo Gym, watching from giant TV screen.


The festivities began the evening before with an elegant concert by various campus choral groups at the Church of the Gesu (where, among others, one of my favorite songs, “Light of a Million Mornings,” was beautifully rendered by the Ateneo Glee Club). Thursday began with the solemn mass of thanksgiving, ushered in by the impressive processional of all the Loyola Jesuits led by Provincial Superior Jose Cecilio Magadia, followed by the investiture ceremony and dinner.

It was also the first time that the President of the Republic had graced an Ateneo investiture, administering the oath of office in Filipino to the incoming school prexy. Perhaps in the excitement of the moment Villarin, garbed in the black and yellow robe of his Ph.D alma mater, Georgia Institute of  Technology in Atlanta, forgot to acknowledge the presence of Chief Justice Renato Corona seated on stage with P-Noy and school dignitaries; but the CJ took it gracefully, smiling at the jokes the new Ateneo exec cracked.

Checking out the biographies of Villarin and and his predecessor, one easily concludes the generation gap; but actually their lives intersected quite closely. Both are scientists and the fact that they succeeded each other augurs well for a much-needed impetus to the sciences here.

Fr. Nebres chalks up among his numerous accomplishments his being a founder of the “Consortium” of leading universities in Manila to develop Ph.D. programs in math, physics and chemistry, with the view to developing here a critical mass of scientists in these areas. Evidently, as Ateneo College Dean he had already spotted the young  Villarin who in 1980 graduated with a BS in Physics, magna cum laude and class valedictorian. Thus later, as Jesuit Provincial Superior, Nebres turned down the request of the latter, by then a newly-ordained Jesuit, to be assigned to Mindanao with his brother scholastics out on regency. Instead the Superior gave him a physics book and said, ‘You go to Marquette University and study.” “Had I not gone there,” the new Ateneo prexy mused, “I would have lost my interest in science.” 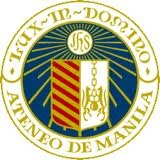 The new President's investiture speech listed three “strategic concerns” of the Ateneo as a Jesuit, Catholic and Filipino university: namely, its identity and mission, nation-building, and environment and development, or as he put it, "God's creation." His scientific background studded his speech with environmental images of the nation, e.g., referring to it as “a garden that has been given to us in trust," so that “we cannot leave this garden, the way it is now, to our children.”


Villarin emphasized, among other things, the need to realize that the use of non-renewable resources for fuel development "has begun to tax the carrying and replenishment capacity of certain crucial reservoirs or lifelines of the earth," and he called on the academic community to help dramatize this crisis. But his environmental wish-list also detailed practical concerns for society: e.g., “we need to plant forests, not trees,” and “we need more parks, not more parking.”

Villarin’s election to the helm of the country’s leading private university also comes at a most crucial time---when our top four universities (the others being the UP, De la Salle University and UST) fell in ranking among the world’s top universities for 2011-12, according to the London-based Quacquarelli Symonds (QS), a company specializing in education and study abroad. UP fell 18 points, from 314th last year to 332nd this year, while Ateneo registered an even bigger plunge of 53 points, from 307th last year to 360th.  De la Salle University and UST scored even more dismally, with DLSU dropping from the 451-500 bracket to the 551-600 bracket and UST from the 551-600 bracket last year, to be stricken off the top 600-list this year.
XXX

It hurts that as our leading universities have fallen from academic grace in the QS ratings, a number of universities from Asia such as in Hongkong, Singapore, Tokyo, Kobe, Seoul and one or two from China landed among the TOP 50, alongside European and American schools (topnotcher for the second straight year is the University of Cambridge in the UK, followed by Harvard, Massachussetts Institute of Technology and Yale in the US, and Oxford in UK).

The deterioration in higher education---as well as in education in general---is attributed to the decreasing support from government, as evidenced by sharp cuts in the budget of the UP (from P6.9 billion in 2010 to P5.53 this year---or P1.39 billion less), and the 112 state colleges and universities (from P23.8 billion last year to P23.4 billion this year---or P400 million less). TESDA, the critical vocational training ground for the less privileged, also saw its budget slashed even bigger.


As AGHAM party-list Rep. Angelo Palmones notes in our dzRH program (to be aired tomorrow night, Sunday, Sept. 11 at 8 pm.), it should not surprise anyone that our universities have fallen in the QS ratings, as there has been little government support for them. Palmones stresses that thanks for the rallies staged by UP students and state colleges and universities, their budgets were restored to a certain degree, but he also lamented that a measly P9 billion or 0.01 percent share in the GDP is allocated to scientific research, including those of Pag-Asa. On the other hand, the administration wants to increase the conditional cash transfer (CCT) funding to P39 billion for next year, despite DSWD's failure to properly monitor the funds and defective listings of beneficiaries.

Posted by Veteran Journalist and Relentless Advocate of Truth at 7:21 PM